This is bad news for Intel and great news for AMD

Intel has released an official HPC roadmap, hidden in a Chinese presentation titled "Intel High-performance Computing and Intelligent Computing" (available here), which details the company's release plans between now and 2020 for their Xeon Scalable platform.

This roadmap reveals some bad news for Intel, that the company will not be shipping any 10nm Xeon Processors until Q1 or Q2 2020, around a year after AMD's release of 7nm, which is roughly equivalent to Intel's 10nm, Zen 2-based EPYC 2 processors, giving AMD a significant advantage in 2019 thanks to their use of advanced process technologies.

In 2019, Intel will be forced to compete with EPYC 2 on today's 14nm technology with Cascade Lake-SP and later Copper Lake-SP processors, giving AMD a potential advantage in terms of power efficiency and die size thanks to their use of a 7nm process node. This will, in turn, give AMD an opportunity to steal a lot of market share from Intel within the server market, springboarding off their success with today's EPYC processors with what is expected to be a significant performance leap.

At this time, it is unknown what Intel's 10nm plans are for the desktop market, as the company typically uses their latest process technologies on their desktop processors first, moving to large die HPC processors after they achieve optimal processor yield rates. This manufacturing trend suggests that Intel's 10nm desktop processors will release sometime in the second half of 2019, assuming that Intel is continuing their standard release schedule for new process nodes. 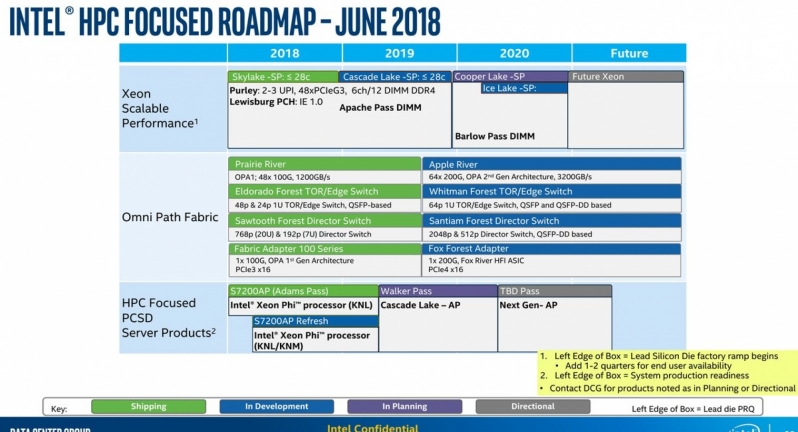 You can join the discussion on Intel's 10nm Ice Lake-SP processors releasing in 2020 on the OC3D Forums.