Intel's due to release "Tiger Lake client" processors this summer

Intel's due to release "Tiger Lake client" processors this summer

During the company's Q1 2020 financials report, Intel confirmed that its upcoming Tiger Lake series of "client" processors would release in mid-2020, signalling a release this summer.

Note that while Intel uses the term "client" here, it is unlikely to refer to desktop series processors. So far, Intel has only announced mobile-oriented Tiger Lake series processors, though he architecture is also likely to be used in future NUCs and other low power devices.

Intel's Tiger Lake products will be the first to use Xe-powered integrated graphics, which promise to deliver Intel significant performance benefits across a wide range of applications. Furthermore, Tiger Lake is also due to deliver higher CPU clock speeds than Intel's Ice Lake offerings, and also offer increased IPC to enable a significant performance increase over the company's existing offerings.

What remains to be seen is whether or not Intel can manufacture Tiger Lake series processors in high enough numbers to have a large impact on the mobile CPU market. Intel has only just released its Comet Lake series of processors into the high-performance mobile market, an action that Intel wouldn't need to take if Tiger Lake was ready for mass production volumes.

While Tiger Lake will offer Intel a considerable performance increase over Ice Lake, Intel's 10nm manufacturing appears to still be a problem for the company. If it wasn't why hasn't Intel announced plans for 10nm desktop processors, and why are the majority of Intel's processors still relying on 14nm lithography? 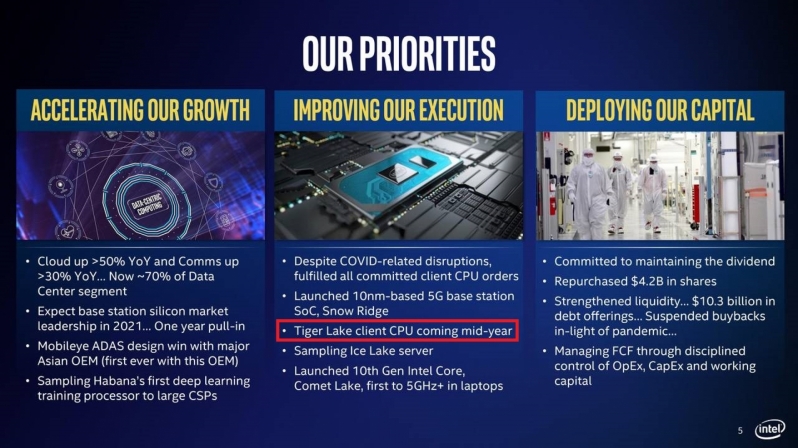 While Intel's Tiger Lake plans appear as a positive move for the company, it remains to be seen how successful Tiger Lake will be in practice. Ice Lake is available within relatively few notebooks, and Intel needs to prove that this will change with Tiger Lake.

Tiger Lake is shaping up to be a great product for Intel, but will it be available in high enough volumes to meet the demands on the notebook market?

You can join the discussion on Intel's plans to release Tiger Lake this summer on the OC3D Forums.

WYP
Quote:
Tiger Lake will be exclusive to mobile, just like Ice Lake. Intel has made the 10th generation using both 10nm and 14nm processors. Most of these processors are 14nm.

If its Ice Lake or Tiger Lake, it's 10nm and will feature Intel's new Gen11 or XE integrated graphics.

Warchild
Quote:
Thanks for clearing it up. Now im on the same page.. or a few behind at least.


Sry Intel. As much as I hate to say this...AMD has whooped your butt and it appears that it will continue to do so with little to no effort.Quote

Hopefully they can squeeze 6 & 8 cores into Tiger-Lake, otherwise what would be the point?Quote
Reply