More cores, a higher TDP and a new socket

Intel needs to respond to Zen 2. AMD's Ryzen 3rd Generation processors cannot go ignored forever. On their mainstream CPU sockets, AMD offers up to 12 cores (with 16-core models being due to release soon) and Intel offers eight cores. Beyond this, AMD offers better value for money in a wide range of workloads, placing Intel in an uncomfortable position.

According to leaked slides from xfastest, Intel's response will come in the form of their desktop-grade Comet Lake-S series of processors. These CPUs will ship with new 400-series motherboards and a new LGA 1200 socket. Comet Lake-S will allegedly ship with up to 10 cores and with TDPs as high as 125W.

Comet Lake's desktop offerings are due to release in early 2020. In the near term, Intel's all-core 5GHz i9-9900KS will act as Intel's response to Ryzen 3rd Gen. Comet Lake will also use Intel's 14nm manufacturing process, with 10nm being reserved for future desktop products. Comet Lake-S will also continue to use Skylake-style CPU cores, giving Comet Lake similar performance to Coffee Lake at the same clock speeds. 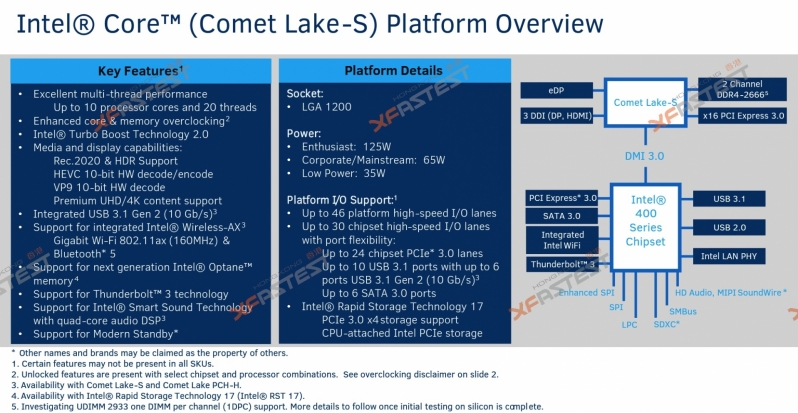 With 10 cores and 20 threads, Comet Lake is due to offer a 25% performance boost over Coffee Lake's highest-end i9-9900K model at the same clock speeds. However, it remains to be seen how well Comet Lake will clock. Extra cores will require more power, and this increased power consumption may result in lower average CPU clock speeds. Even so, users of these processors will likely be able to overclock to around 5GHz with sufficient cooling, just like Intel's last-generation Coffee Lake K-series processors.

Regardless, Intel is responding to 12-core and 16-core AMD processors with 10-cores and a new socket. If this is true, Intel will be seen negatively by a large number of enthusiasts. AMD's upgrade to Zen 2 required a BIOS update, whereas upgrading to Comel Lake will require both a new CPU and a new motherboard. 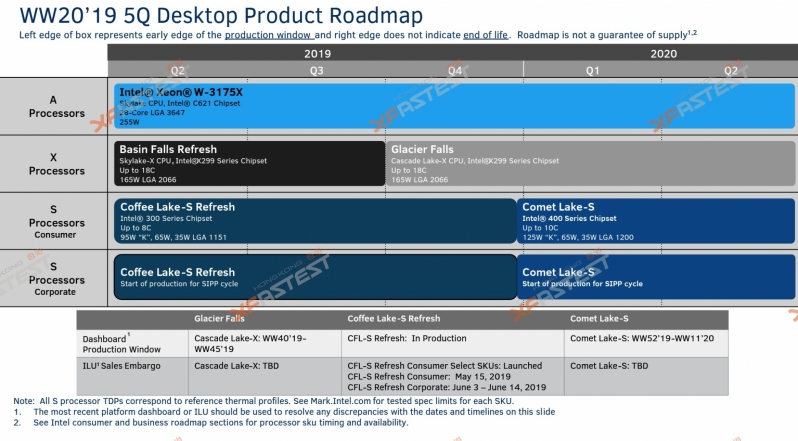 At this time it is unknown when Intel plans to move to 10nm in the desktop CPU market.

You can join the discussion on Intel's desktop-grade Comet Lake processors on the OC3D Forums.

RobM
It is comical how they keep banging this out, and on yet another socket whilst the competition give us real improvements on all levels with the same socket.Quote

NeverBackDown
Well I find it funny that Intel still has better single thread performance at 14nm vs 7nm. Sure they lose multi threads but for gamers Intel is still king...

Once they get to 10nm AMD are probably screwed on both fronts tbh.

tgrech
With this area between 14nm and EUV nodes each node improvement will inherently make a given clock speed harder to achieve, AMD have had to use a sea of power gating just to stick around the same ballpark to a low-power, low-clock optimised 14nm node with TSMC 7nm. It's why Intel's Ice Lake 10nm parts can't break 4.1Ghz, even in TDP's/SKUs where their old 14nm parts are boosting to 5Ghz.

Until Intel has their 7nm EUV they're in a bit of a wasteland, hence why 10nm isn't and can't(With the fab allocation now left for it) go to anything we'd really consider mass production on Intel's scale of things and will almost certainly be skipped for performance desktop. They'll probably need to use 7nm+ or ++ to get an arch as wide and large as Ice Lake(Or derivatives) to clock speeds or core counts that are even within 15% of Coffee Lake atm(Unless they are finally ready with at least one of their multi-chip-module technologies anyway), it looks like their first round of 7nm will all get tested out with GPUs.

(But even with all of this we're still only talking about AMD potentially fully catching up with the Skylake arch in single threaded performance with Zen3 in that time, potentially if Intel could clock an Ice Lake like arch to 5Ghz on 2022's 7nm+ they'd fly right past them again unless AMD has already committed to going much wider with upcoming archs)Quote

Dicehunter
Intel don't seem to have the mental capability to learn, AMD are offering backwards compatibility as far back as their 1st gen Ryzen chipset for Ryzen 3000, That is a HUGE selling point and a reason, With the amazing performance, Why AMD are rapidly gaining market share.Quote
Reply