Over the next month, there will be a lot of people arguing over who offers the best high-end desktop (HEDT) CPU, whether the crown sits on Intel's X299 platform or AMD's Ryzen Threadripper platform.
Intel has recently revealed their 14-18 core i9 series of Skylake-X CPUs, with Intel reporting that their upcoming 16-core i9 7960X will be able to achieve Cinebench scores of 3200. While this is a very impressive score when compared to Intel's older product, even outperforming 24-core last generation Xeon CPUs, it does not offer what anyone would call great value for money, especially when you add Threadripper into the mix.
AMD has already shown that their Ryzen Threadripper 10 core 1950X is capable of achieving scores of around 3050, which is huge considering the fact that AMD's 1950X is $700 cheaper and offers the same core count.
Both Intel X299 and AMD X399 have their own advantages, with Skylake-X offering higher potential clock speeds than Ryzen, particularly when overclocking, but with a huge price increase that comes alongside it. Certain workloads will favour each platform, especially when comparing products with equivalent pricing. This will make this generation one of the most interesting that we have seen for CPUs in quite some time, with both Intel and AMD offering highly competitive products when compared to last generation counterparts. 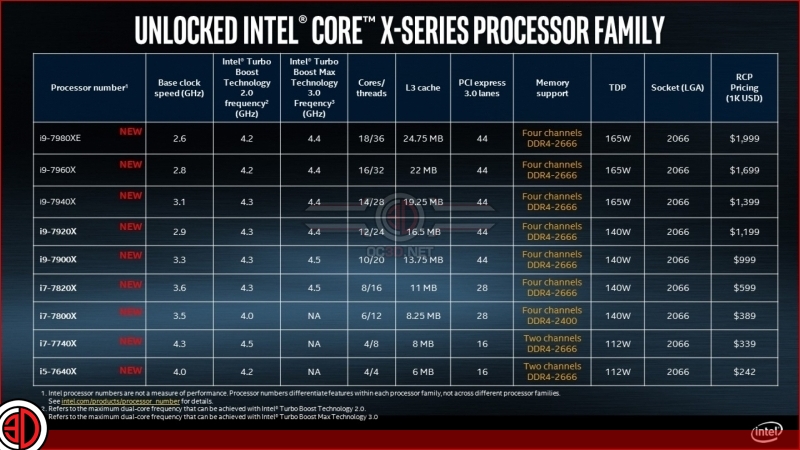 Reviews for AMD's Threadripper platform will release later this week, so PC enthusiasts will soon be able to see for themselves what AMD's high-end CPU lineup has to offer. Will AMD's lower-cost offerings be able to out-compete Intel's high-end desktop lineup?

Intel has announced that their 12-core i9 7920X will be available on August 28th, with their higher-end 14-18 core Skylake-X models becoming available to purchase from September 25th.

You can join the discussion on Intel's Core i9 7960X on the OC3D Forums.

AlienALX
Not a bad score, but a bad price for the score. TRs in Alienwares have been hitting over 3000 on the 16 core and it costs $700 less. I really don't think I could bring myself to pay $700 for 8%. And that's without any clocking to the TR, because Alienware are known for having crappy overclocking. I did OK with my 5820k, but it all had to be done through Windows and the clock needed to be loaded every time you booted the rig. PITA.Quote

Gothmoth
waiting for the thermals of the 16 core threadripper.

yes you may can overclock the intels better... but i don´t want such ridicolous temps as we have seen with the 10 core intels.Quote

I think they're gonna need a bigger boat...Quote