If there's one thing that we like at OC3D, it's smart engineering. Small design tweaks can make the difference between a great product, and a product that's difficult to use or has a glaring shortcoming.

Many things can govern the efficiency of heat transfers, be it the size of your cooling solution, the power requirements of your processor and the materials that sit between your heat source and your heat sink. Intel hopes to make Comet Lake cooler by changing the area between their CPU cores and the base of your chosen cooling solution.

On top of a processor sits an area of inactive silicon, and silicon is a terrible heat conductor, at least when compared to copper. With Comet Lake, Intel has thinned this later of inactive copper to create a "thin die", and has increased the thickness of Comet Lake's IHS to compensate for this change. Intel has also confirmed to us that it has increased the percentage of copper in Comet Lake's Integrated Heatspreader (IHS) to improve its thermal conductivity.

What Intel has done is allow heat to transfer more from their Comet Lake CPU cores to the CPU coolers of their users, allowing heat to move away from their CPU cores faster. This will help lower Comet Lake's thermals, even without an upgrade to your CPU cooling solution. That said, it remains to be seen whether or not these design tweaks are enough to keep Comet Lake cool under load, especially their i9-10900K.

With Comet Lake, Intel has effectively lapped the CPU dies of their latest processors in an effort to improve their thermals, a process which is popular amongst high-end overclockers. Like Coffee Lake-R, Intel's Comet Lake-S processors will continue to use STIM, a Soldered Thermal Interface Material. 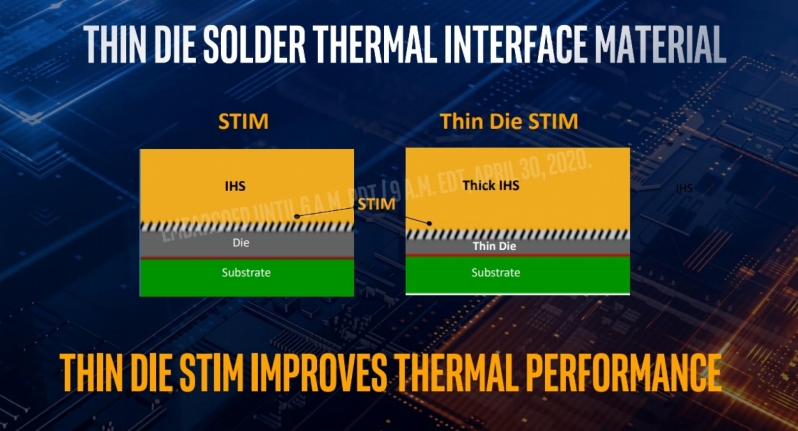 The big question that surrounds Comet Lake is this. Will Intel's i9-10900K be easy to cool? Will the i9-10900K run too hot for many users, or will Intel's design tweaks be enough to have a significant impact on thermal performance. I guess we will find out when reviews land for Intel's i9-10900K.

You can join the discussion on Comet Lake's thermally focused design changes on the OC3D Forums.

g0ggles1994
Believe it when I see it, I'd suspect it would make heat worse since it compacts the heat source into a smaller areaQuote

Why didn't they do this years ago? like, when they were using paste because and I quote "We have no choice we can not solder the dies they are too small and prone to cracking" but soon figured it out when AMD released Ryzen?

Funny part is that most who would buy this would also delid. So they have removed that, better come up with some crap to get those people back.

Not as high as I thought. Huge slap in the face for 9900k owners though, though at least the prices are heading in the right direction.Quote

WYP
Quote:
How is that a "slap in the face for 9900k owners". That CPU released in 2018. By that logic, every new processor is a slap in the face to anyone that bought the previous generation.Quote