Intel's preparing to release their next-generation of high-end desktop (HEDT) processors next month in the form of Cascade Lake-X. With this release, Intel is hoping to inject some new life into their X299 platform by offering more value for money than ever before.

With Cascade Lake-X, Intel plans to offer PC builders between 74% and 109% more performance-per-dollar than their last-generation offerings. While Intel has not stated how they plan to achieve this, our guess is that it will be with clock speed bumps and higher core counts at every price point.

The slide below details Intel's plans, basically admitting that AMD's existing Threadripper offerings offer more value for money than their current-generation Skylake-X series CPUs. Even so, Intel's upcoming Cascade Lake-X series is due to revolutionise the pricing structure of the HEDT market, which is great news for consumers.

Regardless, we already know that AMD has plans to release 3rd Generation Threadripper processors in the coming quarters. This leaves us to suspect that Intel's offer of increased value comes as a pre-emptive response to AMD's upcoming Zen 2 Threadripper CPUs. Below is what Intel has to say about Cascade Lake-X.

Intel has dramatic changes coming next month for the X-series and HEDT (high-end desktop market) line as well. The new family of products code-named Cascade Lake-X will offer up to 2x the performance per dollar of the previous generation. Though it is too early to talk about the specifics of how we are accomplishing this, you will see soon enough our commitment to the X-series and W-series families across Intel. 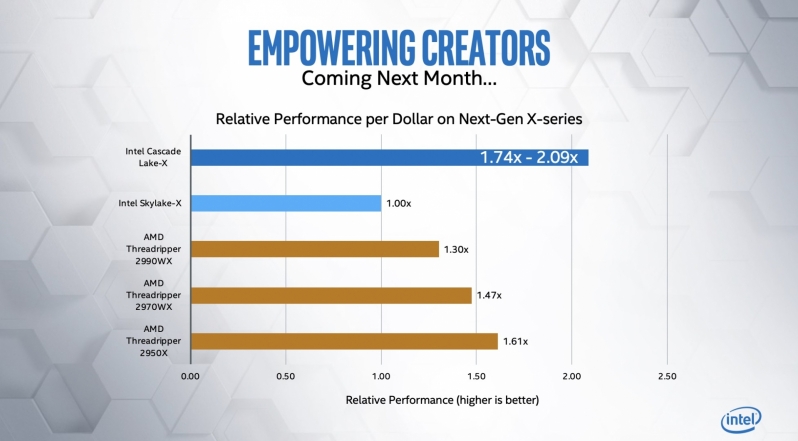 You can join the discussion on Intel's Cascade Lake-X series of CPUs on the OC3D Forums.

smilertoo
Unless the new Intel has amazing performance my next buy will be AMD; Intel sat on their hands milking customers for too long and AMD deserve sales for not holding back.Quote

hdimitrov
Soo first of: "between 74% and 209% more performance-per-dollar" I think you mean between 74% and 109% more.
Second: Good for Intel to boost their ego by beating last-gen AMD. I'm sure Threadripper 3 will be on-par with this if not even faster.Quote

demonking
So have Intel and AMD traded places with there over exaggerated claims? I'd guess that this will be on a specific work load and will not take into account both next gen tr and the guaranteed requirement to need a new socket.
Trying to do the maths on this basing it on the current 2990wx is £1500 but struggling whilst I'm at work but it looks as if it's going to have to clocked significantly higher, priced a lot lower or contain a hell of a lot of cores if not all to reach those claimsQuote

WYP
Quote:
Intel has been speaking a lot about "real world" performance. Ultimately it depends on what they test. Threadripper can fall short in a lot of applications due to its multi-die nature. That said, Threadripper beats Skylake-X in Intel's numbers, so it must be a mix of factors.

AMD plans to release the Ryzen 3rd Gen 3950X soon, so that is the new 16-core that Intel needs to compete with. It is only a matter of time before Threadripper is replaced.

Between Ryzen 3rd Gen and next-gen Threadripper Intel needs to decrease their pricing of X299 hardware. This way, Intel has spoken about their price cuts early so that it is seen positively. They don't want this to be seen as "we are reacting to AMD".Quote
Reply