Will this apply to all 9th Gen CPUs, or just the 8-core models?

Intel's upcoming 9000 series processors are rumoured to be launched this October, offering users Coffee Lake with higher clock speeds, core counts and a new i9 series model called the i9-9900K.

Rumours have been running wild for these processors for quite some time, especially when it comes to their TDPs, clock speeds and whether or not Intel soldered their IHS (Integrated Heat Spreader) or stuck to their standard thermal compound.

Videocardz has now been provided "confidential" Intel slides from anonymous sources, revealing the same clock speeds, core counts and model names as previous leaks. What is new here is that Intel i9-9900K, i7-9700K and i5-9600K will all ship with 95W TDPs, showing no increase in TDP for Intel's new 8-core processor, that some models will use "NEW SolderThermal Interface Material (STIM)."

The report claims that Intel will reveal the pricing of the new series in September and has plans to ship these new CPUs in October. No non-K 9000 series CPUs will be released until Q1 2019, making this an overclocking-only launch. 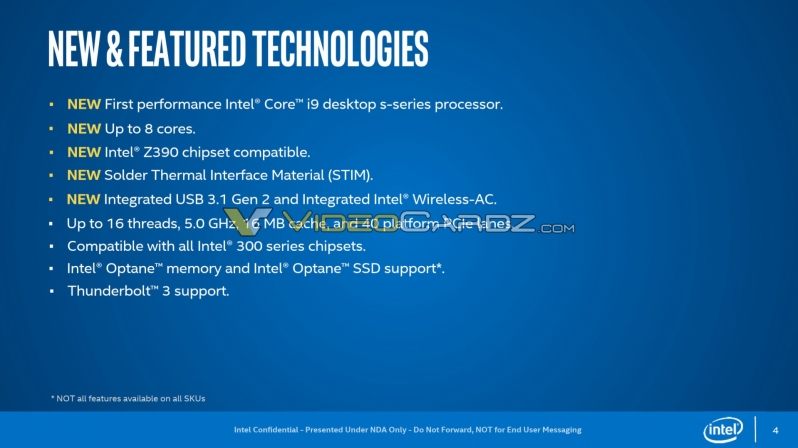 The report also claims that Intel will offer their users a new "Extreme Tuning Utility" for advanced overclocking, though at this time it remains unclear what this software will do. Right now, it appears to be an alternative to AMD's Ryzen Master utility for Intel processors. 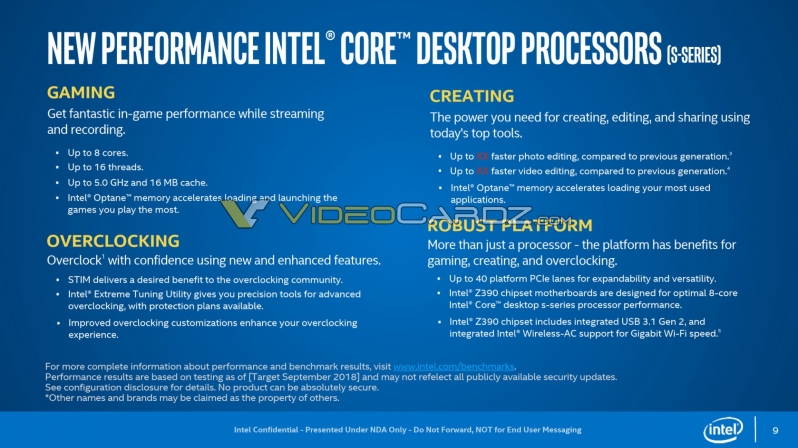 You can join the discussion on Intel's 9000 series processors being soldered on the OC3D Forums.

In all seriousness we should have solder on every cpu. Just another way to make people spend more money i guess.Quote

AlienALX
STIM? Feck is this? Fallout 4?

Lol how can you give it a posh name?Quote

AlienALX
Only Intel could pull that BS after being caught lying for years. It shows just how totally out of touch they are.Quote

Dawelio
Quote:
Yup, only now soldering their CPUs, when AMD were the clever ones and did all of their Ryzen ones from the beginning.
Just now Intel actually jumps on that train, years after ruling the industry. And after AMD clearing the floor under their feet and showing them the (proper) way it's done.Quote

Bartacus
Quote:
Intel WAS soldering CPUs back in the day, on the last decent Intel platform they released before deciding to sodomize the enthusiast, the X79 chipset (socket 2011). My i7 3820 was soldered, and even OCed mildly to 4.3ghz, it doesn't see 60C under load (close, 57-59). Then Intel released the PCIE crippled X99 chipset (for lower end CPUs anyway), and the decline started there.Quote
Reply