No mention of a 8-core Coffee Lake series CPU

At Galax's GEC/GOC 2017 Overclocking and esports Carnival in Bangkok, Intel has reportedly showcased a 2018 roadmap which showcases some important dates for upcoming Coffee Lake series CPUs and their Cascade Lake-X series of products, which is set to succeed Skylake-X.

This roadmap, as can be seen below, states that Skylake-X and Kaby Lake-X will both be replaced by Cascade Lake-X in Q4 2018, though at this time no other information is available about this new CPU architecture. Rumour has it that this release will be based on Intel's 14nm++ manufacturing process and act as a Kaby Lake-like refresh for Skylake-X on the company's X299 platform, no concrete information on Cascade Lake-X is currently available.

Intel's consumer desktop platform is also set to see more Coffee Lake series CPUs in Q1 2018, with the release of new models which range from dual cores to hex-cores, which will release alongside new 300-series chipsets, likely B36, H3700 and H310. Curiously, this new roadmap contains no information about previously rumoured 8-core Coffee Lake CPUs, suggesting that Intel has no plans to release such a large CPU on their consumer desktop platform.

The roadmap states that new Coffee Lake-S CPUs will enter production in the fifth week of 2018, with new 300-series chipsets beginning production on the 7th week of 2018. These new products are expected to hit retail in March/April and April/May of 2018 respectively. 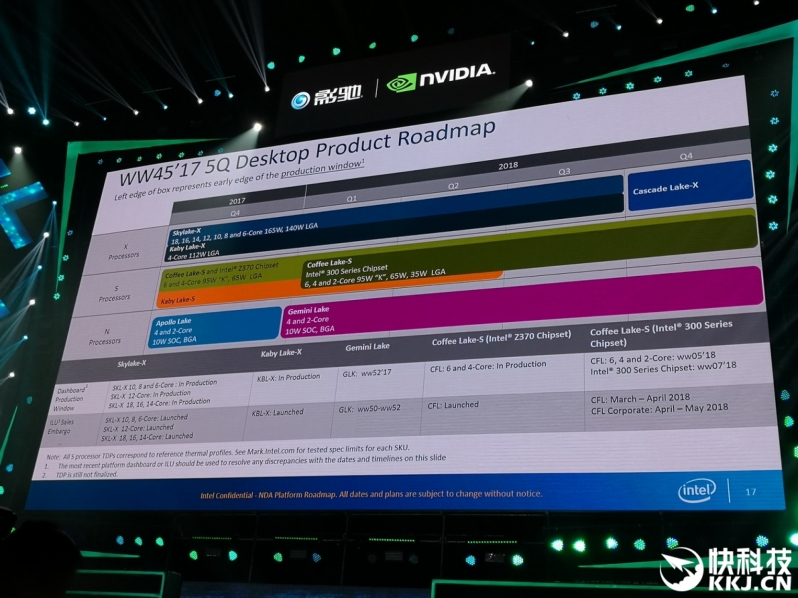 Like all product roadmaps, the information available here is subject to change, though the data available here does indicate that the remainder of Intel's Coffee Lake lineup will not release until late Q1 or early Q2, which is later than expected. It also shows that Intel has no plans to replace Coffee Lake in 2018, which means that 10nm CPUs are unlikely to reach desktop platforms until 2019.

You can join the discussion on Intel's 2018 roadmap on the OC3D Forums.

except when they have to rush it i guess....

but i think this is not the complete roadmap.Quote
Reply