Intel is rumoured to release their 6-core "Coffee Lake" CPU in Q2 2018 for their mainstream desktop range on their existing 14nm process. This new processor should come after Intel's upcoming Kaby Lake processors and will arrive shortly after their 10nm Cannon Lake silicon, which are designed to offer low power draw for small form factor and mobile computing applications.

The most noteworthy thing about Coffee late is that this is the first time that Intel has increased the CPU core count on their mainstream sockets since their Core 2 Extreme, marking a big change for the company if these leaks are true. 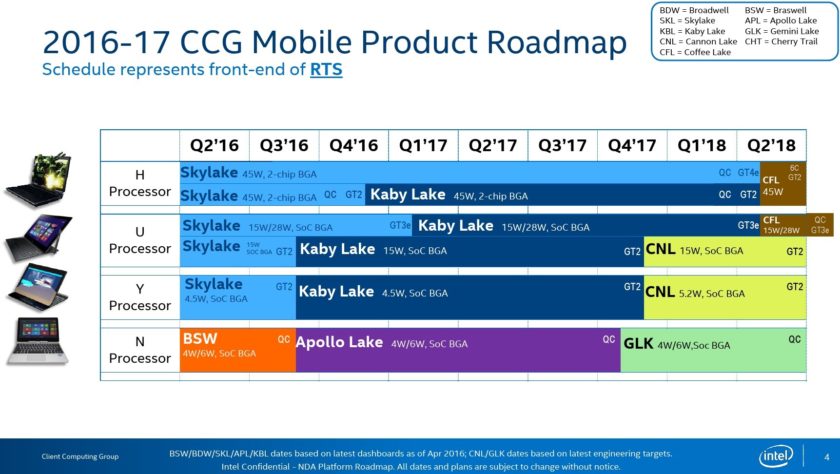 If the above table is correct Intel's 6-core "coffee lake" CPUs will release in 2018 in 2-core, quad-core and hex-core variants and will use Intel's GT3e graphics.

Right now it looks like Intel will be creating Coffee lake on a more advanced version of their 14nm manufacturing node rather than 10nm, hinting that Intel may be having issues creating larger, more powerful CPUs on their upcoming 10nm manufacturing process.

You can join the discussion on Intel's rumoured Coffee Lake CPUs on the OC3D Forums.

Dicehunter
I wonder if more than 4+ core CPU's became the norm years ago would we have more applications and games out that take advantage of it ?

Just a theory but seems to me like Intel may be setting the trend for games and applications taking advantage of more than 4 cores.Quote

WYP
Quote:
Right now I am seeing most games make good use of the 8 threads on my i7.

The only major exception was Dark Souls 3 that was single core limited. (as in one core was maxed out and most other cores did nothing)Quote

dwatterworth
This should read 'Intel knocks the 6800K down a peg or two' haha.
I assume under their current pricing model (add cores and add price, no 'added value') the quad core HT i7 will maintain the ~$350 point and just create a new bracket in the $425-$475 mark.Quote

SpencerUk
So the mainstream catches up to my 5820K haha.