2017 has been a very interesting year for the datacenter, with the recent launch of AMD's new Naples server chips and yesterday's launch of Skylake SP on their LGA 3647 socket.
This is the first year where the datacenter market has had any real competition for almost a decade, with Intel's market dominance being challenged by AMD's new Zen architecture.
Intel is not taking this competition sitting down, with Skylake SP being Intel's most competitive and powerful datacenter line of CPUs to date, though that has not stopped the company from taking a dig at AMD whenever they can.
Looking through Intel's slide deck, it becomes apparent that Intel is taking every opportunity to badmouth AMD's new Naples architecture wherever they can, rather than taking the time to explain the true advantages that their new architecture offers. 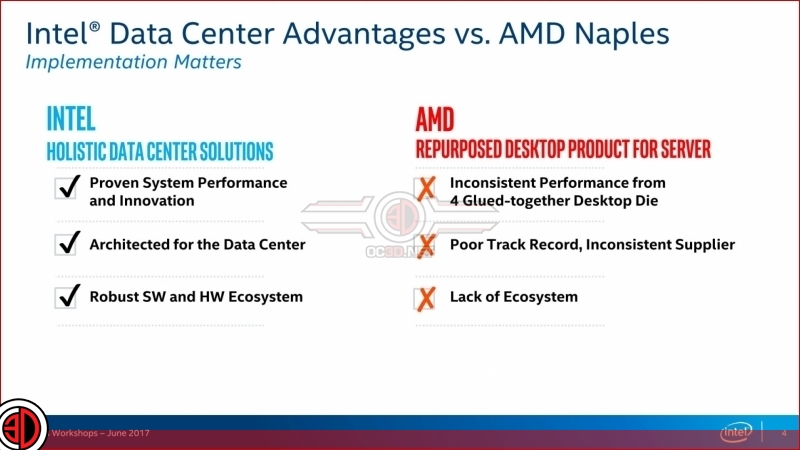 Yes, inter-die interconnects will cause higher core-core latencies when communicating between CPU dies, but Intel has admitted that they have not been able to test AMD's Naples CPUs for themselves. This means that Intel has no ways of quantifying these latencies and has no data to prove their "inconsistent performance" claims.

Intel did say that their comparable Skylake SP Xeon CPUs were able to outperform AMD's Naples CPUs, though it is hard to tell whether or not they are comparing price competitive solutions or CPUs with similar core counts.

While AMD's Naples desktop CPUs are comprised of several dies, it is disingenuous to call them desktop dies, as Naples does offer features that Ryzen lacks. Yes, these Zen dies were first used with Ryzen on the desktop, but they were designed from the start for both markets. This design allows AMD to focus on providing better silicon/die yields and delivering better value for money, though there are some performance disadvantages. 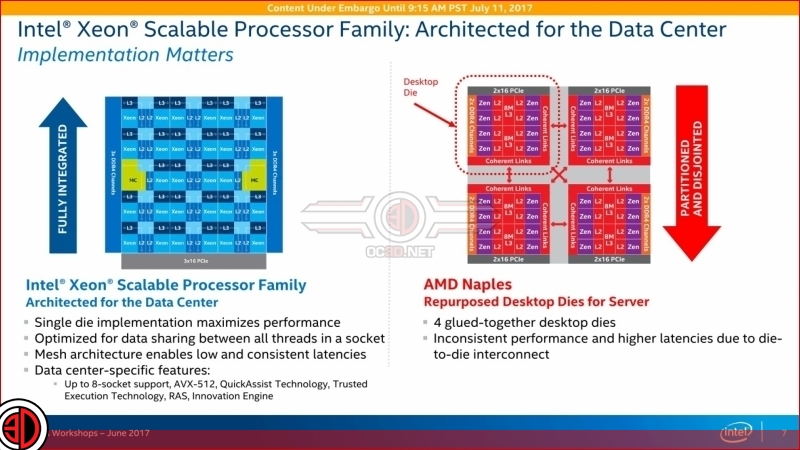 Intel also throws AMD under the bus by highlighting their server dominance over the past decade, while also applying the need for Ryzen-specific gaming optimisations in gaming software to the enterprise datacenter market. To say the least, this is an "apples to oranges" comparison, as gaming and datacenter software workloads are incomparably different.
While it is true that AMD's Naples CPU lineup will benefit from specific software optimisations, so does any Intel CPU. Yes, developers know a lot more about Intel products right now, but that does not mean that AMD's designs will not offer better value in certain applications.
Instead of focusing on unique Intel features like AVX-512 support and up to 8-socket configurations, Intel instead took the time to focus on untested claims about "inconsistent performance" on AMD Naples. 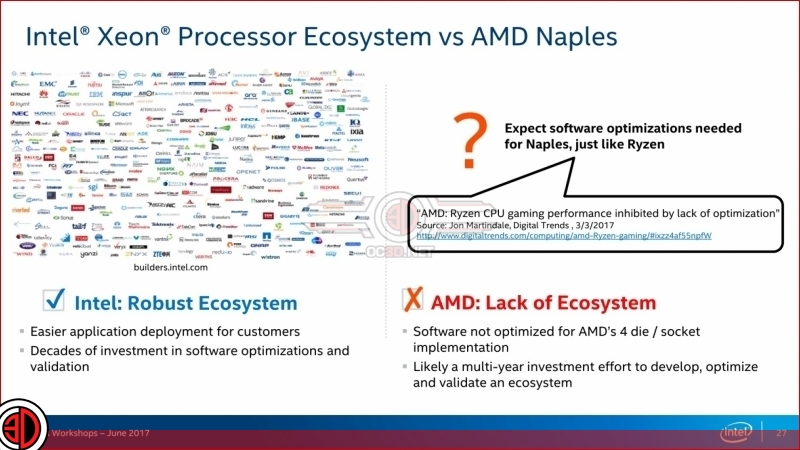 In the below slide Intel decided to focus on a comparison between a $2200 Intel Xeon 6134 CPU and an underclocked $499 Ryzen 7 1800X, which offers core and clock speed parity but highlights the price/performance ratio that is offered by AMD hardware.

Note here that no real performance results are shown, just the performance chances of activating SMT (Simultaneous Multi-threading), with two of the results below being listed as estimates. Beyond that 3rd parties have already praised AMD's SMT implementation, on both Ryzen and Naples.

Elsewhere Intel also quotes a Wccftech article from January which stated that "AMD('s) Zen Architecture For Ryzen and Naples Processors Will Last Four Years", implying that AMD did not have long-term future plans for the datacenter. To say the least, this quote is preposterous, as this was before Ryzen's launch when the rumour mill was going wild and

To say the least, this quote is preposterous, as this was before Ryzen's launch when the rumour mill was going wild and from an article that states that AMD has plans of a "tock, tock, tock" architecture changes for the next 4 years, not that they have no plans beyond that. 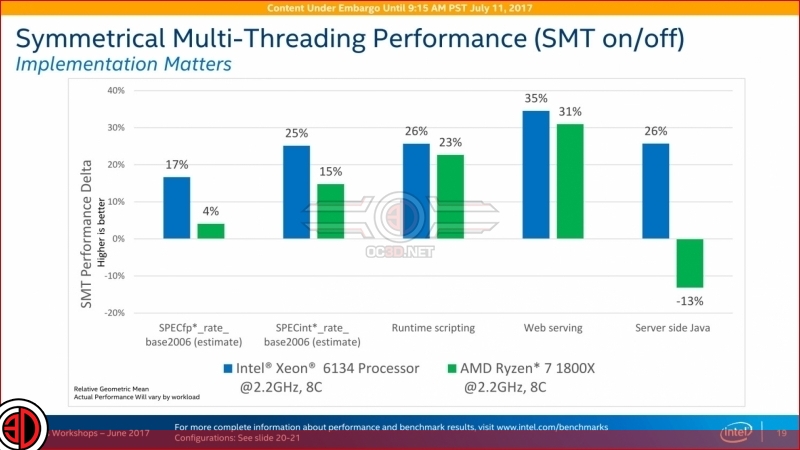 A lot of Intel's slides attempt to convey a single message, that AMD is unreliable, provided inconsistent performance, will require additional software optimisations and that AMD does not have long term plans for the datacenter.

To say the least, this sounds a lot like scare tactics from Intel, relying not on the merits of their own products but on dirty tactics to keep customers away from the competition. If Intel wants to talk about any "performance inconsistency" with Naples they will need to back this up with dedicated testing and not hearsay.

Right now Intel has a lot of reason to be worried in the datacenter, with many moving towards GPUs for compute (especially for AI calculations) and competition on the CPU-side from AMD for the first time in almost a decade. Intel certainly has a lot to lose here, as they are certainly not in the dominant position that they previously enjoyed and are in a place where they are likely to lose market share.

With Naples architecture focuses on value for money, offering a lot of features to single-socket server users while maximising CPU yields through their utilisation of small dies to create large CPU products. Most servers utilise single or dual socket setups, giving AMD a huge opportunity to make some gains here.

On the other hand, Intel will remain dominant in the high-end of the datacenter market, being the only provider to offer support for four and eight socket CPU setups, though this is only a small portion of the market. Intel is also the only company to offer support for AVX-512 workloads, which is another factor that will give Intel an advantage in certain markets.

You can join the discussion on Intel's "dirty marketing" against AMD Naples on the OC3D Forums.

Bartacus
Tit for tat. AMD's marketing idiots have taken tons of shots at Nvidia while falling flat on their faces with Vega, so good for Intel. AMD deserves it. Every company does crap like this.Quote

Chopper3
They are at least partially right - AMD does categorically have a "poor track record" in the server space and it will take more than one generation of their EPYC product line to make a dent into most server-buyer's expectations of them. I've been buying servers for over a quarter of century and have nothing but bad experiences with AMD across that time and this tallies with everyone I know who's even tried them - we still have very bad tastes in our mouths over AMD and this will not change any time soon.

I dare say that EPYC will have some benefits over Purley - I'm sure there are people out there who have been testing them both for months *ahem* - value being the key standout for AMD - but they do have a poor record and while I'm not confirming or denying 'inconsistent performance' let me say that I understand that statement.

Either way at least AMD will eventually force Intel to be more competitive - and ideally not confuse their larger customers with 58 different SKUs!Quote

Warchild
Quote:
AMD marketting shots at Nvidia made me laugh too.