Sorry Z370 users, but Intel has locked this feature onto its Z390 platform.

While some enthusiasts find the process of manual overclocking enjoyable, it is understandable why many end-users want an easier way to overclock. Some will not have enough time to do the stress testing that's required, while others will lack the confidence needed for bios-diving and in-depth setting adjustment, but nonetheless want to enjoy the benefits of overclocking. For these people, Intel has released their "Intel Performance Maximiser" overclocking tool.

With this function, Intel is playing catch-up, offering a solution which is somewhat competitive with AMD's Ryzen Master utility and Precision Boost Overdrive technology. More accurately, this tool can be seen as a competitor to Nvidia's OC Scanner, offering users the overclock and stress test their hardware. In short, Intel is playing catch-up, with the incoming launch of Ryzen 3rd Generation no doubt prompting this move.

In their Computex demo, Intel managed to get an i7-9700K processor to move from its all-core boost clocks of 4.6GHz to 5.2GHz, providing a considerable boost to system performance. Intel's performance Maximizer tool will also adjust this overclock over time to keep getting the most out of systems, which eventually will include lower overclocks if your processors potential degrades.

PCPER was given early access to Intel's Performance Maximiser and found that the company's tool was unable to match their manual overclocking efforts. Another factor to consider is that the tool didn't automatically set memory clock speeds, leaving their system at a stock setting of 2133MHz. They also found that they were able to achieve the same overclocks as Intel at a lower voltage and maintain system stability, giving manual overclocking a huge win on both the power and performance side of the spectrum. 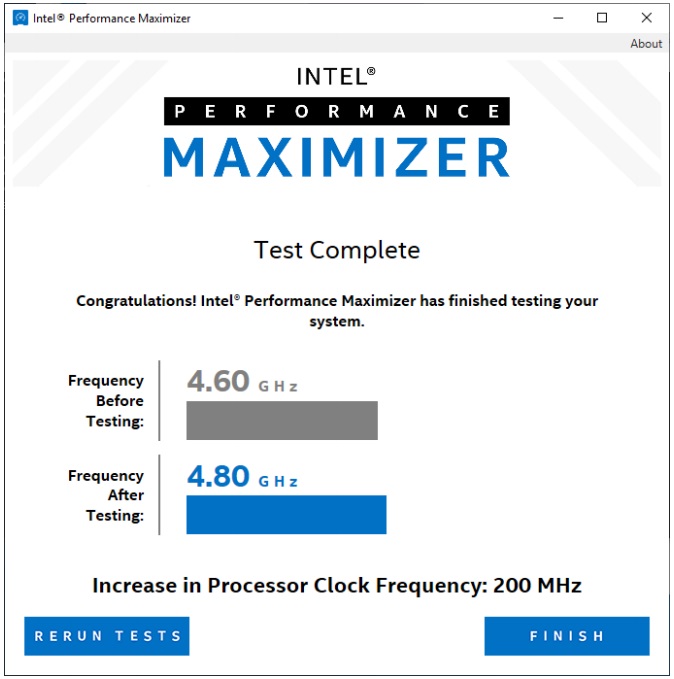 So who is this tool for? Most K-series CPU owners purchase their CPUs with overclocking in mind, but if you are one of the few PC builders who have kept their 9th Generation K-series processors at stock settings, now is the easiest time to overclock your Intel-based system.

You can join the discussion on Intel's "Performance Maximiser" overclocking tool on the OC3D Forums.

KingNosser
This sounds pointless since overclocking is pretty darn easy on Intel but not even setting the memory to the correct speeds this tool has a long way to go.Quote

FTLN
Intel shoving one right in the backend to Z370 i9 owners like me ! !

You heard it here first:

FTLN
@TTL i really hope you kick off about this ! !Quote

Peace Đ
I would've needed this around 5 years ago

But yes, if it doesn't set RAM speeds, then it could need a little update.Quote
Reply