Intel's 'velocity' in increasing on 10nm

Intel's long-awaited 10nm process has been the but of many jokes over the years, facing delay after delay as Intel's teams struggled in their way against physics to make their transistors smaller than ever before.

Unfortunately for Intel, these delays have allowed their competitors to catch up, with TSMC having already created products using their similarly sized 7nm node, allowing Intel's rivals to surpass them in terms of lithography technology, threatening Intel's position as top dog of the PC industry.

In their Q1 2019 earnings call, Intel has confirmed that progress has been made on 10nm; and that the company has seen an almost 2x increase in the rate at which 10nm chips move through their factories, leaving the company optimistic about a late 2019 launch for 10nm products. Intel plans to release volume client systems in "holiday 2019", and thanks to their manufacturing improvements they expect to ship in larger volumes than previously estimated.

Below is a comment from Intel's CEO, Bob Swan regarding their progress on 10nm;

On the (10 nm) process technology front, our teams executed well in Q1 and our velocity is increasing.

We remain on track to have volume client systems on shelves for the holiday selling season. And over the past four months, the organization drove a nearly 2X improvement in the rate at which 10nm products move through our factories. 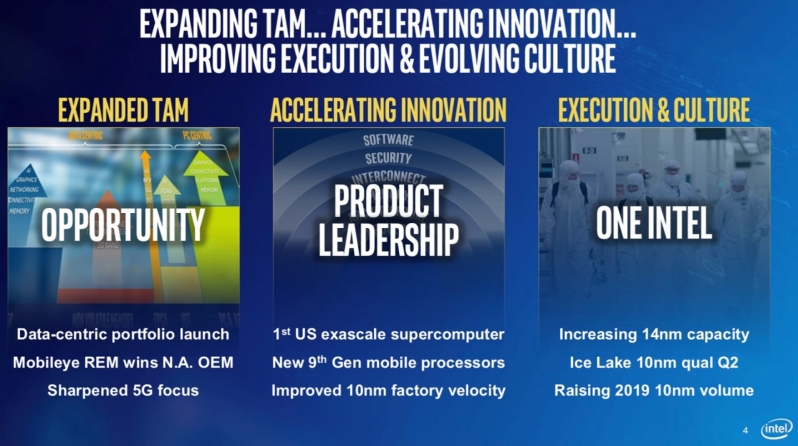 When asked about future 10nm products, Swan also stated that 10nm would be brought to server-grade processors faster than previous generation nodes, highlighting plans to release 10nm server processors sometime in 2020. This means that we should expect 10nm server chips to release before Q4 2020, which is earlier than some recently leaked roadmaps have suggested. Intel has not commented on 10nm desktop processors.

AMD plans to release 7nm desktop and server processors within the next few months, giving them a clear lead over Intel when it comes to lithography technology. Intel's initial 10nm processors will be pushed into the mobile market, a segment of the PC ecosystem which AMD's 7nm products are unlikely to reach before 2020.

You can join the discussion on Intel's 10nm progress on the OC3D Forums.