While Intel never admitted this publically, they were worried about AMD's Ryzen series CPUs, which challenged the companies market dominance and brought competition back into the desktop CPU market.
Intel needed to switch up their market strategy, especially as AMD's upcoming Ryzen-based 16-core Threadripper CPUs came to light, requiring Intel to totally rethink how they approached the high-end Desktop market.
This has resulted in Intel's new Skylake-X series of CPUs, which offers both increased clock speeds when compared to Broadwell-E and reduced pricing, making X299 a highly competitive desktop platform by comparison. Intel has also introduced new i9 series CPUs, which now offer increased thread counts to offer users up to 18 cores and 36 threads, which is almost 2x as high as Broadwell-E's flagship 10-core 20-thread offerings.

Intel has also redesigned their Turbo Boost 3.0 technology, which now allows Intel's 8-core+ CPUs to boost their two best performing cores to increased clock speed turbos. previously this was restricted to a single core, but with Skylake-X two CPU cores can benefit from this boost. 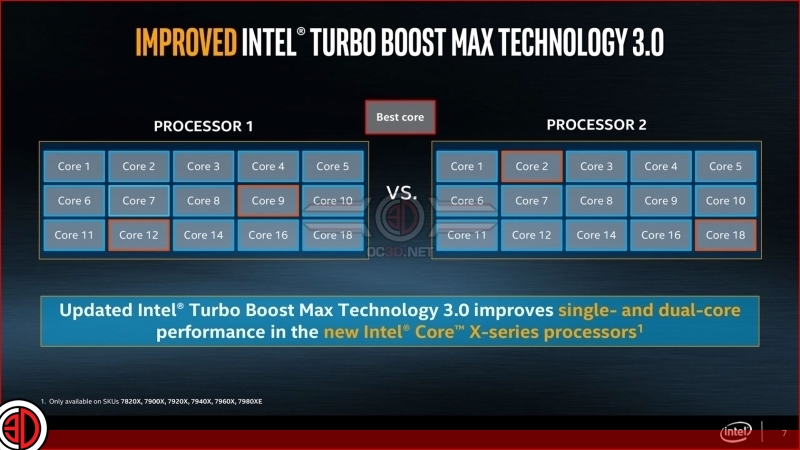 This will allow Intel's Skylake-X CPUs to boost all the way to 4.5GHz on the 7900X and 7820X, which is much higher than what any Broadwell-E CPU can achieve at stock.

Intel has also committed themselves to providing AVX-512 instruction support with Skylake-X, as well as continued support for per-core overclocking and an AVX overclocking offset. 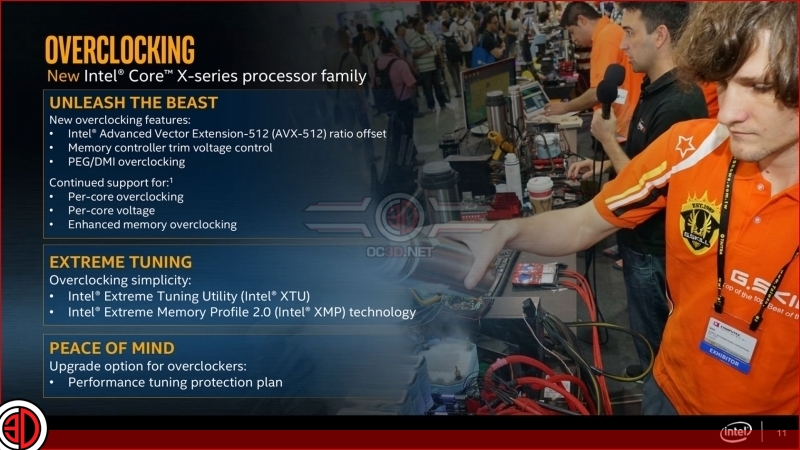 Skylake-X is easily Intel's best value high-end desktop platform in many generations, decreasing model pricing while also increasing clock speeds and core counts. Broadwell-E is simply terrible value by comparison, which makes it very exciting to be a consumer that is into high core/thread counts.

You can join the discussion on Intel's new Skylake-X and kaby Lake-X series of CPUs on the OC3D Forums.

It's nice to everyone to have this kind of competition.
But, at this time, I'm just afraid on the overall price of the plataform.

I reallyyyy doubt Intels 8/16 or 6/12cores will be near that overall price...
And ppl like me that already have nice ddr4, they "will" have to buy more sticks of the same memory for quad channel...

AlienALX
Quote:
But double the price of the 1700, which is every bit as good as the 1800x. They still want more money for a hex core than AMD want for an 8 core.

The prices only look good because of what Intel were charging before. But if I said "Here, this loaf of bread for £10" then a week later changed it to £5 that does not make it a cheap loaf of bread. It just shows I was taking the p155 before and thus am still taking the p155.

I gotta say I am also rather gutted that Intel held back for so long. Keeping us on quad core CPUs and drip feeding us 5%. It's just nuts.

Add to that the fact that these CPUs are not soldered? man alive they are going to have heat issues. It's bad enough on a 4c 8t, imagine how a 18 core CPU will be if it isn't soldered? I hope to god it is or it will just be throttle heaven.Quote

). The 7820X I am eyeing is $599 = 536 Euro = 640 Euro more likely. When will Tom gets his hands on them? I am eager to see if they (retail) indeed are not soldered...that would be bad...and controversial... Is that something they can change at will during production?Quote
Reply