Systems are expected this holiday season

While Intel's product launch is today, the company has confirmed that system availability isn't expected from PC manufacturers until 2019's Holiday Season, making this a paper launch. Some OEMs may ship 10nm systems early, but not in large quantities.

These new processors all make use of Intel's 10nm manufacturing process, the company's Gen11 graphics (which support VESA Adaptive Sync) and the company's next-generation Sunny Cove core architecture. These processors are code-named Ice Lake. Intel has further confirmed that there will be "additional products in the 10th Gen Intel Core mobile processor family" which will target "increased productivity and performance scaling for demanding, multithreaded workloads". Intel has not stated whether or not these higher-end processors will utilise 10nm, only that they will feature "performance scaling for demanding, multithreaded workloads".

One of Intel's newest features with Ice Lake is support for Integrated Thunderbolt 3, WiFi 6 and support for AVX 512 and AI Inference instructions. This is a first for an Intel mobile platform.

These 10th Gen Intel Core processors shift the paradigm for what it means to deliver leadership in mobile PC platforms. With broad-scale AI for the first time on PCs, an all-new graphics architecture, best-in-class Wi-Fi 6 (Gig+) and Thunderbolt 3 – all integrated onto the SoC, thanks to Intel’s 10nm process technology and architecture design – we’re opening the door to an entirely new range of experiences and innovations for the laptop. 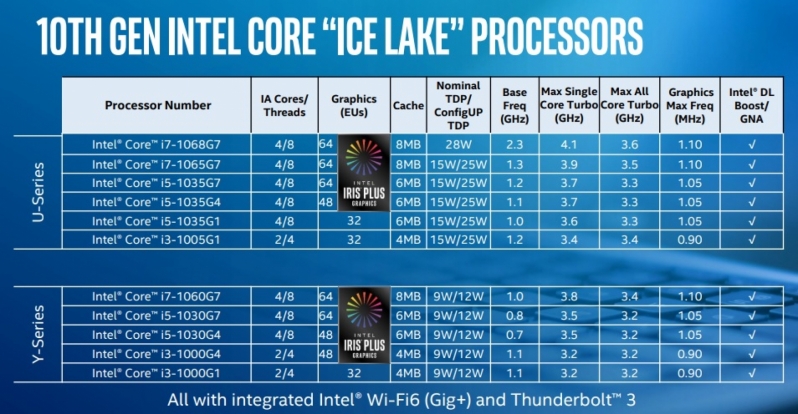 You can join the discussion on Intel's 10th Generation of 10nm Ice Lake processors on the OC3D Forums.