Can Intel compete while remaining on 14nm?

2020 promises to be a big year for high-performance notebooks, with Intel launching its Comet Lake-H series while AMD releases its Ryzen Mobile 4000 series. Both of these CPU generations deliver up to eight cores/sixteen threads and almost desktop-grade performance on the go, which is a big deal for mobile users.

With these products, AMD and Intel are primarily competing for the 45W TDP segment, with Intel continuing to rely on 14nm Skylake-based designs while AMD has pushed forward with Zen 2 CPU cores and 7nm lithography. At team Intel, the company's marketing are pitting their latest processors against high-end PCs from three years ago, whereas AMD is marketing their notebooks against Intel's current offerings.

Gaming is a focus for Intel's marketing this time, alongside high peak clock speed claims. For its comparisons, Intel is comparing its latest processors to a 3-year-old Intel notebook, hoping to target those who frequent upgrade to new mobile systems. The chart below highlights this marketing angle, though it is worth noting that these performance changes rely on both CPU and GPU hardware changes.

The slide below compares a PC with an i9-10980HK and an RTX 2080 Super with a system with an i7-7820HK with a GTX 1080. That's not a fair comparison, as it overstates Intel's CPU performance gains by a huge margin. If anything, Intel's taking credit for some of Nvidia's work here, though some of these games are known to be CPU-limited. This isn't an apples-to-apples comparison here.

Intel, if you want to highlight the changes in your CPU alone, use systems with Thunderbolt 3 and an external graphics card. This slide has opened you up to a lot of criticism. 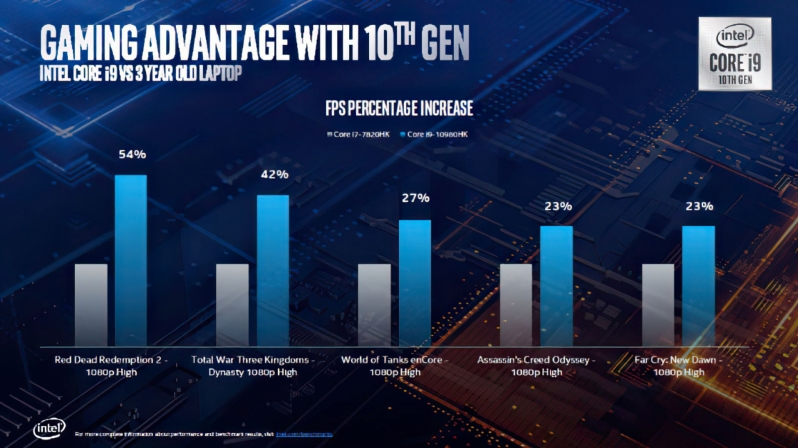 The major draw of these new processors is Intel's promise of higher clock speeds than the company's older 9th generation hardware. On the high-end, up to 5.3GHz processors are promised, but this comes with a few caveats.

The higher boost frequencies of these parts use a feature called Thermal Velocity Boost (TVB), a feature which must be supported by OEMs. Thermal Velocity Boost requires additional thermal headroom, which means that manufacturers will need to overbuild their systems to support this feature. This will net end users boost clock speeds which are 200MHz higher, at the cost of increased power draw and lower battery life. Even so, clock speeds of up to 5.3GHz on a laptop are incredibly impressive.

It looks like the real-world performance of these processors will vary widely depending on the power and cooling setups that OEM pair up with these 10th generation Intel processors. Intel is giving OEMs a lot of versatility here, which will allow them to develop some incredibly powerful systems. That said, performance increases come with a power and cooling cost, which will make high-performance Comet Lake-H series bulky and power-hungry.

Intel has claimed that they have over 30 designs planned for the "thin and lite" product category and over 100 models across consumer, commercial and workstation segments. 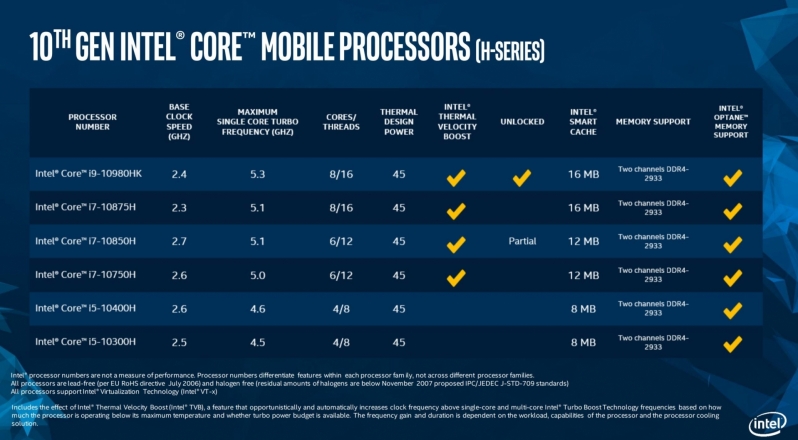 With this new generation of mobile processors, Intel wants to enable increased support for Thunderbolt 3 (though it isn't mandatory) and Integrated WiFi 6 support. RAM speeds have also been increased from 2666MHz to 2933MHz. 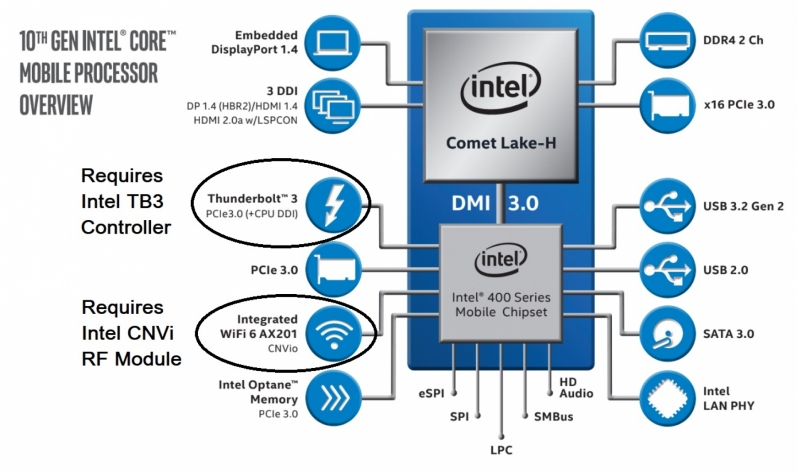 You can join the discussion on Intel's 10th Generation Comet Lake-H processors on the OC3D Forums.

Giggyolly
Unfortunately for AMD (& Consumers), the laptop industry is entirely OEM based. And pretty much all OEMs still have Intel's claws in them.
So it will take some time of Intel's CPUs being laughably behind AMD for them to start increasing the AMD offerings.Quote

g0ggles1994
As I said before, no chance those CPUs will hold over 5GHz for anything longer than a few seconds before they overheat and throttle. But morons will buy it up like wildfire because of itQuote

Avet
AMD will have hard time squeezing into this market. Actual performance is what matters. After being ripped by the community that none of the new Ryzen chips hits their advertised max boost targets AMD tweaked their CPUs to just spike at the start of the task and then return to standard 4-ish GHz. Did anyone care that 4.6 GHz max boos was just a gimmick so that software can report max advertised clock?? No, because the performance was really good.Quote

AlienALX
Quote:
That's exactly what happens. One core, until it hits 65c. Then it starts to throttle.

So it's literally marketing BS.Quote

meuvoy
Quote:
To be clear, it's really the consumer's fault. I don't think intel is paying for OEMs to stay with them besides what they already pay for higher-end offerings. (Really there's a reason why there isn't a gaming notebook with high end GPU and mid range CPU even though a core i5 would do just fine with an RTX 2080. But I digress), actually the problem here is consumer's are allienated with Intel's marketing they think anything other than i3, i5 or i7's are Chinese rip-offs. Seriously every single person in the last year that asked me for a laptop or desktop recommendation was skeptic and annoying every time I recommended a Ryzen powered laptop, even if it had more RAM and was less expensive with me guaranteeing them it would be a better choice, even if it was the same price.
People just think there isn't anything in the computing world besides Intel and that by itself will keep OEMs from moving over to AMDQuote
Reply