A 30% IPC boost over Goldmont Plus!

Intel has officially unveiled their next-generation Tremont CPU architecture, which promises to deliver low-power x86 performance for applications where performance per watt is the most critical factor.

Users of ultra-mobile systems need to know that they are getting the best performance from their limited battery life, and that isn't always possible with performance-focused CPU architectures. Yes, this means that Tremont is cut-back when compared to Sunny Cove in some regards. However, the smart thing about Tremont is that these cutbacks can enable increased performance-per-watt in low power scenarios, giving Intel an edge in ultra-low-power x86 systems.

When comparing Tremont to Goldmont Plus, Intel measures a 10-80% IPC boost, presenting an IPC boost that averages at 30% in single-threaded workloads. This is a big deal for Intel's next low-power CPU architecture, though at this time we do not know what this means in terms of performance per watt.

Tremont is a 10nm ISA from Intel, which is due to be integrated into Intel's Lakefield processor using Feveros technology. Lakefield is due to power Microsoft's upcoming Surface Neo device. 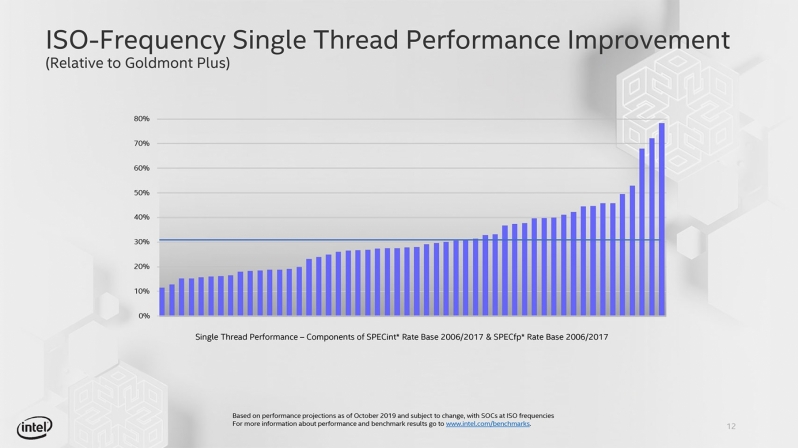 When compared to Sunny Cove, Tremont cannot deliver the same levels of maximum performance. Even so, the architecture can deliver 50% of Sunny Cove's performance while using less power and scale to much lower power consumption levels.

The graph below showcases the need for Intel's Lakefield processors, which offer users both Tremont and Sunny Cove CPU cores. Sunny Cove can serve the need for high single-threaded performance, while Tremont can focus on delivering greater performance per watt. 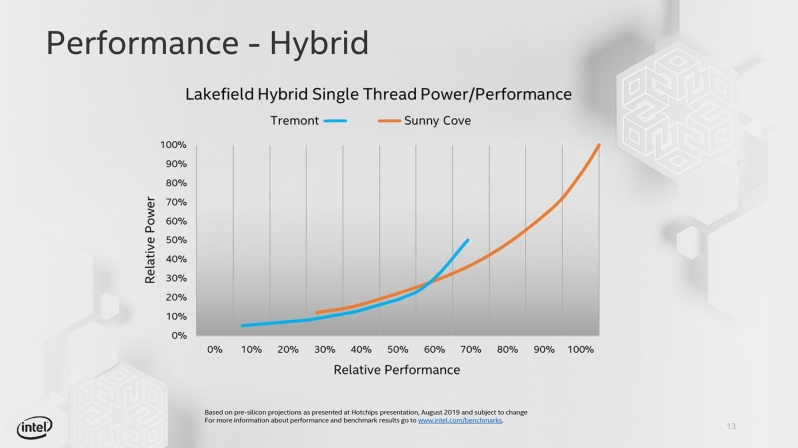 With Tremont, Intel wants to push its advantages in the low-power x86 market by delivering increased single-threaded performance while maintaining low levels of power consumption.

Intel hopes that this will be enough to limit the growth of ARM-based Windows devices, and to bring x86 into smaller form factors. 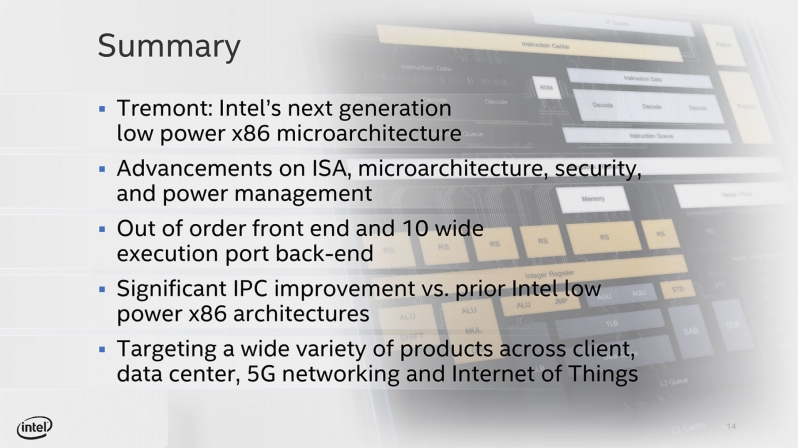 Intel's Tremont cores will be seen in Intel's Lakefield series of processors, which are due to utilise Intel's Foveros chip stacking technology and utilise both low-power Tremont and powerful Sunny Cove CPU cores.

You can join the discussion on Intel's 10nm Tremont architecture on the OC3D Forums.

demonking
AKA the back up plan for 10nm not being anywhere near what they wanted it to be.
Ultra low power desktop CPU's inbound labelled as ECO power CPU's.
Intel: "We are the most economically conscious supplier of CPU's, performance numbers mean nothing to us when we can save the world. If you buy ours over those power hungry parts from other suppliers, you are doing your bit to save the world from global warming"