This week, Intel marketing slides from a recent "Partner Connect" event leaked online thanks to AdoredTV, bringing to light some of the flawed comparisons which were being shown to the company's partners.

In the slide below, Intel states that they can offer users "superior gaming performance" at a lower price, highlighting the value provided by Intel-powered gaming laptops. That said, the comparison made by Intel is an unfair one, as both systems utilise different versions of Nvidia's mobile RTX 2060 graphics processor.

While Intel claims an 18-22% performance advantage, it is worth noting that the AMD-powered ROG Zephyrus G14 used contains an Nvidia RTX 2060 Max-Q, a 65W graphics card, while the Intel-powered MSI GL65 Leopard uses a 90W RTX 2060 graphics card. That 25W of extra GPU power makes all the difference, as it allows the Intel-powered system to deliver much higher GPU clock speeds and performance levels.

While the Intel processor used in this comparison is a faster gaming system and more affordable, it is worth remembering that there is more to laptops than raw performance numbers. Remember that the AMD-powered system in this comparison uses a 35W Ryzen 4900HS processors and a 65W RTX 2060 Max-Q GPU, while the Intel-based system uses a 45W i7-10750H and a 90W RTX 2060.

The AMD system, the ASUS ROG Zephyrus G14, uses lower-powered components than the Intel-based MSI GL65 Leopard. The Intel-based system is also much larger, featuring a 15.6-inch screen instead of the Zephyrus' 14-inch screen and a 27.5mm thick chassis instead of ASUS' 22.2mm thick one.

What we are getting at is that size, weight and battery life matter. All of these factors are important decisions, and Intel's comparison only considers performance and pricing. It is also arguable that Intel's performance advantage is due to their use of stronger Nvidia graphics, not an Intel processor.

Most reviewers praised ASUS' Zephyrus G14 because of what it achieved within its weight and size category. After considering that, you should see why Intel comparing it to a larger, heavier laptop makes for a silly comparison. 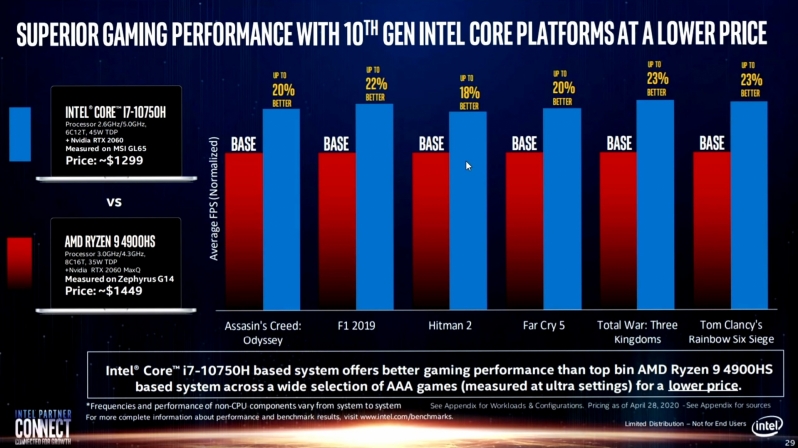 With today's CPU market being so competitive, it is worth noting that there is more computing than raw performance. Power consumption needs to be considered, as does value for money and (in the case of the custom PC market) platform longevity. Both AMD and Intel have applications, workloads and use cases where they can claim an advantage over the other.

What's wrong with Intel's approach is that they are claiming to offer better performance in real-world usages, but they are often using flawed comparisons to do this. Why compare Intel's 9700K to AMD's 3950X? Where's the 3800X comparison? If Intel wants to argue that most applications don't use more cores, then why isn't there an Intel 8-core VS AMD 8-core comparison? If you are telling me that you don't need the extra cores, you need to then prove that your 8-core offers the best value.

Perhaps Intel didn't want to draw attention to the 3800X's lower MSRP, or Intel has simply forgotten how to make useful comparisons. At a minimum, these slides are dishonest. 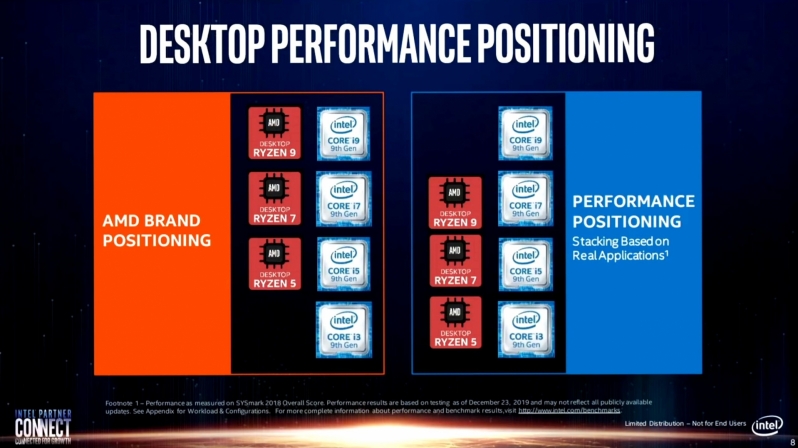 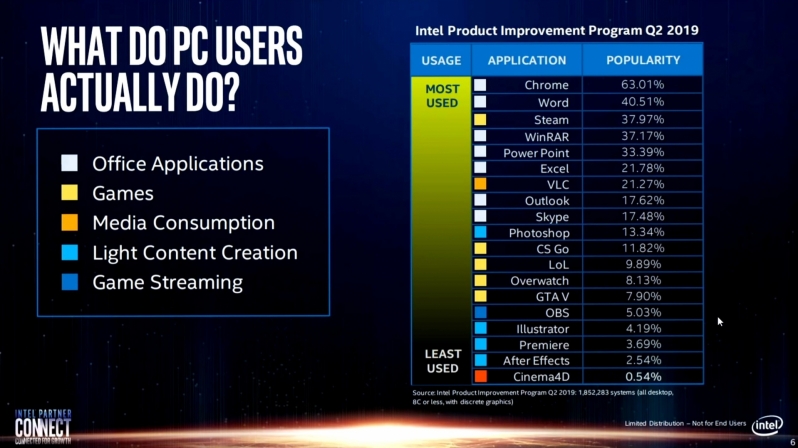 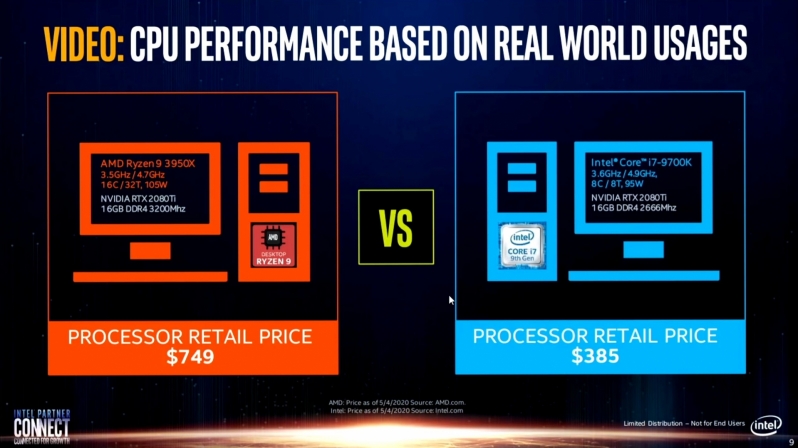 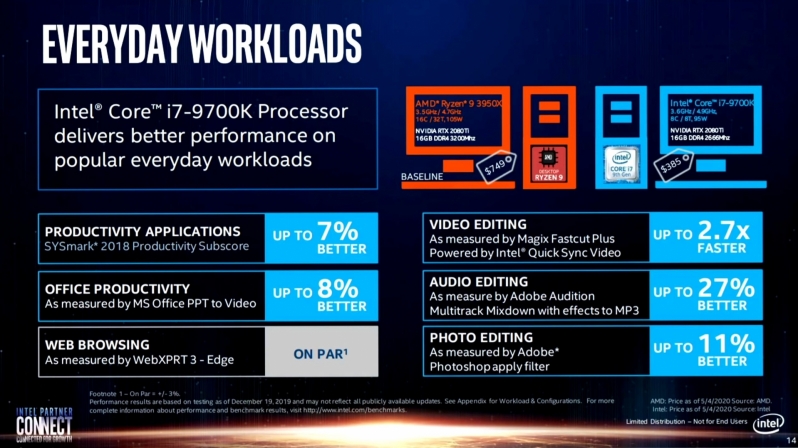 While these slides were not designed for public consumption, they are nonetheless designed to convey a message which contains an uncomfortable amount of spin. Yes, Intel raises some great talking points, but they have opened the door to a lot of criticism here, as they are misrepresenting their rival.

You can join the discussion on Intel's flawed gaming laptop/desktop comparisons on the OC3D Forums.

Avet
Is Intel run by morons? Do they think that they are Apple and can sell garbage to consumers without them asking questions? They are just digging the hole deeper and deeper for themselves. Media are like vultures over them because of the recent catastrophes. Chill out. You have new CPUs in the pipeline, you own a majority of the Server, and Mobile markers. Relax and wait for bumps in the manufacturing process to iron out and then go full ham.

This way they just encourage people, and OEMs to ditch them for AMD.Quote

amon.akira
from below the image with comparison

AlienALX
Sounds like WD are about to get butt reamed as well. Serves them right tbh.

Intel? I actually expect it at this point.Quote

ImprovizoR
In a million years I would not presume to even try to compare a 14" and a 15.6" laptop as if they were equal or comparable. The size of the display alone is a major, and often key factor when deciding what model to get.Quote
Reply