There is no denying that Intel's upcoming Ice lake architecture is an impressive engineering feat, with Intel reporting an average IPC improvement of a staggering 18% over Skylake, though it is worth remembering that Skylake released in 2015.

IPC as a catch-all term doesn't apply to all benchmarks, so single workloads should not be seen as representative of all scenarios. Some programs will benefit significantly from specific architectural enhancement, whereas some applications may not be impacted at all.

Recently, benchmarking data from a Chinese forum has been making the rounds, highlighting that Ice Lake offers a 40% IPC boost over Skylake in a version of CPU-Z in single-threaded workloads.

For starters, CPU-Z isn't a great benchmark to using here, as it is worth remembering that the tool's benchmark needed to be redesigned to accommodate AMD's Ryzen processors (more info on this is available here), which in the tool's original benchmark offered a 30% IPC advantage over Intel, something which was not replicable outside of CPU-Z. Similar issues could be happening with Ice Lake, or this data could be entirely false. 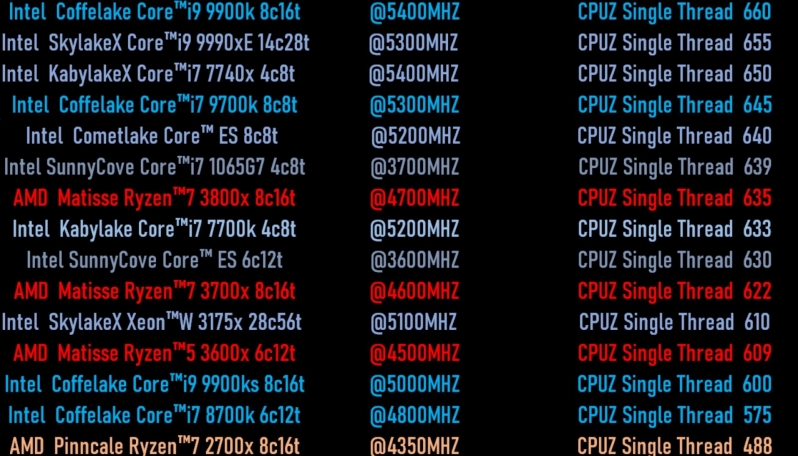 Even if Ice Lake offers a 40% IPC here, it is worth remembering that IPC in a specific application is not indicative of performance in other scenarios. See the chart below and how Intel's Ice Lake/Sunny Cove performance advantage varies across a wide range of tests. 18% was found to be an average value for IPC improvement, but as you can see outlier results have performance gains in the single-digit percentages while others can see performance benefits of greater than 30%.

As you can see in the slide below, which comes from Intel, the company's Sunny Cove/Ice Lake processors can offer between 0% and 40% performance gains over Skylake. This is why average values matter, but when it comes to IPC gains, they should always be considered as application specific, though average changes are useful for explaining generational performance trends. 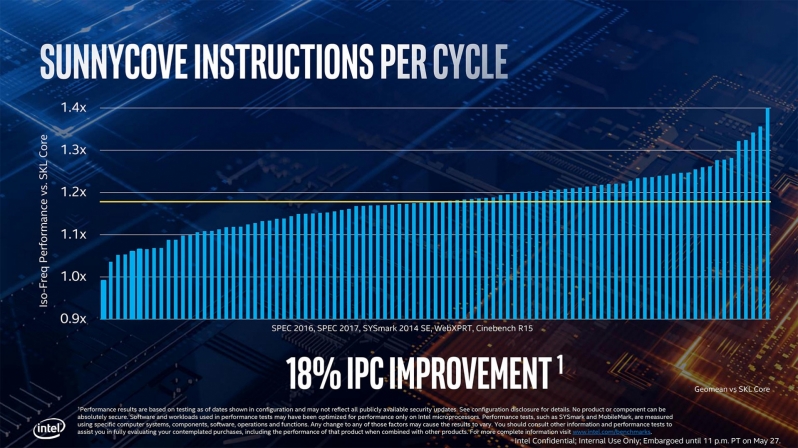 In our eyes, this data is highly suspicious, uses a benchmark that has been known to react strangely to new CPU architectures and if true presents data that is not representative of Intel's IPC claims for Ice Lake.

Don't look at this result and think that Ice Lake is going to be amazing. Temper your expectations, if Intel advertises an 18% IPC boost, don't believe a random forum post that promises a 40% uplift. This data is more than suspicious enough to dismiss, but, as usual, this info has been spread through enough tech sites that we feel the need to bring some common sense to this discussion.

You can join the discussion on Ice Lake's reported 40% IPC uplift on the OC3D Forums.

Giggyolly
18% IPC is all well and good, but we won't see any flagship desktop parts unless they can get their clocks up. Which seems unlikelyQuote

tgrech
Yeah early insider reports(From impeccably reliable sources on this topic) are that ~4.1Ghz is the fundamental architectural limit to clock speeds, this happens when you take things so wide that attempting to use higher clock speeds results in too little time between clock pulses for the combinational logic blocks to be ready in time(Have their results in the registers) for the next pulse. (It's worth noting that going wider is almost always more efficient though)

You can get around this problem with node changes specifically if those changes reduce the latency induced by logic gates(On the single digit nanoseconds scale) but they won't be able to get around this issue just from more mature silicon on the same node type. Otherwise you need to modify the arch with more aggressive pipelining(But go too aggressive and you harm efficiency & IPC).

It seems likely Intel will skip Sunny Cove for desktop entirely until Saphire Rapids(Or whatever they end up calling the successive arch) is ready(~2021), it'd probably just get shown up by 14nm comet lake. Sunny Cove is good for laptops or servers(Like 80% of their income tbf), but at best a side step for performance desktop, as the IPC gains will be negated by the clock speed hit.Quote
Reply