Intel is putting more Cache on the table with Ice Lake

For the past few years, Intel's Core processor designs have remained relatively unchanged, at least in the consumer market. Today's Coffee Lake Core i9-9900K offers similar levels of performance per clock as 2015's Skylake-based i7-6700K. Since then Intel's iGPU has changed to accommodate 4K media and both core clock speeds, and core/thread counts have increased, but fundamentally, Coffee Lake remains exceptionally similar to Skylake.

Ice Lake, Intel's first 10nm CPU architecture, will be Intel's first major departure from their Skylake microarchitecture, bringing with it the prospect of an IPC (performance per clock) increases as well the power and transistor scaling benefits of Intel's planned 10nm lithography node. These factors will have a significant impact on the company's next-generation product designs, especially when it comes to performance-per-watt.

Intel is expected to release their first 10nm products in late 2019, after AMD launches their initial 7nm Zen 2 product offerings. With this in mind, Intel needs to pack Ice Lake with a considerable performance boost over Coffee Lake to continue their leadership of the x86 CPU market.

Ice Lake products have started to appear on the Geekbench database, revealing our first glimpse at Intel's next-generation microarchitecture, revealing significant changes to Intel's Cache hierarchy over their older designs.

For starters, Intel's L1D (data) cache has increased in size from 32KB to 48KB, a 50% increase, while the microarchitecture's L2 Cache has doubled in size from 256 KB to 512 KB. The processors L3 Cache sits at 4MB, though Intel is known to vary their L3 cache sizes on an SKU-by-SKU basis, making this spec somewhat irrelevant. 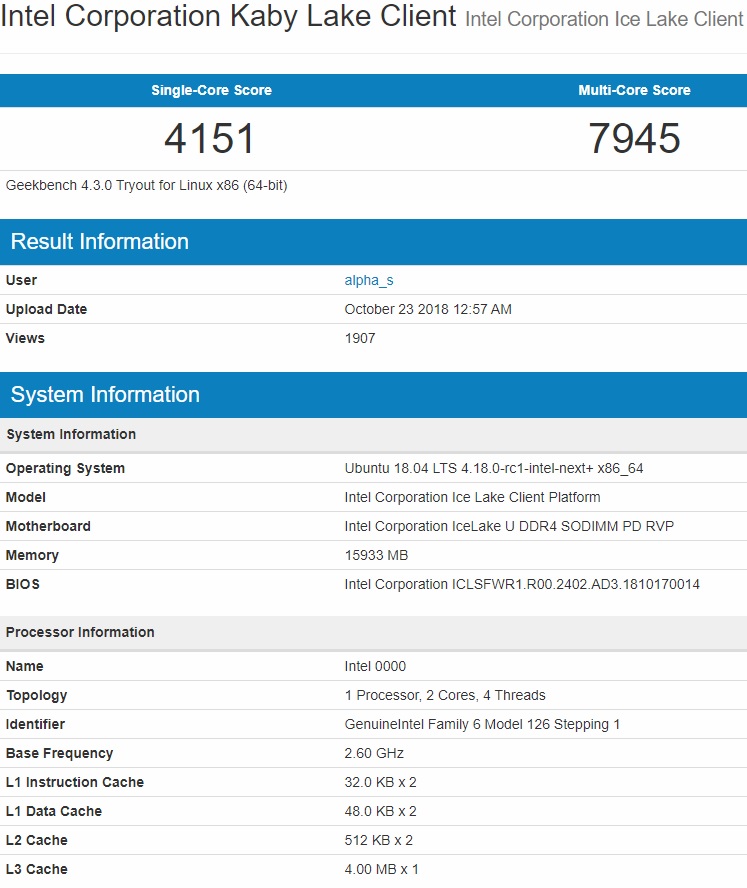 Even with what little information we have, we can be sure that Intel's Ice Lake architecture will be the first major architectural leap from Intel that we have seen for over three years, offering up the potential for Intel to offer a major boost to per-core performance over today's Coffee Lake offerings. What remains to be seen is how well Intel long-delayed 10nm process will cope with the new architecture. Will Intel's core clock speeds regress from 5GHz with this new product generation? Can 10nm offer the same clock speeds at Intel ultra-refined 14nm designs?

You can join the discussion on Intel's Ice Lake core architecture on the OC3D Forums.

tgrech
I don't expect desktop models will be nearly as close as the mobile SKUs, much like with 14nm's launch.

Larger dies are obviously far harder to produce and much more expensive when on an immature node with a higher rate of defects, and now Intels mainstream desktop SKUs go upto 8-cores.

I think we'll see the low-TDP/mobile (2 cores/4 threads) parts with a semi-paper launch and a few month ramp up followed by the 4-core/8-thread desktop & mobile parts a few months after that depending on how yields improve. The i5's and i7's will likely be at least 6 months behind the original mobile parts hitting shelves, and that could be an optimistic estimate.Quote
Reply