Intel i7 7700K CPUs are starting to be sold at £330 in the UK, which is a £20 decrease over the CPU's original MSRP of £350 when it launched in January.
So far Scan, Ebuyer and Amazon UK have reduced the prices of their i7 7700K CPUs below £335, all of which are retailers who sold these CPUs for £349.99 or over at launch. In Scan's case, the company reduced the price of their i7 7700K on February 22nd, on the same day as Ryzen's pre-orders went live, with Ebuyer reducing the price of their CPUs a few days earlier on February 17th.
While these new priced can be the result of normal price fluctuations and competition between these retailers, it is worth nothing that this is a downward pricing trend that has occurred just one month after Kaby Lake's launch, which is unusual for a high-end product.
Since launch, the price of the i7 7700K has typically been around £340-350 at most retailers, with pricing as high as £370-390 on occasion. Price fluctuations are normal, but it seems that a large number of the UK's biggest retailers are settling for a price of around £330-335 for the i7 7700K. 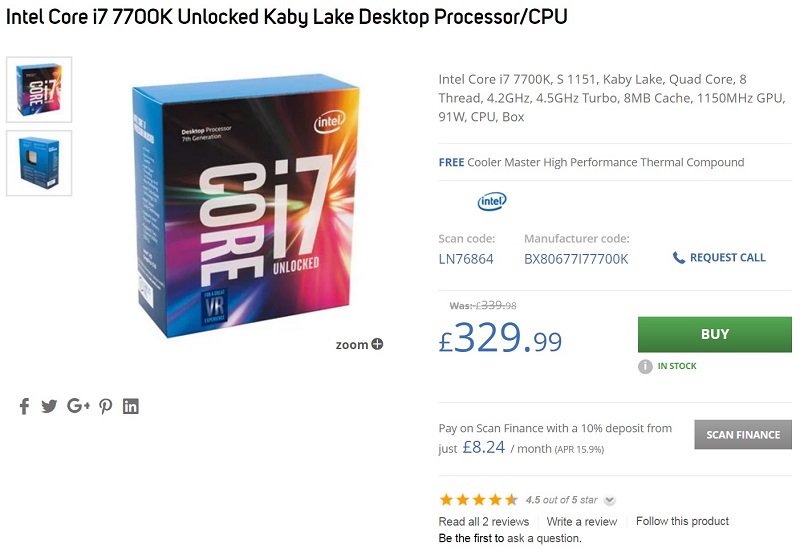 To be clear this is not the sign of an incoming price war between AMD and Intel, though it does show that retailers are concerned about Kaby Lake sales as Ryzen comes to market.

One thing worth noting is that AMD's Ryzen 7 1700 has an MSRP of £319.99 in the UK, which is troubling for Intel given this CPU's sheer core/thread count when compared to their current-gen Kaby Lake offerings.

Right now the pricing of other Intel CPUs seems relatively unchanged in the UK, which is expected given Ryzen's lack of products in the sub-£300 CPU market. After all, there is no need to lower prices if that section of the market has no competition.

You can join the discussion on Intel's £330 Kaby Lake CPUs on the OC3D Forums.

AlienALX
So it's £10 more than the 1700 which has double the core and thread count.

SpencerUk
Can't say nobody didn't expect some form of price reduction given Ryzens pricing and hype.

I implore everyone to go AMD!! xDQuote

RobM
they need to reduce a lot more to compete tbhQuote

spies_sparks
I will wait the benchmarks. Double the cores means so little nowadays.Quote
Reply