Intel expects 7nm to be ready in two years

Intel expects 7nm to be ready in two years

10nm is an undeniable stain on Intel's reputation, arriving so late that it has moved from being a joke to become a major concern for the company. With the release of their 14nm manufacturing process, Intel was years ahead of competing foundries, but now both TSMC and Samsung caught up.

Today, AMD has 7nm desktop-grade processors available on store shelves while Intel is merely shipping 10nm mobile chips to notebook makers. We will note that TSMC's 7nm process is a competitor to Intel's 10nm process. That said it's also worth noting that high power desktop-grade silicon is harder to produce than low power mobile processors.

Moving forward, Intel's CEO, Bob Swan, has confirmed that the company plans to have their next-generation 7nm process ready in two years. 7nm is currently set to deliver a 2x increase in silicon density and a 4x decrease in design rules, making their future chips smaller and easier to design.

This move will make 10nm a shortlived node for Intel, at least when compared to 14nm, which has seen its lifespan stretched to its limits as 10nm suffered from delay after delay. 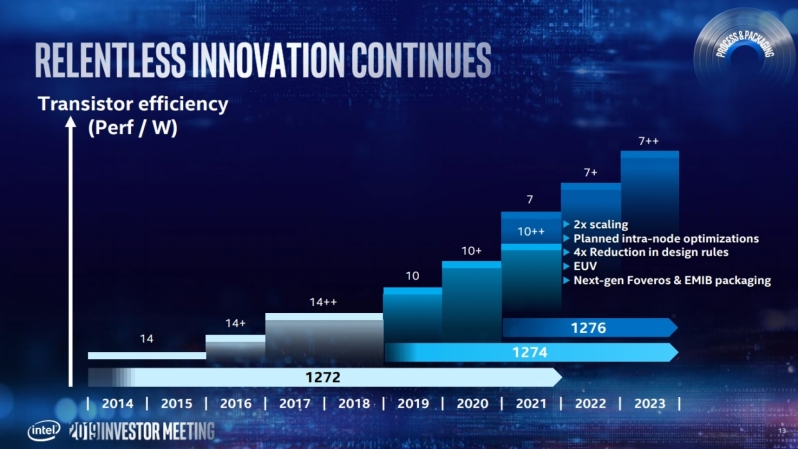 Swan blamed Intel's 10nm delays on overambition, stating that the node was "too aggressive". At a time where process node shrinks were becoming harder, Intel set a design target that was more ambitious than ever before. This set up Intel for disaster.

Intel's planned 7nm process will utilise EUV technology and is due to be production-ready in 2021 alongside Intel's refined 10nm++ process. Intel's long-awaited dedicated graphics cards are likely to be amongst the company's initial 7nm offerings.

You can join the discussion on Intel's 7nm process node on the OC3D Forums.

NeverBackDown
Honestly I would have gave up on 10nm put all the money into 7nm to speed that up or instead use that 10nm to speed up the design of the next architecture of whatever they were planning on. Would have saved them a lot of wasted time. I doubt 10nm will pay for itself with so much money going into it and so little time to sell.Quote

grec
Yeah they only kept 10nm to save face to investors. Engineers were leaking that there were major issues with the node as far back as 2015, and once 2016 came along and it started to seem like EUV could be just about economical this decade there was a lot of internal pressure to drop 10nm's and move on to their EUV successor/7nm, but apparently it was seen as a PR disaster that would have too much of an impact on stock performance so they trimmed it down, massively cut projected production, cut out loads of products set to launch on it, moved more or less all major development to 7nm and products that use it and have left 10nm as a gap filler for certain specific markets with less than a quarter of the initial fab space committed to it.Quote

looz
I wonder if the old rule still applies, as in Intel's manufacturing notation is more stringent and their 7nm is going to be "smaller" than others'Quote

grec
What Intel calls 7nm will still be smaller than what everyone else calls 7nm because everyone still uses roughly the same naming scheme. However their 7nm launches when everyone else's 5nm does and will be their first EUV generation vs everyone else's 2nd or 3rd.Quote