Cascade Lake will ship in Q4

Intel's transition to 10nm has been filled with issues, so much so that 14nm has remained with us for four product generations on the desktop/client market so far.

This delay has fundamentally changed Intel's product roadmap, with Cannon Lake disappearing into the ether while new names like Whiskey Lake and Cooper Lake emerge.

During Intel's 2018 Datacenter Summit, the company discussed their future product roadmap, officially revealing a new 14nm product while reminding their customers and industry analysts that their products stack extends beyond traditional CPUs. Optane memory was a major focus of the summit, as was AI, both of which are heralded as strong points for Intel's product roadmap.

In the data center market, Intel's next generation of processors will be known as Cascade Lake. Cascade Lake processors will start shipping in Q4 this year with support for Optane memory DIMMs and built-in security mitigations for Spectre/Meltdown. The new architecture will also offer a boost to machine learning performance through its support of Variable Length Neural Network Instructions (VNNI) to offer up to an 11x performance boost over Skylake-SP.

Beyond Cascade Lake, Intel plans to release a new 14nm product called Cooper Lake in Late 2018, a product that will be socket compatible with future 10nm Ice lake processors and offer support for the bfloat16 data format, which is designed for deep learning.

10nm Ice Lake processors are set to release in 2020, with Intel stating that Ice Lake will follow on from Cooper Late sooner than usual, placing its release in mid-late 2020. Intel Typically releases server products every 12-18 months, making the yearly (or faster) launches of Cascade Lake, Cooper Lake and ice Lake highly unusual. 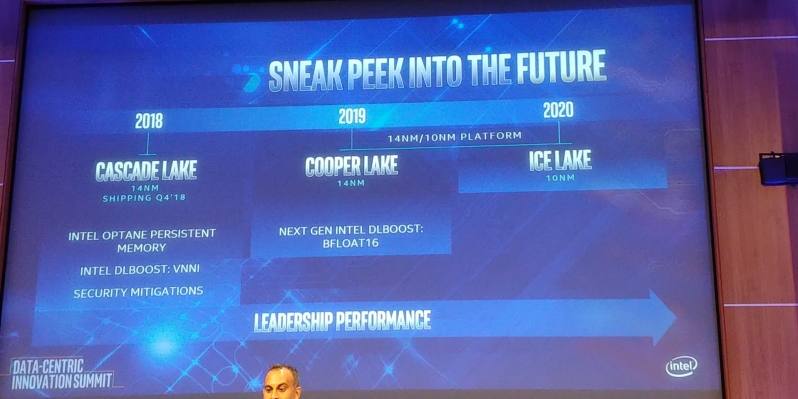 Intel is confident that their 10nm delays will not harm the competitiveness of their roadmap, with Optane memory DIMMs and AI performance showcasing areas of the market that competitors like AMD cannot take away from them.

On the consumer/client side, Intel has committed to having 10nm products on store shelves in 2019.

You can join the discussion on Intel's server roadmap, Cascade Lake and the road to 10nm on the OC3D Forums.