Intel discusses the difficulties of increasing CPU frequencies - Why have we not reached 10GHz?

Intel discusses the difficulty of increasing CPU frequencies - Why have we not reached 10GHz?

In recent years CPU clock speeds haven't increased that much, especially within the high-end overclocking scene. Back in the days of Sandy Bridge, it wasn't uncommon to hear about 5GHz overclocks on an i5 2500K or an i7 2600K, with today's i5 8600K and i7 8700K being able to achieve similar overclocks.

This lack of clock speed evolution raised a single question, why have clock speeds stagnated in recent years? Well, Intel has decided to explain why clock speeds are not increasing as rapidly as they did in the past and why "10 GHz result is still as unreachable now as it was five years ago".

The primary barrier to higher clock speeds is heat production, as increased clocks and the voltages that are required to achieve them dramatically increase a processors heat output. To put things simply, increasing a processors voltage can allow transistors to switch faster, the problem here is that processor frequencies are not directly proportional to voltage, it is proportional to the voltage squared.

This correlation means that raising voltages will have diminishing returns and substantial thermal consequences as overclockers aim for higher clock speeds. This insane heat output at high clock speeds is why pro overclockers require Liquid Nitrogen for cooling and require insanely high voltages to achieve world record overclocks. Higher voltages alone is not the best solution to the clock speed problem.

Clock speeds can continue to be increased as long as the slowest instruction can still fit within a single clock window, but what happens when clocks are raised further. 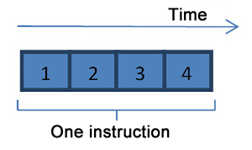 In the diagram below you can see that each stage takes different lengths of time, with stage 3 being the bottleneck. If we try to increase clock speeds further, stage 3 will start taking up two clock cycles, causing problems for any instructions that are set to be completed simultaneously.

The problem here is that while specific actions will happen at a faster rate, ultimately the system will be bottlenecked by its slowest stage, creating a product that doesn't get any faster with higher clock speeds.

There are two ways to solve this design problem. First, there is process node advancement, where reducing the size of the manufacturing node will shrink the size of a processors execution units. In smaller units, electrical impulses have shorter distances to travel and can, therefore, take less time to complete allowing all stages to be increased in speed by a similar amount of time. The longest stage will still be a limiting factor, but at least the stage is shorter than it was before.

Process node technology is highly sophisticated, with many other factors coming into play that can prevent traditional clock speed increased. This complexity is why we don't see insane increases in clock speeds when moving to a new process node these days, though that doesn't mean that new process nodes don't help. 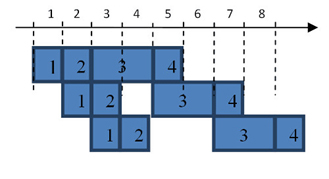 The other way to increase clock speeds is to split the longest stage into two processes that can be separated into two clock cycles. While this has been an incredibly successful process in the past, but this becomes a lot more complex after all of the more obvious changes have already been made.

After a certain point, the longest stage is not much larger than the next largest, offering diminishing returns and the need to redesign huge sections of a processor to deliver a meaningful impact on clock speeds. Compound this with how interconnected a modern processor is, making it extremely challenging to make these kinds of adjustments without substantial architectural overhauls. One stage will affect the next, requiring more complex design changes as processors continue to develop.

In the early days of the CPU market, there was a lot of low hanging fruit to gather when it came to processing technology and more obvious processor design changes to make. Today we have a very different story, as all of this fruit has been gathered, and now engineers have to take increasingly challenging steps forward to make a major impact.

With the development of process technology slowing down increases in performance are becoming increasingly dependant on the engineering talent at companies like AMD, Nvidia and Intel, where increasingly radical design changes are required to increase product performance.

This is then when we come to the idea of IPC (Instructions Per Clock), where some design changes are made that will increase the productivity of specific areas of processors that sometimes sacrifices clock speeds, explaining why certain CPU generations like Ivy Bridge offered decreased max overclocks but offered improved performance at lower clock speeds.

For a more detailed summary, we would advise reading Intel's write-up here.

You can join the discussion on why CPUs haven't reached 10GHz yet on the OC3D Forums.

NeverBackDown
Don't forget that in addition your write up that the scaling of voltage and current are reaching their limits and as they do, current leak grows which provides more heat to the CPU and reduces performance, or at least that's how I understand it so far. Not that far into my physics courses and haven't hit the required laws of physics to fully understand what happens at a transistor level.Quote

Avet
Quote:
With current architecture you need exponentially more voltage for higher clocks, as stated. The only problem is the heat. More current trough wire equals more heat. If you can remove it you can scale to the physical limit of the components. You can see pro overclockers reaching insane clocks just buy removing heat with LN2 and providing enough current. After a certain point the amount of current required to go one step higher in clocks becomes very high, and not practical at all. So you can go up, but it is just not viable. That is the limitation, and the way that current technology works.

What is happening is that technology in current CPUs was developed a decade ago or more, and wasn't meant to go this high. They just refined it. But now they can't refine it further more.

Theoretically intel can reach 10Ghz in their labs with current technology but it will require liquid helium cooling, and insane amount of current. That is just not viable for consumer use. So they went and optimized other things to improve performance, rather than go for clock only.

You can also reduce current requirements with going to smaller fabrication process but that can also scale to the point. Because again that old architecture cannot function at small scale, because it was not designed for it. You can compensate for that but again to the certain point.

Main problem is that we are reaching absolute limit of that architecture that was designed so long ago, and it can't be improved any more. We need completely new design of CPU microarchitecture that is probably way in development, but not ready for consumers. That is why we see core increase. Coffee Lake is the perfect example. Intel did improve things from Sandy Bridge to Kaby Lake. Just a constant stream of improvements from generation to generation. But then they couldn't upgrade Kaby lake anymore so they've put 2 more cores on it and called it an upgrade.

Ice Lake will probably be the last hurrah for current architecture, with maybe a last dying breath with revision after Ice Lake. Then things need to change drastically for bugger steps in performance.Quote

Avet
Quote:
Yes you are right. Intel could put higher end components on them to make them more comfortable on high voltage. But for what end? They know the limits of their chip.

Architecture as it is can do well, and it is tuned for clocks up to 5GHz. All the components are scaled to that level of performance. Everything above just pulls to much power, and creates insane heat for the gains.Quote