If you didn't expect Ice Lake to be a big upgrade over Skylake, what rock have you been lying under? Skylake released back in 2015, four years ago, and Intel has been hard at work creating something new to replace their ageing core designs.

Cannonlake was originally slated to replace Skylake, but no longer. Cannonlake is dead, Intel has moved on to newer and better designs. Intel architectural engineers have not been sitting down and twiddling their thumbs for the past four years, and Ice Lake's new Sunny Cove core design is the fruit of their efforts.

AMD made a big fuss over their 15% IPC boost with Zen 2, but Intel boasts an 18% IPC boost with Ice Lake's Sunny Cove cores, though it is worth remembering that Ice Lake will initially release as a notebook-only part later this year. AMD's Zen 2 designs will release on the desktop and server markets long before Sunny Cove, and in the high-end, it is unknown how Intel's fast Intel's 10nm processors will be in terms of raw clock speed. 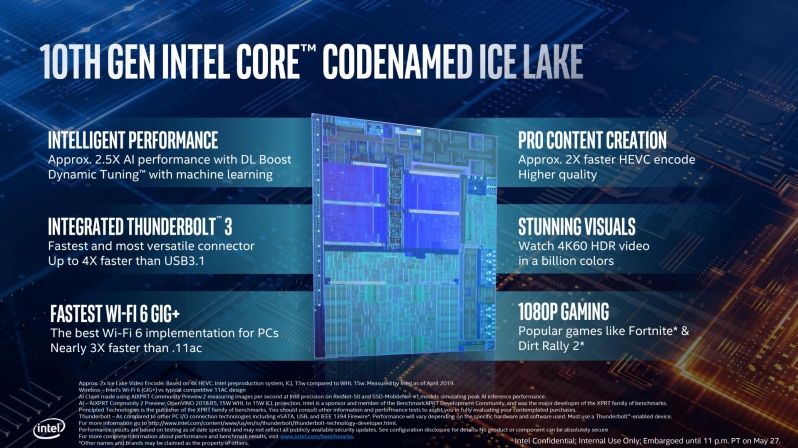 With Intel's Ice Lake processors launching with a mobile focus, Intel has created their initial designs with support for both LPDDR4X and standard DDR4 memory, offering support for DDR4 3200MHz DIMMs and LPDDR4 3733MHz memory. Not bad for a mobile-focused processor.

Ice Lake will also support WiFi 6, but it comes as part of a secondary chip on Intel's Ice Lake PCH. 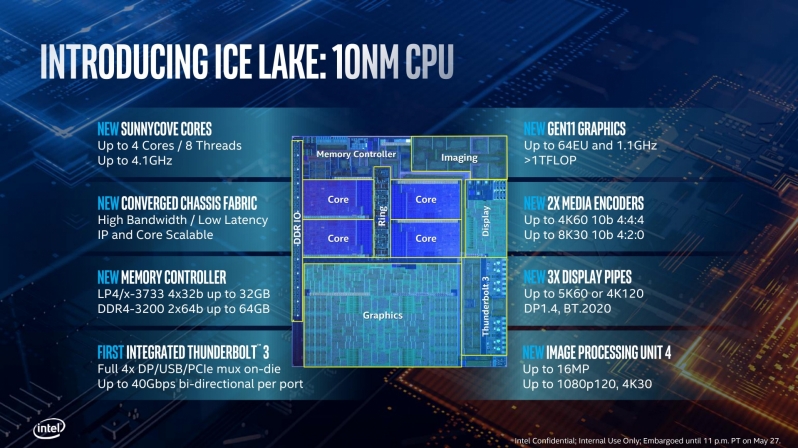 A lot has changed with Sunny Cove under the hood, with Intel working to add new instructions and capabilities to their processor while adding additional L1, L2 and L3 cache.

Intel's core changes are designed to allow their latest architecture to access data quickly, compute it at a faster rate and to add new core capabilities to accelerate specific types of data. With Sunny Cove, Intel's AI performance can be up to 2.5x faster than before. 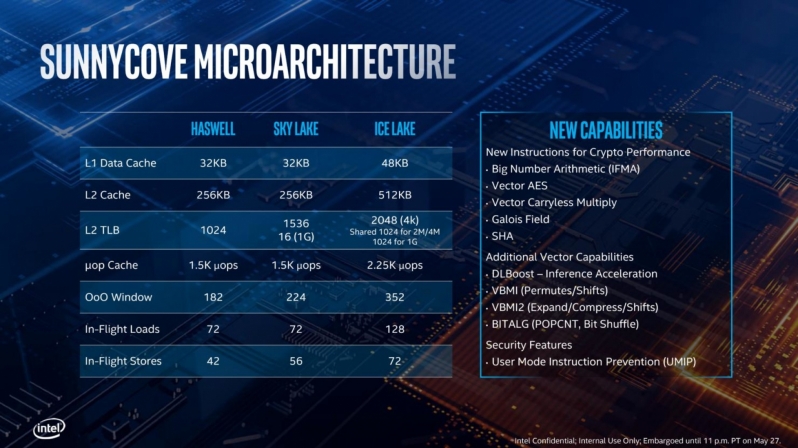 The downsides for Intel's 10th Generation ice Lake designs is that they do not come soon enough. Yes, releasing for mobile platforms is a good thing, but that will not stand in the way of AMD's Zen 2 designs. AMD's Ryzen 3rd Generation processors release within the next two months, whereas Intel has no ETA for desktop-grade 10th Generation Ice Lake products.

Ice Lake and its Sunny Cove cores sound great on paper, but they will ultimately come too late to challenge AMD's Zen 2 lineup in the desktop and enterprise markets. Beyond that, Intel's IPC boost with Sunny Cove will only matter if Intel can maintain the high clock speeds that were available on their highly refined 14nm process node, as otherwise their IPC advantage will be countered by a clock speed regression. By the time Ice Lake releases on desktop, AMD may release Zen 2+ processors or even Zen 3. 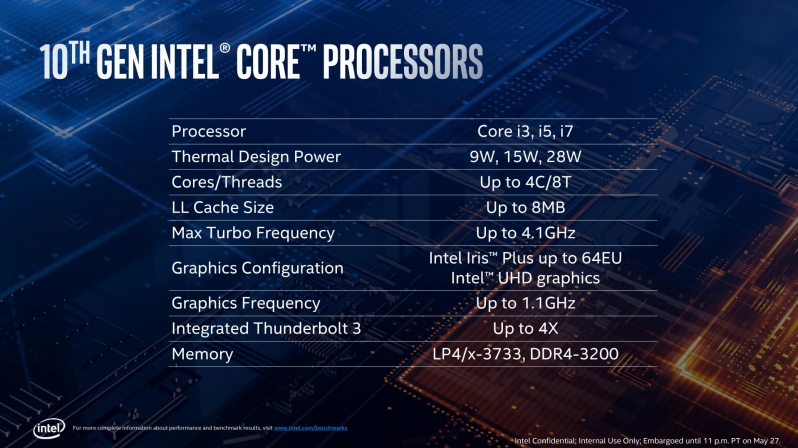 Intel's Ice Lake architecture is an incredibly interesting piece of design and technology, but it is worth noting that right now it targets a completely different market than AMD's Zen 2 products. This is a mobile processor with up to four cores, whereas AMD's Zen 2 units are 6-12 core designs that are designed for high-end desktops.

You can join the discussion on Intel's 10nm Ice Lake architecture on the OC3D Forums.

g0ggles1994
Key here is that they're calling an 18% boost over Skylake, not mentioning Kaby Lake or Coffee Lake; so in reality, this boost will be a lot lower.

Also, no mention of vulnerability mitigations within the silicon? Hmmm.Quote

AlienALX
Lmao I seriously read that as "condemned Ice Lake"Quote

tgrech
Quote:
I think they mean "Skylake" as in the architecture, going from their image, so that would include Kaby & Coffee lake as they were still both Skylake arch with no IPC gains/difference.Quote

NeverBackDown
They might sell more as Laptops outsell Desktops, but the margins probably won't be as high. I still feel like AMD wins this round tbh.Quote
Reply