Intel delays its 7nm node - The company's roadmap is broken

Intel delays its 7nm node - The company's roadmap is broken

Things have gone from bad to worse over at Intel, who have just announced that their 7nm process tech is 12 months behind the company's internal targets, delaying the company's entire roadmap.

If you don't see this delay as bad news for Intel, you haven't been looking closely enough. Even today, Intel hasn't released a 10nm processor onto the desktop CPU market, and hopes were high that 7nm would be Intel's return to form. Now, based on what we now know, 7nm appears to be another problem node for Intel.

While Intel has claimed that the company will see a six-month delay in their 7nm CPU launch timings, it is challenging to believe that a node that's 12-month behind schedule will be able to produce processors with a shorter delay. We have heard for years regarding 10nm, short delays at Intel can easily turn into longer ones. The question now is if analysts should even take Intel at their word anymore.

Thankfully, Intel doesn't see any "fundamental roadblocks" on their road to 7nm. Even so, Intel's 7nm-based processors are now due to hit the market in late 2022 or in 2023, which is likely to be long after AMD and Intel's other competitors move to similarly-sized 5nm nodes from foundries like TSMC.

That's right, Intel is using a 3rd party node for Ponte Vecchio. If nothing else, this shows Intel's lack of confidence in their own silicon producing capabilities. Intel's fabs were once the company's pride, and now they are looking more and more like a liability.

Below is a comment from Intel's CEO, Bob Swan, as transcribed by Seeking Alpha;

Turning to our 7-nanometer technology. We are seeing an approximate six-month shift in our 7-nanometer -based CPU product timing relative to prior expectations. The primary driver is the yield of our 7-nanometer process, which based on recent data, is now trending approximately 12 months behind our internal target.

We have identified a defect mode in our 7-nanometer process that resulted in yield degradation. We’ve root-caused the issue and believe there are no fundamental roadblocks, but we have also invested in contingency plans to hedge against further schedule uncertainty. We’re mitigating the impact of the process delay on our product schedules by leveraging improvements in design methodology such as die disaggregation and advanced packaging.

We have learned from the challenges in our 10-nanometer transition and have a milestone-driven approach to ensure our product competitiveness is not impacted by our process technology roadmap. 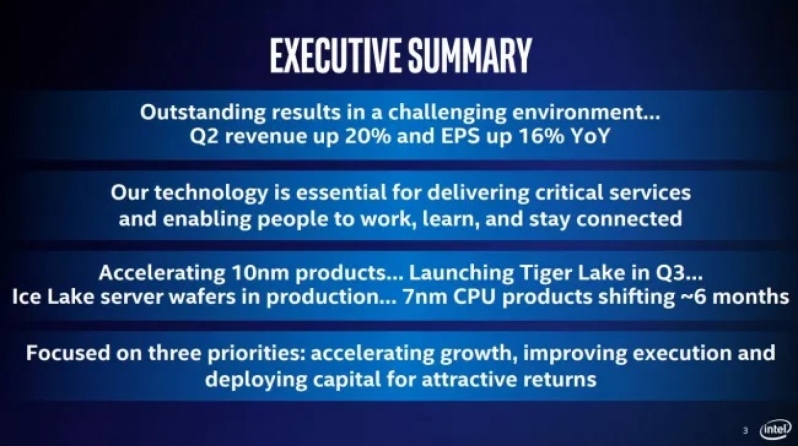 Over the past number of years, AMD has built up an impressive track record of executing on their design and production goals with their Zen architecture, something which sharply contrasts Intel's current situation.

AMD plans to release 5nm Genoa processors in 2022, bringing the company's EPYC processors another process node ahead of Intel. Now, Intel plans to release 7nm data center CPUs in 2023, giving AMD time to gain market share and to build its brand at their expense. If AMD continues to execute with Zen/EPYC, they will be seen as a reliable partner, and if Intel's roadmap continues to be vague and delayed; to say the least, Intel's reputation will be tarnished.

To say that Intel's loss is AMD's gain is an understatement, as Intel's delay is to the benefit of all of the company's competitors. This applies to Amazon and their Graviton ARM processors, Apple and their Apple Silicon, and ARM with their increasingly performance-focused Cortex roadmap. Continued foundry roadmap delays will continue to place Intel behind their competition.

Can Intel even be trusted to execute?

Remember when Intel promised to ship 10nm processors in 2017? Over time that promise has proven to be technically correct but incredibly misleading. Yes, 10nm Cannonlake processors shipped, but in volumes so low that it wasn't a legitimate launch for 10nm. Today, Intel barely acknowledges the existence of Cannonlake.

10nm's first high volume CPU launch was Ice Lake, and it released in mid-2019. That's a huge delay, and proof that small product shifts can turn into something a lot longer and more damaging than what initial announcements imply. In the wake of 10nm, I wouldn't be surprised if Intel's 7nm product delays are longer than Intel's claimed six months. I guess we will have to wait and see.

Intel's 7nm delay will push back the release of all of the company's 7nm products, and while some early 7nm architectures could be backported to 10nm, releasing a processor with a larger node than expected will create transistor count restrictions and inherently limit performance and power efficiency.

You can join the discussion on Intel's 7nm delays on the OC3D Forums.

Bagpuss
The only problem is the worse Intel gets the more cocky & arrogant AMD will get.


We've already seen the early signs of it with Zen 3 backwards compatibility on older B450 boards, needing a consumer outcry for them to backtrack.


Whilst we're still along away from Intel levels of arrogance whilst AMD were in the CPU wilderness, they won't be able to help themselves if Intel keeps falling behind.


..and Intel will still have their server cash cow income to fall back on whilst they sort themselves out on the desktop space, which I don't think they're really all that bothered about, TBH.Quote

RobM
Quote:
Doubt they will hold on to that for much longer.Quote

Warchild
Quote:
Has nothing to do with arrogance, its all about monopoly. Even if AMD were the proverbial gods gift to the world, we cant have one dominating a complete market. Especially when there are only two main players.

Domination in that respect slows down progress. Why innovate when there is no competition?Quote

AngryGoldfish
Quote:
Maybe I'm wrong about this and being overly idealistic, but I don't believe every company in a dominate situation will stop pushing themselves. I mean, take Nvidia as an example. Every generation for the last ten years has been at least innovative, and in most cases has been exemplary. Yet in all that time, they've held market dominance. I know that these businesses are run not just by a passion-driven engineers, but by investors and conglomerates that could care less what they were selling as long as it sold. But there must be companies out there, even big ones, that are driven by more than just an ideal revenue target. I would say AMD and Nvidia fall into that category. I imagine many of the influential heads in those companies don't want to hold back technological advancements. I imagine many of them want to release stellar products if they can, even if they don't technically need to.Quote

Look at Nvidias tactic of holding off with certain models, or releasing the 20xx super. They could have pushed this out from the start. Maybe Innovate was the wrong word, because it could well be they have the tech for running at twice the speed of today. But keep it quiet, for good reason.

Let's say it like this then. Without competition, you only get incremental steps pushed to the market. RTX was great, but performance wise it didn't bring much. And it didnt need to because it was the only one of its kind. If you wanted ray tracing, you had no choice to go green team.Quote
Reply