Don't need Intel's iGPU? You could save some money with Intel's 9th Generation F-series processors

Intel has today announced reduced prices for their Coffee Lake series of 9th Generation F-series processors, allowing buyers to save money by buying their next Intel processor without an integrated graphics component.

So how much is Intel's integrated graphics worth? $25. Yes, now Intel's Coffee Lake F-series processors now cost $25 less than their non-F counterparts across the board. This is a big deal for Intel's low-end models and a minor dent in pricing for flagship models like the i9-9900KF. In the case of the i3-9100F, this represents a 25% price cut over the i3-9100.

This marks a massive change over the launch pricing of Intel's Coffee lake F-series pricing, which was often too similar to their non-F series models to be worth considering at retail. Now, removing the iGPU from your next Intel processors seems like a viable option, offering more value to gamers who don't utilise Intel's integrated graphics technology.

These price changes should be visible at retailers already, giving Intel's Coffee Lake F-series processors the pricing nudge that they need to become worthwhile purchases. 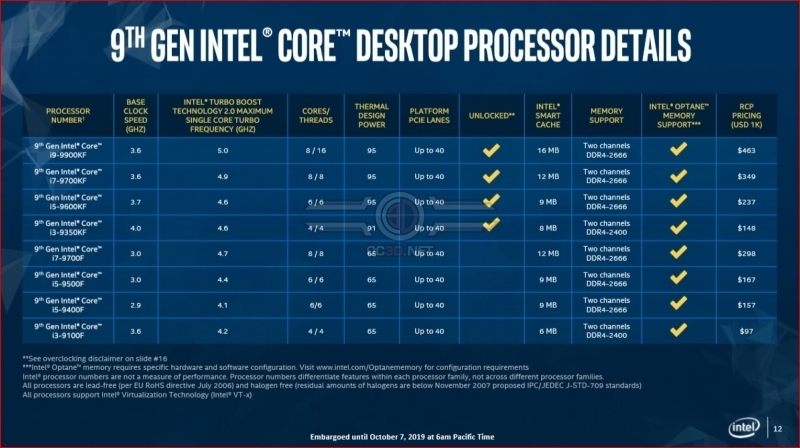 You can join the discussion on Intel's revised 9th Generation Coffee Lake pricing on the OC3D Forums.