Right now Intel is surrounded by a maze of rumours, be them about 10nm, Coffee Lake, Cannon Lake and even their second generation 10nm Ice Lake CPUs.
Rumour has it that Intel will be releasing new CPU products in August, codename Coffee Lake, which will release on a new Z370 socket. If these rumours are true they will be replacing Kaby Lake a mere 8 months after launch, which is sure to leave a sour taste in the mouths of Intel fans.
Coffee Lake is expected to be based on their existing Kaby Lake designs with several core improvements, though the key changes with Coffee Lake will be with the inclusion of 6-core products on a desktop platform. This will be the first time that a 6-core product will not be released on Intel's HEDT platform sockets like X79, X99 and X299.
The CPU shown below comes with a base clock speed of 3.1GHz and a boost clock speed of 4.2GHz, with a total of 12MB of L3 Cache (2MB per core, same as Kaby-Lake). At this time it is unknown if Coffee Lake will function on LGA 1151 motherboards or require a new socket design. 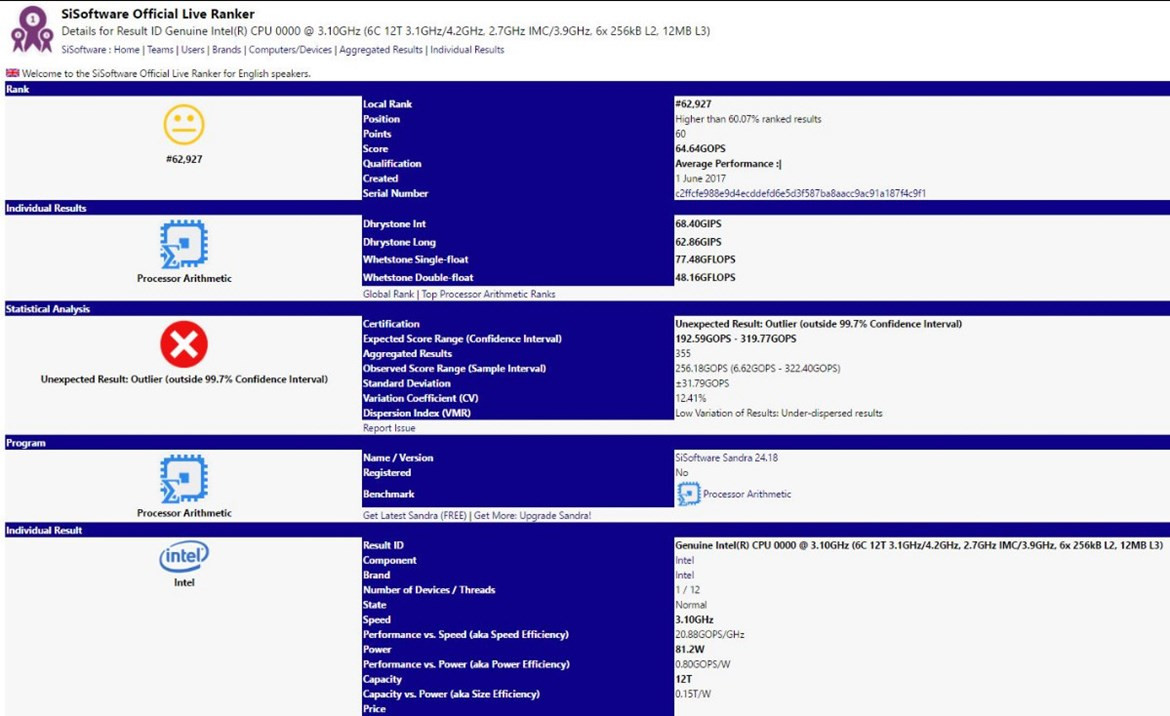 If recent reports are to be believed, Coffee Lake will be based on 14nm and come with 6-core variants on a 149mm^2 die and 4-core parts on a 126mm^2 die, which means that quad-core parts will not be 6-cores with disabled hardware.

At this time, Coffee Lake is expected to be Intel's last architecture that will be based on Intel's 14nm process node.

You can join the discussion on Intel's Coffee Lake architecture on the OC3D Forums.

AngryGoldfish
August, eh? I feel really sorry for Kaby Lake guys. Not that they have a 'bad' CPU or anything, and in fat they may not be feeling sorry for themselves and are quite contented, but I know if I had bought a 7600K or a 7700K six months ago, I'd be peeved right about now.Quote

Avet
AMD really did stir the pot. Intel, and Nvidia are really annoying customers with rushed releases. Buy or not to buy...Quote

TheF34RChannel
Nice Mark! You could expand the article by including the CFL-H part entry I left in quick news last night (6/12, 9MB L3). Also, respectable rumor has it that CFL requires LGA 1151 v2 sockets, making it impossible for previous sockets to work with these CPUs.

I'll be happily picking up the 6/12 -S part and a new Strix/TUF Mark 2 board (haven't decided yet). Now bring on the leaks and database entries dear internet!Quote

Cbotha15
Yes, this is good news. Might be looking to upgrade from my older i5 4690KQuote

TheF34RChannel
Quote:
It should make for a nice upgrade (treat yourself to the HT part though.)Quote
Reply