Intel is confident that they will retain the gaming crown.

Intel is confident that they will retain the gaming performance crown after the launch of AMD's Ryzen 3rd Generation processors, calling on AMD to "beat us in real-world gaming", at least according to PCPER.

While AMD has achieved higher clock speeds, packed increased IPC and offered larger cache sizes with their Zen 2-based Ryzen 3rd Generation processors, Intel remains convinced that their i9-9900K, or at least their upcoming i9-9900KS processor, will remain the king of the PC gaming market.

Intel has called on AMD to utilise real-world gaming performance data to describe their upcoming processors, rather than rely on benchmarks like Cinebench and tools like Blender to showcase the performance of their processors. Intel argues that these tools do not matter to consumers, but that real-world gaming tests do. Cutting through the marketing spin, Intel wants reviewers to focus on criteria which have highlighted Intel's advantages over AMD's existing Ryzen processors.

Below is a comment from Intel's Jon Carvill, the company's VP of Tech Market Leadership. 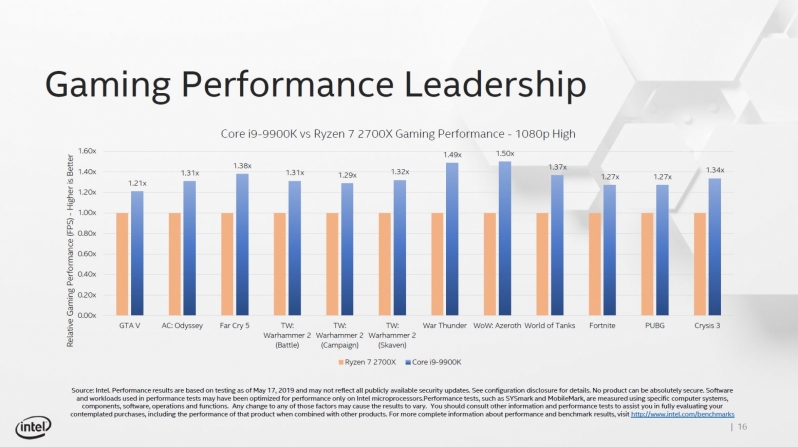 What's worth noting here is that Intel's slide states that their results "may not reflect all publically available security updates" and that "software and workloads used in performance test may have been optimised for performance only on Intel microprocessors", statements that leave us extremely unsatisfied with Intel's performance data. Would Intel's full spectre/meltdown mitigations harm their gaming performance? How has Intel "optimised" this workload for their processors? Put simply, are these results even fair?

Intel has also highlighted the "gaming impact" of PCI Express 4.0, stating that moving from PCIe 3.0 16x to PCIe 3.0 8x delivers an average framerate difference of 0.0099%, alleging that this is a difference that is not worth worrying about. Basically, Intel is belittling the benefits of PCIe 4.0 by saying that PCIe 3.0 x8 is enough for gaming workloads. 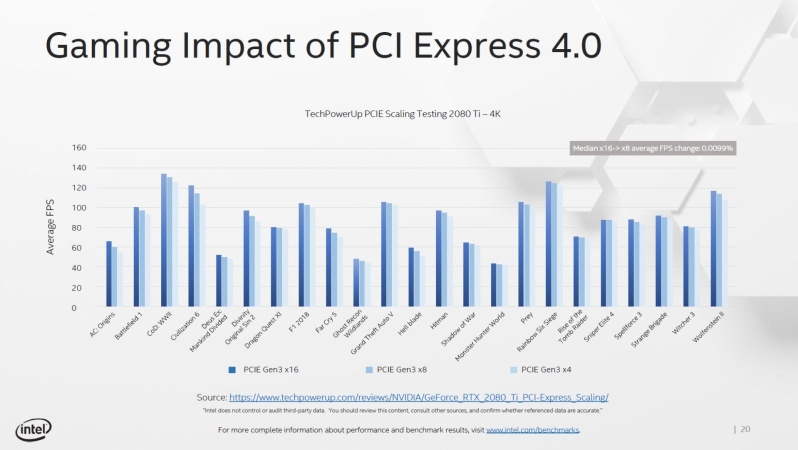 Only time will tell whether or not Intel's confidence is warranted here, as we have not seen the real-world gaming performance of AMD's Ryzen 3rd Generation processors at this time. Only time will tell whether or not Intel was right to be confident, but it is worth noting that there is more to the PC market than gaming, and that simply beating the i9-9900K isn't a judge of who the real gaming champion is. Price/performance ratios will be a critical factor here, and this is a factor where AMD's Ryzen lineup has always excelled.

You can join the discussion on Intel challenging AMD to "beat us" in "real world" gaming on the OC3D Forums.

Gothmoth
AMD: "beat us on performance per dollar".

2560x1440 is the lowest resolution i would even consider buying.


intel milked the customers for a decade (inlcuding myself).
as long as intel does not offer 20% more performance overall, for the same price, i will buy and support AMD.Quote

KingNosser
All Intel have done is shown how worried they are and they should be, Intel match them on price oh wait you can't see how that works

Giggyolly
LOL, that fact is buying a 9900k for 1080 gaming is the most ridiculous thing ever.
So at that resolution you'd really need to look at a lower price point.. sayyy 3600 vs i5-9400. Those are numbers I;d like to see.

demonking
Quote:
This! Today
£250 sent with intel vs £250 spent with AMD. i5 8600(no K and im letting intel off by £5) vs Ryzen 7 2700.
You could argue either way, Intel's CPU is newer and wait till zen 2 drops and then argue that AMD's chip is newer. Either way today, if im buying a CPU for £250 those are my best options from overclockers.Quote
Reply