Rumour has it that Intel plans to launch its first 10nm desktop processors in late 2021, arriving in the form of Alder Lake alongside a new desktop socket, LGA 1700.

Videocardz has managed to grab an image of an upcoming Alder Lake-S series LGA 1700 processor, confirming Intel's plans to ditch their LGA 1200 socket after the launch of Rocket Lake in early 2021. If Alder Lake launches when expected, 2021 is going to be a busy year for Intel.

Intel's Alder Lake-S series is expected to launch with a big-little style CPU architecture, combining up to eight Golden Cove and eight Gracemont cores within a single system to offer an ideal balance between performance, efficiency and battery life.

When compared to Comet Lake, Intel's LGA 1700 Alder Lake-S processor packages are 7.5mm taller and features 500 more pin contacts. These changes alone showcase the complexity of Intel's upcoming desktop processors. In late 2021/early 2022, AMD is also due to move to a new motherboard socket design. With their next-generation Zen 4 processors designs, AMD will likely ditch their existing AM4 socket to enable DDR5 memory support and PCIe 5.0.

If these reports are legitimate, Intel's LGA 1200 socket will have had an extremely short shelf life, especially when compared to AMD's AM4 platform. After the launch of Rocket Lake in early 2020, LGA 1200 may effectively be dead in the water, supporting no upgrade headroom. 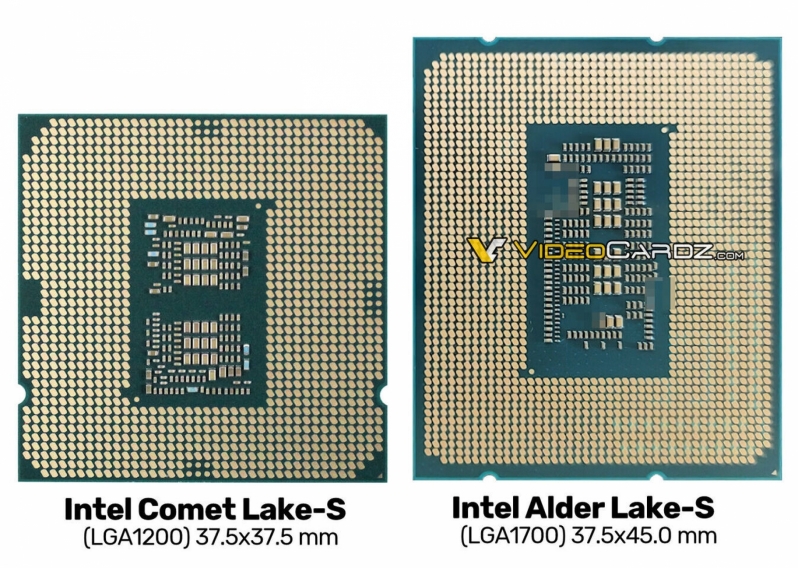 You can join the discussion on Intel's pictured Alder Lake LGA 1700 processor on the OC3D Forums.