Intel accelerates 7nm Plans, 10nm will be a short-lived node

Will Intel succeed with 7nm where they failed with 10nm?

Intel accelerates 7nm Plans, 10nm will be a short-lived node

Process technology was once the feather in Intel's cap, the advantage that the company was once able to flaunt over all others within the silicon manufacturing world. When Intel released products using their 14nm manufacturing process, they were a clear step ahead of their competition, and back in 2013, Intel hoped to maintain that advantage by laying out ambitious plans for their 10nm node.

Intel's plans were a failure, with 14nm coming later than expected to desktop platforms while 10nm delayed from late 2015 to 2019. Yes, Intel released some 10nm Cannonlake mobile processors in 2017, but they were in such low volumes that Intel no longer acknowledges those products within their product roadmap. In some ways, 10nm's delays are a stain that Intel would prefer to erase from their history.

So what was the problem? An overly ambitious design? Mismanagement? Overconfidence? All of these could be considered factors that contributed to 10nm's delays. It is worth noting that Intel's 10nm is said to be competitive with TSMC's 7nm in terms of size, and that node has only recently started shipping in large volumes. Had Intel released 10nm on time, they would have been years ahead of their competition, which in the world of cutting-edge physics is becoming an increasingly difficult task.

Moving forward Intel plans not to let their 10nm woes happen again with future nodes, pledging to accelerate their way to 7nm by 2021, as otherwise, they would risk getting left behind as Samsung and TSMC work on competing 5nm technologies. 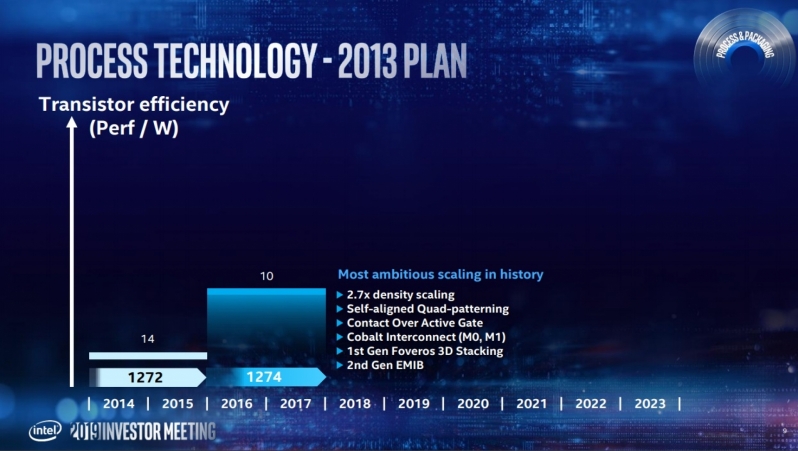 With 10nm's delay, Intel realised that they could take advantage of refined versions of their existing nodes, gaining extra performance and power efficiency by using enhanced 14nm-class nodes such as 14nm Plus and 14nm Plus Plus. With 10nm, Intel plans on using the same methods to get the best performance out of their 10nm and 7nm process nodes, which should ensure that the company remains as competitive as possible.

When moving to 7nm, Intel's slides indicate that they are aiming for 2x scaling in silicon density and plan to use EUV (Extreme Ultraviolet) technology to do so. Samsung and TSMC are already utilising EUV technology in their enhanced 7nm process nodes, but deeper utilisation is planned for their next-generation 5nm technologies.

What's more significant is that Intel plans to enact a 4x reduction in design rules for their 7nm lithography node, which will make it much easier for the company to execute their designs on the platform. Given the complexities involved in making cutting-edge silicon, the impact of this change will make product design much easier for the engineers involved and will likely allow Intel to be more creative with their products. 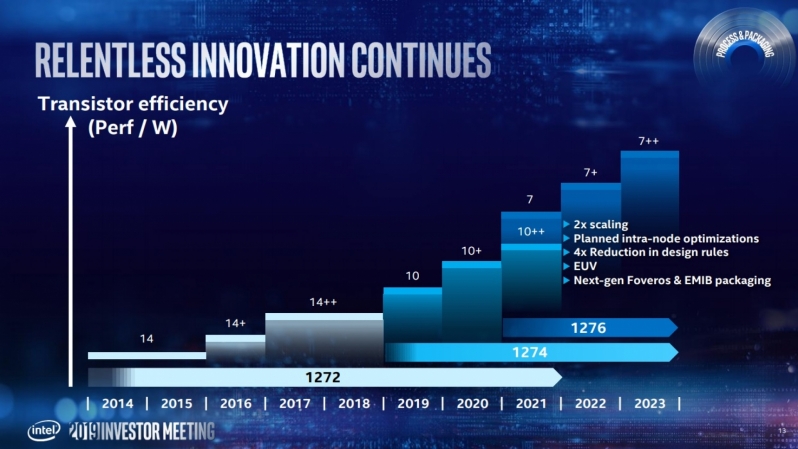 Intel's 10nm silicon will start shipping in June 2019, with the company planning to release 10nm-class products in late 2019 and throughout 2020. 7nm products are expected to release in 2021, with Intel highlighting the node's planned use in a Xe architecture-based GP-GPU, one which will utilise Foveros technology for use in the data centre AI and HPC markets. 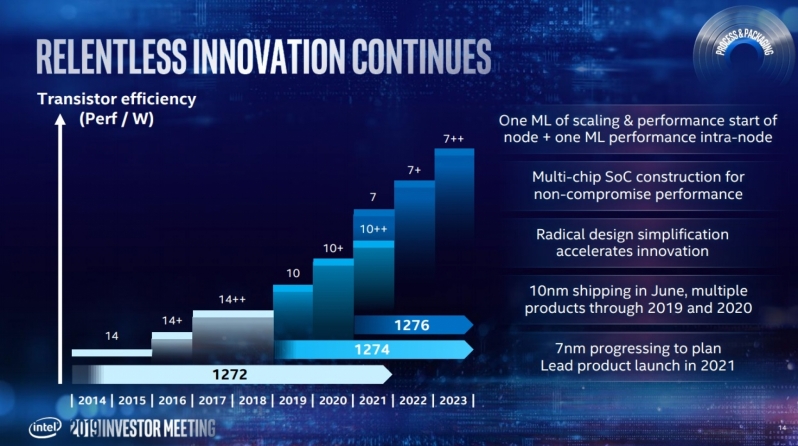 By the time Intel's 7nm process node is ready, TSMC's 5nm node should already be ready to compete against it, with TSMC planning to bring 5nm into risk production in the second half of 2019.

You can join the discussion on Intel's planned acceleration to 7nm on the OC3D Forums.

WillSK
You can smell the panic from here lol!

Avet
Quote:
They are not panicking. We are just not used to hear this much from intel. Few rumors here, and there. AMD is spamming with announcements, and they are releasing Zen 2. This is just so there won't be all AMD stories in the news.

Intel and Nvidia are still dominating. AMD knows that. That is why you see them compete in mid-low tier. Old time news like: "Nvidia releases the world's fastest GPU!" Next week: "AMD GPU beats Nvidia flagship", are long gone.

AlienALX
Quote:
lol for real? you actually believe that?

They hired the guy that designed AMD's Zen to come in and help. They've put millions of dollars down the bog, and AMD Are about to go 7nm on the cheap. And you don't think they are panicking?

I'd hate to see them with real problems

NeverBackDown
If they get to 7nm with EUV technology they will regain the technological lead again.Quote

tgrech
Not on these timescales, TSMC already has EUV in use for four non-critical layers in the 7nm+ node currently entering mass production and arriving to consumers in products in Q3 of this year with the Huwaei Kirin 985 SoC. TSMC 5nm looks to be the first true full EUV mass production node, it's already in risk production and uses EUV across 14 layers for a 45% area reduction, entering mass production in around a year and expected to arrive to consumers around Q3 2020. By the time we reach 2021 TSMC will be on their third generation EUV node, the recently reported 5nm+.Quote
Reply