Some specifications have leaked for Intel's upcoming Skylake platforms and LGA 1151 motherboards, giving us a clearer picture of what Intel is going to release in the coming months.

Curiously Intel has changed their naming scheme for their Skylake CPUs, naming the unlocked i5 and i7 models the i5 6600K and the i7 6700K, instead of the i5 6670K and the 6770K like expected. Another oddity is that AMD has released APUs with similar names over the past few years with Richland, with models called the A8-6600, A10-6700 and the A10-6800K, which could confuse people who are not acquainted with these CPUs.

Interestingly Skylake will support both DDR3 and DDR4 memory types, which will allow users to use their existing DDR3 ram modules or upgrade to DDR4 memory. RAM support will be limited to what motherboard you purchase, as DDR3 and DDR4 are not pin-to-pin compatable. 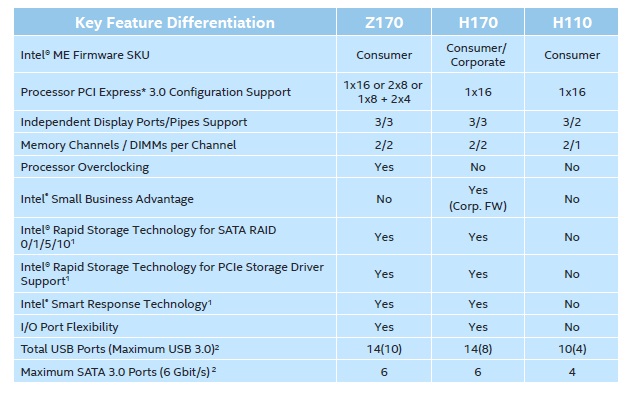 The naming scheme for Intel's motherboards has also changed, instead of cotinuing with their current trends and naming the motherboard tiers Z107, H107 and H101, Intel decided to give them the much more appealing names Z170, H170 and H110 (not sponsored by Corsair).

We also see more differentiation between Intel's Z170 socket and their H170 socket, which instead of being mainly limited to overclocking ability but also PCI Lane usage and USB ports. Intel's limitations to the use of the PCI lanes on Intel's H170 will limit the users ability to use certain NWMe SSDs at their maximum speeds. 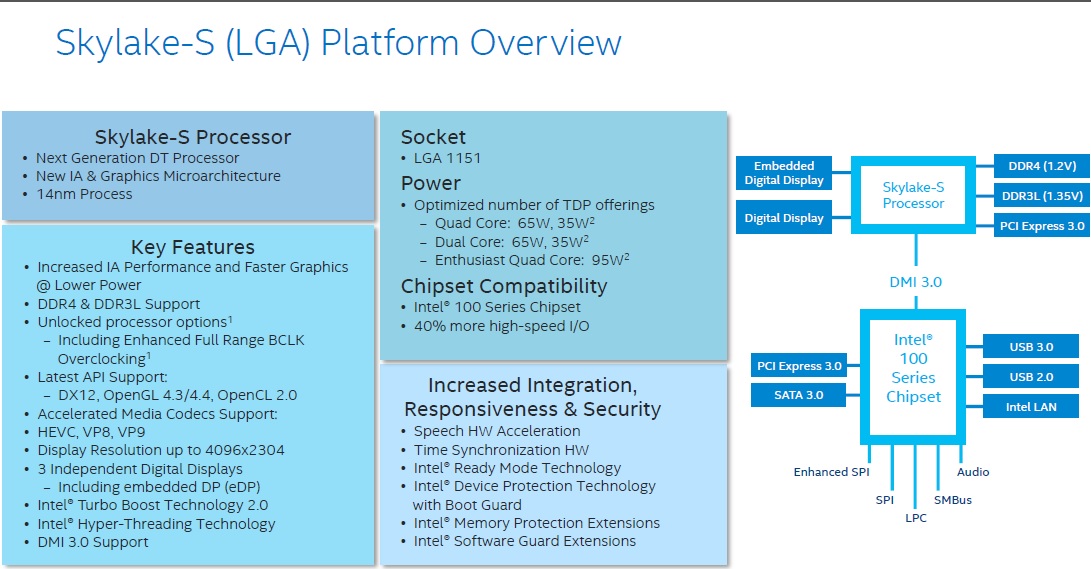 Right now we can only guess at the performance of Intel's Skylake, as it will be a full tick and tock ahead of Haswell, with both big architecture changes and a process node shrink. It is expected that Intel will have a large gain in processor IPC, though until these processors are released and tested we can only guess at the potential performance gains over Haswell.

Skylake is expected to launch later this year and we at OC3D will keep you updated as more information becomes available.

You can join the discussion on Intel's Skylake Processors on the OC3D Forums.

Here are the latest Details on Intel's Skylake and their 1151 Socket. http://t.co/T9CrMziayF pic.twitter.com/AEq1uz9h6L

cemerian
"Including enhanced full range BCLK overclocking" looked interesting, would be nice to be able to overclock every chip with BCLK again not just the k seriesQuote