Intel has a lot of products in the works for late 2018, from their upcoming Coffee Lake-S Refresh to the insane 28-core processor that the company showcased at Computex 2018.

We already know a lot about Intel's upcoming 8-core Coffee Lake series processors, though until now details have been scare regarding the remainder of Intel's desktop lineups, especially on the high-end of the CPU market.

WCCFTECH has managed to get a glimpse of Intel's 2018/19 product roadmap, adding further credence to older leaks which placed the release of 8-core Coffee Lake processors in late Q3 2018 or in early Q4. This leak also states that Intel's next-generation X299 processors will be a Skylake-X refresh and that the company's upcoming 28-core flagship will be based on the company's Skylake-X architecture.

Strangely, Intel's 28-core Skylake-X processor is listed as an A-series part, suggesting that the processor will not be released on today's X299 HEDT motherboard platform and become part of a new product segment with a different chipset and socket. Intel's Computex 2018 prototype used an LGA 3647 socket with six memory channels, further suggesting that Intel's new flagship will not be usable on X299.

The roadmap below also suggests that both Intel's Basin Falls (Skylake-X) Refresh and Coffee Lake-S Refresh processors will both be announced in October 2018, with Coffee Lake-S releasing soon after and Skylake-X refresh releasing in November. Remember that these roadmaps are subject to change, which means that the release timeframes that are listed may not be 100% accurate. 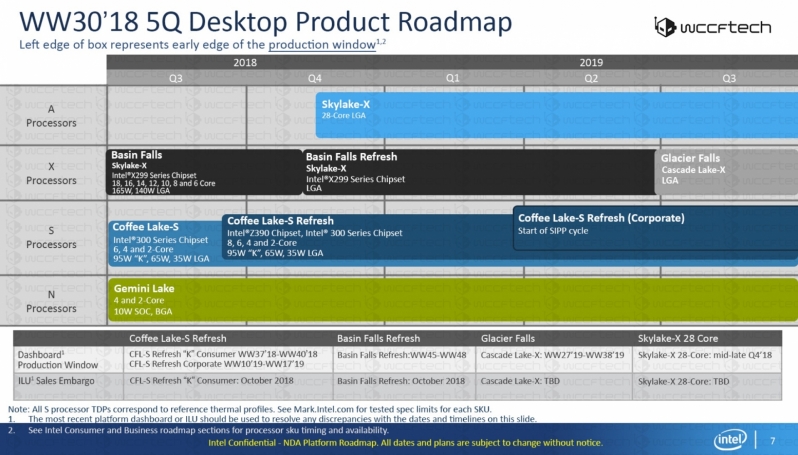 The roadmap above also states that Gemini Lake will not be replaced until Q4 or 2019 or after, likely due to Intel's 10nm delays. Intel needs a new manufacturing process to get more performance out of 10W (or lower) TDP products. If this roadmap is correct, the earliest that we can expect to see Intel 10nm products is Q4 2019.

You can join the discussion on Intel's 2018/2019 product roadmap on the OC3D Forums.

Lawliet
Well, they are not coming out in Q3, the roadmap clearly says, Q3 is just the start of production. They might be available in Q4.Quote
Reply