No. This isn't Comet Lake

Intel has a new 10-core processor that's due to launch next month, the i9-10900X. No, this isn't Comet Lake, as some other sites have reported, but part of Intel's upcoming Cascade Lake-X lineup, which will release as part of the company's X299 refresh.

When compared to the i9-9900X, the i9-10900X will release with the same core/thread count of 10/20 and is rumoured to offer users higher base/boost clock speeds. This clock speed increase comes due to Intel's latest 14nm node refinements and through Intel's refined Cascade Lake-X core design, which is an enhanced version of Skylake-X.

With Cascade Lake-X, Intel has promised more performance per dollar than Skylake-X, which means that Intel plans to offer both increased performance and higher core counts for your money with their 10th generation hardware. This means that Intel's i9-10900X will likely cost well under £1,000, bringing their X299 lineup into tighter competition with both Ryzen 3rd Gen and 2nd Generation Threadripper.

Like Skylake-X, Cascade Lake-X will release on Intel's X299 socket, making it compatible with a wide range of existing X299 motherboards through upcoming BIOS updates. New X299 motherboards are also on the way from most major mainboard manufacturers. 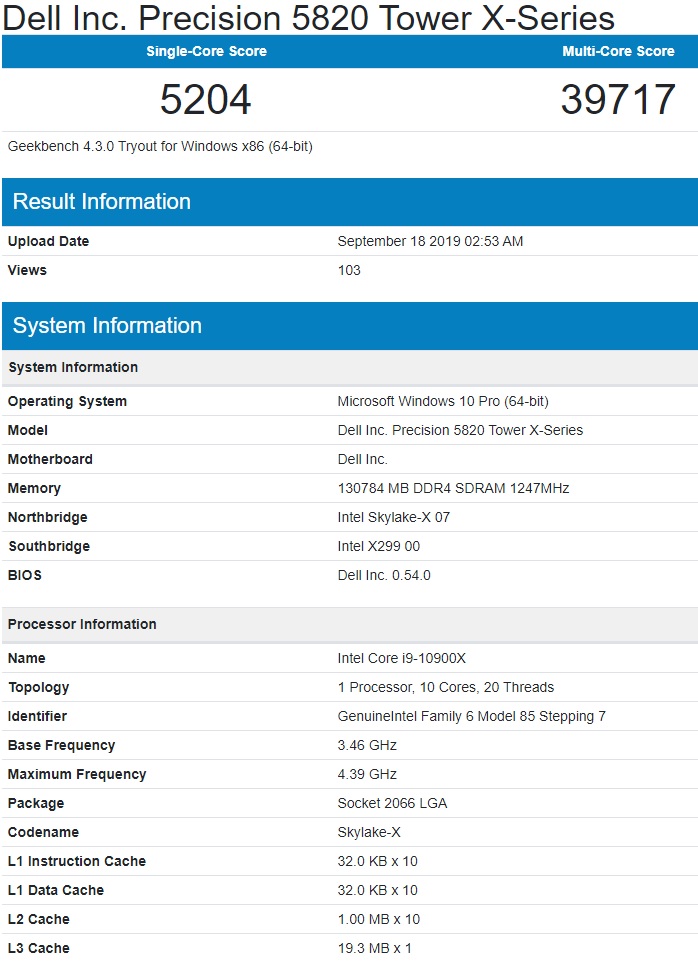 (Image from Geekbench Via Momomo_us )

You can join the discussion on Intel's i9-10900X processor on the OC3D Forums.

demonking
I feel hugely underwhelmed by this leak.
2920x 12 core 24 thread, 4.3 boost, 32mb cache and just over £550 atm.
Have I missed something? New TR4 skus are about to drop and I expect these to be a worthy upgrade to second gen let alone these. How aggressive are they planning on being with their pricing?Quote

WYP
Quote:
They say they are going to be 75-109% better value than their last-gen offerings. The long and short of it is that Intel is lowering its prices for their new SKUs.