Core X is back and they are soldered!

It has been a while since Intel released their last X-series processor, so much so that the company has decided to jump from their 7th Generation immediately to their 9th generation, delivering some noteworthy design changes that will suit both pro-users and overclockers alike.

Strangely, Intel failed to confirm that core architecture that is used to build their latest 9th Generation processors, leaving many to expect that Intel's 9th Generation X-series processors are a refresh of Skylake-X, offering increased base/boost clock speeds and the same maximum core/thread count of 18/36.

One of the most noteworthy enhancements in Intel's 9th Generation X-series processors is their use of "Solder Tim", which offers users increased overclocking headroom thanks to improved heat dissipation. &th Generation processors often needed to be delidded to achieve their peak overclocking potential, a flaw which Intel's 9th generation models will mitigate.

Intel didn't confirm whether or not these new processors would be supported on their existing X299 motherboard platform, though they are expected to be using the company's LGA-2066 socket. Below are the specifications of Intel's upcoming 9th Generation X-series lineup. 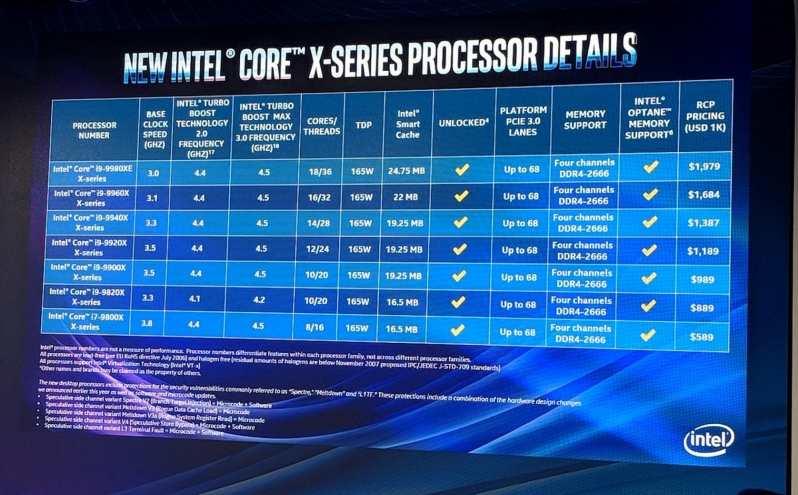 With their 9th Generation X-series processors, Intel has decided to drop all sub-8-core options from their lineup, allowing Intel's Coffee Lake lineup to fill that segment of the market. Intel's 9th Generation processors will all offer up to 68 PCIe 3.0 platform lanes, removing the segmentation that the X-series is typically known for. This move is an obvious response to AMD's Threadripper series of processors, which offers 64 PCIe platform lanes with all processor SKUs.

Intel's Core X-series processors are expected to release this November.

You can join the discussion on Intel's 9th Generation Core X-series processors on the OC3D Forums.

AngryGoldfish
This is more like what we should have seen last year, or maybe even the year before that. At least there's no four or six core CPU's. Prices are so too damn high though. And I just heard that there's going to be an 'Ultra HEDT' CPU now, the 28c that was showcased in all its freezer glory earlier this year. Segmentation, brah! It's soooo rad.Quote

smilertoo
It looks like intel are going to skip lane crippling etc on this cpu, i'd still like to see AMD rewarded though with better sales.Quote

AlienALX
Still monolithic. I bet these are going to be expensive.

Giggyolly
To be honest, I was expecting them to just start repackaging their Xeons as X seriesQuote
Reply