In a recent interview Globalfoundries' Chief Technical Officer, Gary Patton, has expressed a lot of confidence regarding the company's new 7nm manufacturing process, quoting a considerable performance increase of 40% and an area reduction of over 50%.

When speaking to Anandtech, Patton is quoted as saying that their 7nm process should be able to reach clock speeds in the 5GHz range, which if accurate means big things for the node, and users of this node like AMD and other partners. While this does not guarantee that Zen 2/ Ryzen 3000 will be able to run at 5GHz, this confidence in 7nm does point towards great things for AMD, especially when combined with planned architectural changes.

Q17: Does the first generation of 7LP target higher frequency clocks than 14LPP?

GP: Definitely. It is a big performance boost - we quoted around 40%. I don't know how that exactly will translate into frequency, but I would guess that it should be able to get up in the 5GHz range, I would expect

AMD is currently using Globalfoundries t create their new Ryzen 2nd Generation processors on their 12nm production node, a manufacturing process that is designed to offer increased performance and transistor density, offering boosts of 10% and 15% respectively. In effect, this is an optimised 14nm with improvements to key areas, rather than an optical shrink like the move to 7nm.

Increases in transistor density will allow companies like AMD to fit more transistors into a particular die size or decrease the die size of their product.  This change enables them to either insert more or larger features/cores into their products or shrink their product to fit more dies onto a single wafer, making each chip cheaper to manufacture. 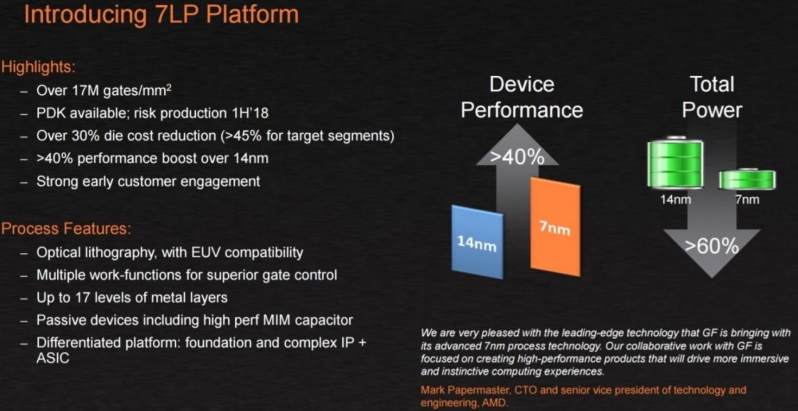 The delays of Intel's 10nm manufacturing process have allowed their competitors to catch up, creating a situation where Intel can no longer rely on their foundry advantage in the desktop CPU market moving forward. This market shift will allow AMD's Zen 2 designs sit on a level playing field with Intel, at least in terms of manufacturing technology, making 2019 another exciting year for the CPU market.

You can join the discussion on GlobalFoundries' upcoming 7nm manufacturing technology on the OC3D Forums.

tannji
This could be the biggest game changer since Thunderbird and A64. Or not. 40% over Ryzen is a mighty ballsy statement, but they made the same projection for Ryzen and exceeded it considerably. Can't wait to see how this shakes out.Quote

WYP
Quote:
Note that this is 40% over 14nm, not Ryzen. These scaling levels may not apply perfectly to AMD's Ryzen 2 design. AMD needs to make good use of the process to get these advantages.Quote

RobM
Ryzen is 14nm with next months being 12nm so I would say this is 40% uplift to ryzen 1.
Regardless, the prospect looks really goodQuote
Reply