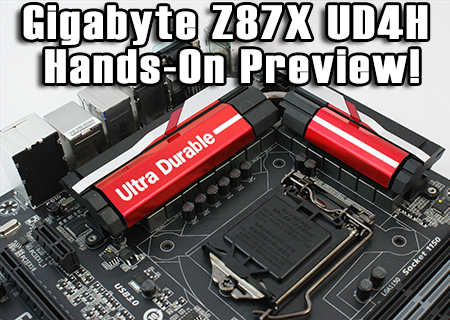 Today we give a quick once over to the Gigabyte Z87X UD4H, which is soon to be released. Looking at the past, the UD4 boards have been Gigabyte's mid-range performance motherboards, settling itself rather logically between the UD3 and the UD5. However, in the history of all things UD4, nothing's looked quite as good as this.

Last generation's boards bucked the trend when it came to overclocking performance with price in mind, with boards in the £150 range beating those with a greater price tag. We can only hope that this happens with this board, just so that it gets the power as well as the looks. Only time will tell, but the board is already promising in our eyes.

Once again, let's take a look at some photos of the board before we get to the video. 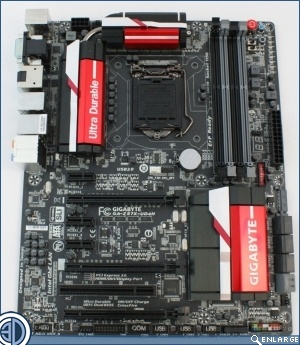 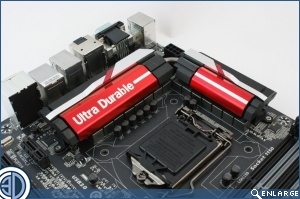 A close up of the VRM heatsinks show even more good looks. 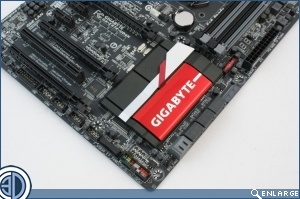 The first board that we've seen today which includes a PCI lane along with PCIe.

Oh me, oh my. If you haven't already caught on from the rest of this article, we're totally infatuated with the looks of this thing. Red and black is a new colour scheme for Gigabyte, and might we say that they've pulled it off flawlessly. The heatsinks show off their simplicity well, with no added logos or badges in the way of the sleek aesthetics.

Gravitating away from its looks towards what the board has to offer in terms of PCIe lanes, we see something different from the other boards we've covered recently - a PCI lane! Good for those of you who still rock older components; the PCI lane will still be good for many sound cards and, if you really wanted to, a video card. Moving on to the PCIe lanes we have three full sized lanes which are wired as 16x, 8x, and 4x, along with two 1x lanes. We have to be very clear here - we do not know yet how the chipset is going to use these lanes, as that's still covered under Intel's NDA.

This board, as it is a lower end item compared to the Snipers, does not benefit from the upgraded audio circuitry. It still offers its own onboard HD audio solution, but it won't be up to par with the others in terms of quality sound reproduction. This is most likely done to cut costs for the mid-range board, but it's still a shame that it's missing.

All together we can see this board being hugely popular among end users. Its breathtaking looks paired with what we hope to be great performance and price will set it up to be one of the top sellers in our eyes, and we really can't wait to see it being put into rigs after release.

A big thanks to Gigabyte for sending us this board for our hands-on preview. Discuss this topic further in the OC3D Forums.

SieB
I don't like the look of the ROG boards because of there being to much red on them. Gigabyte has got the balance of red and black just right on this board though, looks great.Quote

Spiderz
Gigabyte must have someone new in the aesthetics department who told them to ditch the blue PCB. Black PCB with minimalist designed heatsinks everywhere and I'm loving it from them. Hope the performance matches up with the looks.Quote

Chuckers
This really does look fantastic, as SieB said, the balance of Red and Black is perfect.

Black PCB's are the way forward.Quote

garih
Great looking board. I personally don't think it is an issue that the on board sound is not amazing. Most people who care about that don't mind having a decent card in there anyway.Quote

Hmm I really don't like the grey ram slots.Quote
Reply