The board itself ships with support for both AMD's 1st and 2nd Generation Ryzen processors as well as AMD's Ryzen + Vega APUs, utilising a 4+2 phase power array to do so. APU users will be glad to know that this motherboard supports both DisplayPort 1.2 (x1) and HDMI 2.0 (x2) with support HDCP 2.2. The board also support up to there displays simultaneously.

Another perk on this motherboard is integrated WiFi connectivity, which supports 802.11a/b/c/n/ac and frequencies of 2.4/5GHz alongside Bluetooth 5.0. Alternatively, users of Gigabyte's B450i Aorus Pro WiFi can also use its integrated Intel GbE LAN port.

Like all modern MITX motherboards, the Aorus B450i supports a single PCIe 3.0 16x slot, allowing users to connect a high-end graphics card to their system with ease. A single M.2 slot is also available, which supports both SATA and NVMe (x2 and x4) SSDs. M.2 cards up to 80mm in length are supported, with Gigabyte providing an Aorus branded heatsink to assist in SSD cooling. 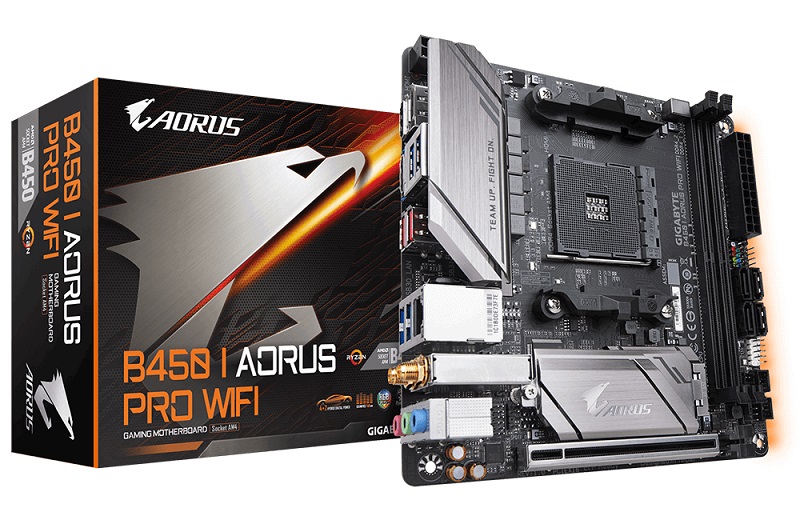 The board ships with four SATA connections, which will be enough for most modern system builders, especially within ultra-compact ITX cases. On the rear I/O, the board also supports dual USB 3.1 Gen 2 ports (both Type-A) and four USB 3.1 Gen 1 ports.

At this time the pricing and regional availability of this motherboard are unknown.

You can join the discussion on Gigabyte's B450i Aorus Pro WiFi motherboard on the OC3D Forums.

Daiyus
That's got to be the nicest looking mITX board I've seen in a long time.Quote

To bad it's a gigabyte board.Quote

Dawelio
Quote:
Quote:
Haha I totally agree with both of you guys.

And yet again, that weird broken jaw bird, that is the Aurous logo, is just ugly as the blackest hole and just ruins it.Quote

AlienALX
Quote:
D'you know that is exactly what I thought when I saw it. That really is lovely.Quote
Reply