Gigabyte launches a trio of X299X motherboards for Cascade Lake-X

Gigabyte launches a trio of X299X motherboards for Cascade Lake-X

Intel's Cascade Lake-X CPU lineup is not set to be transformative on the performance front, but then it comes to both pricing and platform features, Cascade Lake-X is set to be a gamechanger.

This motherboard features support for up to 256GB of DDR4 memory when used with Cascade Lake-X processors at speeds of up to 2933MHz without overclocking. To power the user's processor, this motherboard uses a 12-phase IR Digital VRM solution with 70A power stages.

Moving down to the low-end, we have the X299X Aorus Master, which also supports up to 256GB of DDR4 memory. While this board lacks Thunderbolt 3.0 support (without the addition of an Add-in card), the Aorus Master does contain support for Intel WiFi 6 and support for 5GbE through an Aquantia LAN controller. The motherboard also supports standard Gb ethernet using an extra LAN port. This board also offers users a 12-phase VRM and three PCIe 3.0 M.2 slots and a total of eight SATA connections. 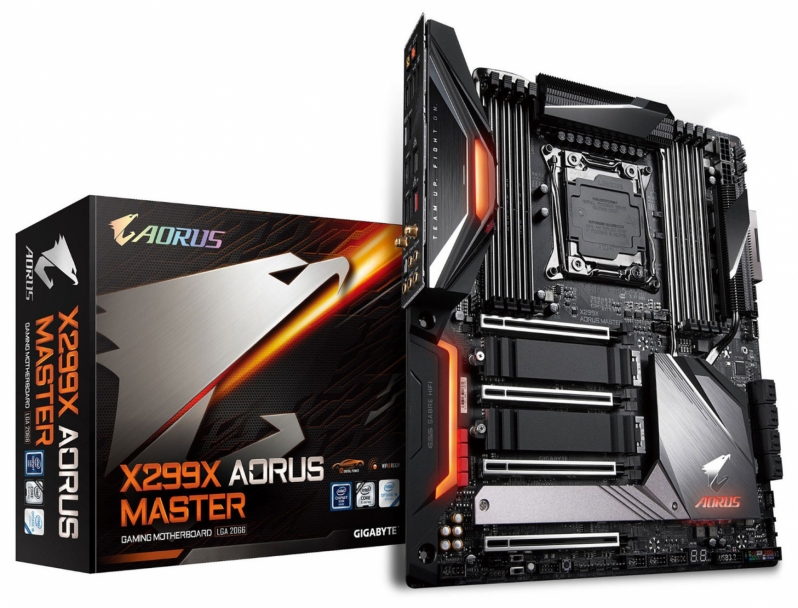 Those who desire insanity-tier hardware will want Gigabyte's X299X Aorus Extreme Waterforce, which ships with a dedicated CPU/motherboard VRM water block, a 16-phase VRM design, and integrated Thunderbolt 3 and 10GbE. This board also ships with an additional GbE connection, twin M.2 slots, and a 4x M.2 add-on card.

More information about each of Gigabyte's new X299X series motherboards is available on Gigabyte's website. Links to each motherboard are below.

You can join the discussion on Gigabyte's new Cascade Lake-X ready X299X motherboards on the OC3D Forums.

AlienALX
Do these chips run on X299 boards?Quote

Avet
Quote:
The board has Thunderbolt 3 support it is just not integrated. There is a TB3 add-in card connector.

WYP
Quote:
I have edited the article to mention that it supports Thunderbolt 3 when an add-in card is connected. Even so, the board lacks integrated support for Thunderbolt out of the box and it should not be considered as a default feature.

I doubt many PC builders would spend the £80ish required for a Thunderbolt add-on card.Quote

Avet
Quote:
Actually it should be considered a more premium feature. I have looked at manuals that have block diagrams. Both Designare and Xtreme have Thunderbolt connected through PCH. Designare even has X550-AT2 added on PCH. That is 60 Gb/s through DMI 3.0... What a joke. And that doesn't include all the USBs, SATA, and pretty much everything else on the motherboard. Having Thunderbolt AIC through proper CPU lanes is much better. And the price usually evens out. Designare ~ MASTER + AIC.Quote
Reply