As far as the Z87 motherboards go, we regard the Gigabyte ranges as some of the best around. Their boards cover all the bases from the high end Gigabyte G1 Sniper 5, to the budget Z87-D3PH, with one of our favourites right in the middle; the Z87X-UD4H. As far as Micro ATX boards are concerned, the Gigabyte G1 Sniper M5 is a brilliant choice too, with its amazing price, great looks and staggering performance.

Gigabyte have recently released the next in the ‘Sniper’ series; the G1.Sniper Z87. Aimed at gamers, this packs an unbelievable amount of features considering the price of only £116! 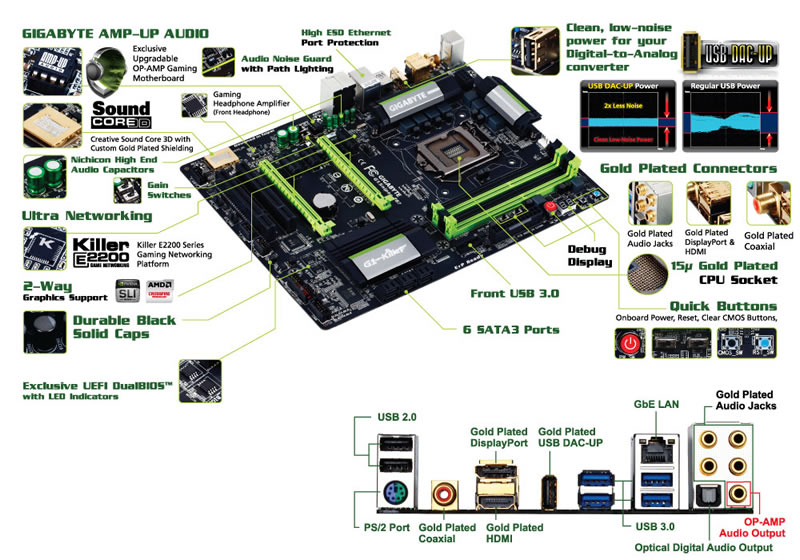 All in all, we think this is one of the best value products on the market at this moment in time. For the £116 Gigabyte ask for, you’re getting a higher end onboard soundcard than standard motherboard, support for SLI and Crossfire, a beautiful looking matte black PCB and a great overclocking experience.

The G1.Sniper Z87’s target market is gamers, and Gigabyte has taken the effort to improve the areas gamers use most. The audio system is powered by the Creative Sound Core 3d chip, which means audio will be high quality without having to add an expensive soundcard. If that isn’t enough, Gigabyte have also added an upgradeable OP-Amp system which enables the user to power higher end headphones/headsets directly from the board. Here at OC3D, we love having high quality sound from our PCs, whether it’s for hearing every beat in a piece of music, or perfectly positioning enemy footsteps in your favourite FPS game. With the G1.Sniper Z87, Gigabyte has you covered.

The G1.Sniper also comes with a Killer E2200 NIC, which is regarded by gamers as one of the best internet solutions for avoiding lag, and getting the most out of your games. In a board as cheap as this, we really think it’s amazing to see how much Gigabyte have given you.

The Gigabyte GA-Z87X-UD3H, which we also thought was a great value board, comes in at around £140. The G1.Sniper has almost as many features when it comes to PCIE lanes, USB and SATA connectivity, and an even better specification in the areas such as audio and networking. We are bewildered how Gigabyte has managed to pull off such a high end board, and at such an affordable price. Buy the G1.Sniper Z87, coupled with an Intel 4670k and a Gigabyte 760 Windforce with the black PCB, you could have an incredibly good looking, high performing system for an awesome price!

Full review will be up ASAP but we are really looking forward to testing this one, discuss your thoughts in the OC3D Forums.

maniac
When I opened the video, I thought it was a review and I was like :O wtf? only 11 minutes? then I was like ohhh its an 11 minute first look

Wraith
Hopefully with AMD stating that they will continue the AM3+ platform into 2015 we may just get to see the AM3+ incarnation, I know when I spoke to Gigabyte they were all hush hush about it... so fingers crossed.Quote

chrismjurd
hopefully its within 95% of the raw performance of the bigger brothers, and signalling the end of mid level boards in the 150+ price bracket, especially for intel based boards.

so whats really missing, sure a couple of sata connections, meh

i guess it all comes down the the overclocking potential.. hopefully its decent. cant wait for the following review.Quote

NeverBackDown
for that price is sort of makes my Gd55 z77 board look like crap in both looks and price...