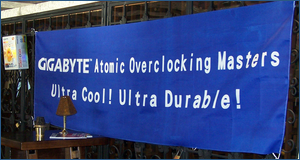 Last week I received an invitation to a closed viewing of Gigabyte' Ultra Durable 2 X38 DQ6 motherboard which also doubled as an Overclocking Masters Competition/exhibition at Bubble's Champagne Cocktail Lounge in Circular Quay, Sydney. This was an exclusive event to say the least featuring both 'cream-of-the-crop' and up and coming talent of the Australian overclocking scene. The competition was to act as a precursory event for selection to next years WCG championships. The Gigabyte Atomic Overclocking Masters was run courtesy of Atomic Magazine and their respective forum, and was endorsed exclusively by Gigabyte.

So without further delay let's get down to the good stuff...

Welcome to sunny Sydney. Currently it is the most populous city in Australia, with a metropolitan area population of some 4.28 million people. Sydney is a major international tourist destination notable for its beaches and twin landmarks: the Sydney Opera House and the Harbour Bridge. Please excuse my quick Photoshop panorama of Circular Quay. 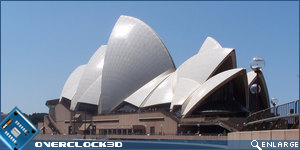 As I said at the beginning of this article the Gigabyte Atomic Overclocking Masters Competition had a healthy representation of Australian overclocking talent. Present and competing were 3 members of Team Australia. 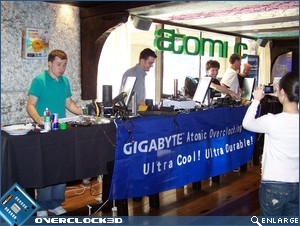 James Turnbull - An up and coming young overclocker who already has WR's under his belt.

Up for grabs were lots of nice goodies from Gigabyte including 8800GTS (340MB) graphics cards, Gigabyte Mercury cases and X38 DQ6 motherboards. 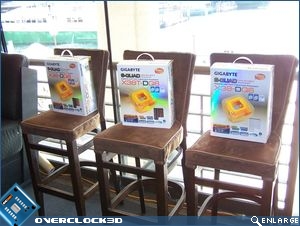 (Gigabyte GA-X38-DQ6 motherboards)
The competition itself was held in two categories: the fastest Super-Pi time and highest 3DMARK06 score. Due to time constraints the competitors were only allowed an hour for each of the categories...phew talk about pressure! 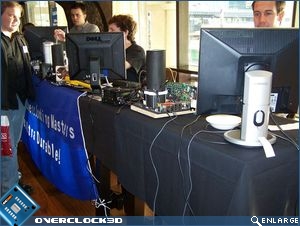 (Setting up ready for Super-Pi) 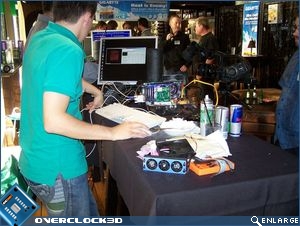 (James a.k.a youngpro pushing for a high 3DMark06 score) 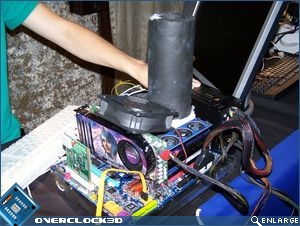 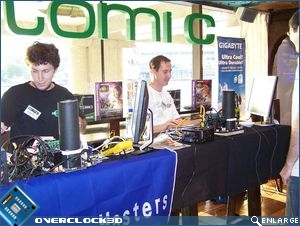 (Josh and Kayl goofing around) 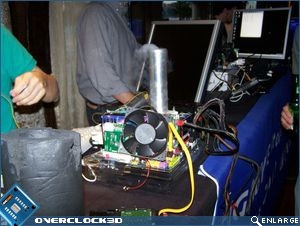 Some of the competitiors were having trouble getting decent temps with dice, so a quick trip to the chemist was in required to purchase some nail polish remover. For those who don't know, nail polish remover (or acetone as it is more commonly known) is used to increase the contact surface area between the inner base of the copper pot and the dry ice. But really any alcohol with a low freezing point will do.

At the conclusion of the competition the winners were announced:

I was actually banking on a higher 3DMARK06 score, but considering that the competitors were using stock cooling on the 8800 GTS', and it was about 30 deg Celcius on the day I'm not surprised. Given a longer period of time and the opportunity to run dice pots on the graphics cards, I'm sure the result would have been significantly higher.

Although the Gigabyte Atomic Overclocking Competition was a lot of fun, I really wanted the opportunity to see Gigabyte' GA-X38-DQ6 up close and personal. During the half-time break we were given a Power Point presentation on the features of Gigabyte' new motherboard and how it would shape up for PC enthusiasts and overclockers alike.

Follow with me onto the next page where you can see just how much work Gigabyte have put into their X38 based motherboards...
«Prev 1 2 Next»

mrapoc
is there any reasons for not going with this board?Quote

FarFarAway
Quote:
A LOT of memory issues with the board and a few people having random issues with it too. It can only improve over time though so fingers crossed Gigabyte step up

JN
And to be honest i'm very surprised at this result considering the DQ6 had the WORST fsb overclock records when it was released.