Scammers are an unfortunate fact of life in today's society, either hoping to pass off a sub-par product as something premium or selling merchandise under a false name to generate some additional income.

Fake CPUs and Fake GPUs are relatively easy to find online, especially fake GPUs, but when these sub-standard products start to ship at high-profile retailers, it becomes a story that should have the industry at large concerned. If Amazon can send you a false product, it harms consumer trust in online retailers, which is something that shouldn't be the case for a company that large and powerful.

Last month, a report brought to light the that Amazon Spain sent a purchaser a fake Intel i9-9900K processor (Tweet here), a CPU that was, in fact, an Intel Core 2 Duo with a modified heat spreader, shipping with the markings and model numbers of Intel's consumer flagship while lacking motherboard compatibility and any of the correct specifications.

While the user thought that the scammer switched the IHS (Integrated Heat Spreaders) of the old and new processors, in actuality his fake i9-9900K is just a Core 2 Duo generation product with a modified heat spreader. No i9-9900K processors were dellided during the construction of this fake.

How was this fake given to Amazon? Simple, the scammer likely purchased an i9-9900K, replace the processor with his faked CPU and returned the package to Amazon. Amazon employees, who probably know nothing about PC components, would look at the CPU and see that it says i9-9900K and think that the processor is the original. This fake product is then sold to a new customer, who pays full price for an unusable product. 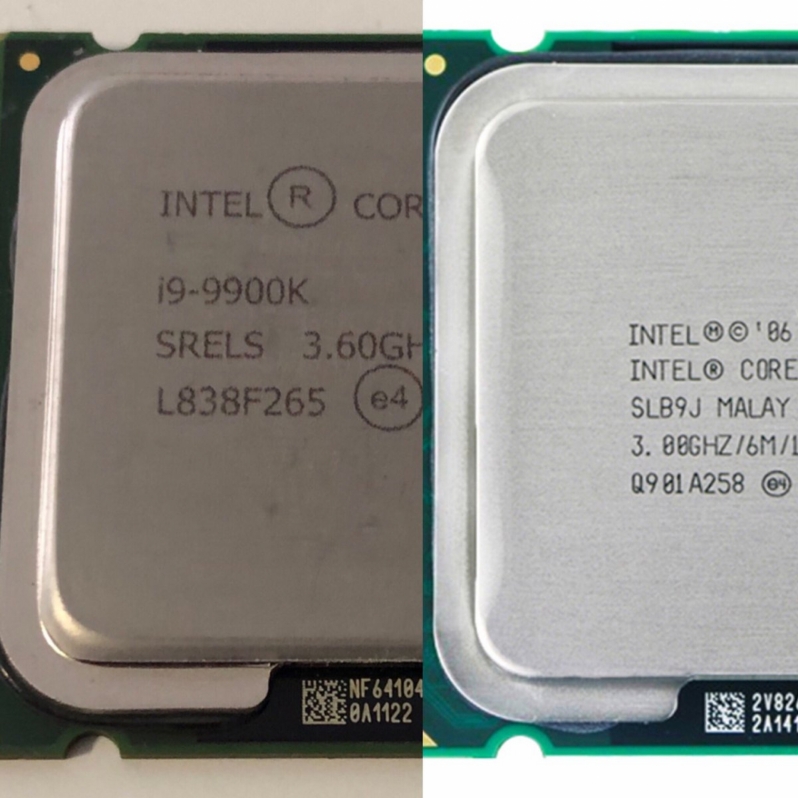 This problem isn't new for retailers. We reported back in 2015 about a similar issue with AMD products, with Athlon 64 X2 5200+ processors masquerading as AMD's newer FM2+ series APUs.

To address this problem, Amazon needs to take additional care when receiving returns for PC components, as who can consumers trust if they cannot rely on the world's largest online retailer?

You can join the discussion on Fake Intel CPUs being in circulation on the OC3D Forums.

demonking
Not surprised, I hope this keeps happening and costs amazon a fortune. Perhaps then they'll realise that some corners should not be cutQuote

Moral of the story, do not buy from open box Amazon CPU's. What seemed to happen was the 3rd party seller purchased from Amazon a bulk amount of returned items and he was reselling them, he had no idea and probably was the looser in this case as he took the CPU back.Quote

Warchild
Quote:
So what happens when you reply with your findings? Do they sometimes accuse you of making the swap?

Always wondered this when something is sent into a local specialist to resolve.Quote

looz
If they do, you escalate to Amazon.Quote

Warchild
Quote:
Doesn't have to be just Amazon. Fake CPUs can come from a multiple of sources. Im talking if you are running an SMB, and a customer comes to you paying for a delidding service.

You delid and see the the CPU is not what the customer thought. Out of honesty you reply to the customer with your findings, but suddenly, they then accuse you of making the swap. Wonder what happens next.

Or worse case scenario is the service technician is in an autonomous mind set and does the delid without thinking, (especially if you have 100s to do) but the customer returns a few days later with the accusation that they sent a 9900k in for delid, but got a duo core back with a 9900k IHS.Quote
Reply