Won the lottery? EVGA have the answer... 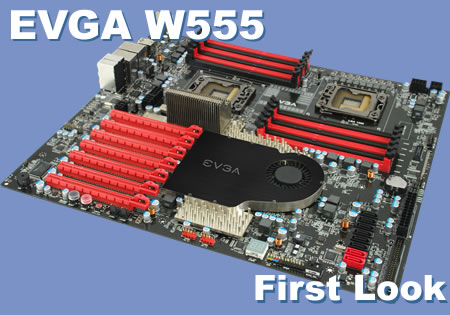 For those of you who follow the hardware industry you'll have been interested in a few blurry pictures that snuck out of the Consumer Electronic Show recently, suggesting that EVGA were working on some behemoth of a board.

Imagine our joy this morning when we opened the inbox and found EVGA had kindly sent us a few high resolution pictures of their latest creation and it proved to be everything we hoped for and quite a bit more.

If you are one of the readers who don't really keep up with what's going on you must have wondered why we'd chosen to mirror the front-page image to make it look as if this motherboard had two CPU sockets. Wonder no more.

Although information about this is sketchy we shall do our best to let you know all that we know. Because this clearly has so much power than Thor is going to be jealous.

Listening closely I can hear "enough introduction, is that really what it looks like? Tell us!". So let's get down and dirty.

This isn't your Dads mATX.

Hells teeth this looks huge. We've spent some time pouring over the pictures trying to work out some rough dimensions and we've come to the conclusion that this is probably 3 inches wider than a ATX board. We've long wondered with so many people willing to spend inordinate amounts of money on getting the absolute greatest performance possible why manufacturers don't break the mould somewhat and cram as much as they can on, so it is good to see EVGA clearly pushing the boat out in ever department.

The first thing that strikes you, the part that is impossible to ignore, is the dual LGA1366 sockets. Dual socket motherboards aren't particularly new as anyone who invested in a Skulltrail will testify. But dual LGA1366 sockets in a motherboard that is designed for overclocking rather than pure server use is something else entirely. The Skulltrail suffered from obscure RAM whereas the W555 will utilise standard DDR3. 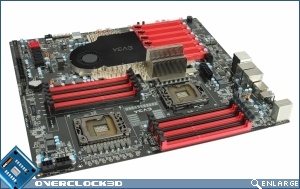 Core i7 processors aren't designed to work in tandem though, so to really get the best out of this you'll need to invest in some Xeons. Xeons are happiest using ECC RAM as opposed to the unbuffered type we all use in our desktops. This is more expensive and only available in slower speeds. Thankfully Xeons have got the controller necessary to take advantage of RAM that runs at a brisker pace. 12 slots available and 4GB sticks for the right price. 48GB anyone? Sure it's way beyond what you'd ever possibly need and by the time you do need it technology will have moved along, but this clearly isn't a board for the timid or value-conscious.

There is one thing that cannot be denied and that is the attractiveness of the colour-scheme used. Black and red has always worked well together since the early 1930s Hot Rods and still works well in a 2010 technological show-piece. 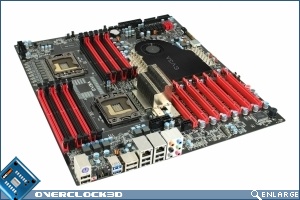 7 PCIe slots instantly springs Quad-SLI and Quadfire to the mind of all of us and so it will come as no surprise to know that the EVGA W555 is rumoured to come equipped with a pair of nForce 200 controllers giving masses of bandwidth. How that will be spread across the multiple PCI lanes has yet to be established but even if with all four populated you only achieve 8x, that's still going to easily annihilate most graphics benchmark world records. No weedy PCIx1 slots here.

Looking above the PCIe slots you'll notice two of the three 6-pin power connectors on the board, the other being at the top of the picture. Next to these are the two 8-pin CPU power sockets. Certainly if the amount of connectors is anything to go by then this is most likely to either require the beefiest power supply yet seen or, more than likely, a pair working in tandem.

Whilst we're looking at this side of the board it's surprising to note that for a platform that clearly tears up the rulebook, sets it on fire and grinds the ashes to a fine paste, the I/O panel on the rear is incredibly standard. It looks no different from any other motherboard that we've seen lately. So whilst it's possible you might need to invest in a bespoke case to house this monster, you certainly wont need to fabricate a backplate shield. 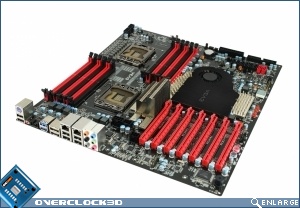 Finally it's nearly impossible to ignore the enormous heatsink and fan combination that dominates the lower quarter of the board. It's under this that the n200 chips and x58 chipset reside. Below this we can see two USB headers, which like the rear-panel comes as a shock to not see three or more, especially as space isn't limited. Moving to the right is a 7 segment diagnostic display which is becoming common on a lot of boards now but is nearly vital on one with 12 RAM slots.

Interestingly to the right of the front-panel header is a BIOS selector switch. Dual-BIOS motherboards are quite commonplace since their introduction a few years ago, but rarely is there a hard-switch on the motherboard that actually allows the user to manually decide which one to use. A definite thumbs up for this one.

To the right of those are 8 SATA ports and one faithful IDE socket. Two of the SATA ports being coloured red makes us wonder if these are solely part of an alternate controller or if they are, as we'd expect, the 6GB/s SATA ports slowly making their way to the market. 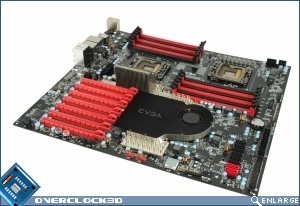 A look underneath shows hard-mounted backplates on the CPU with mounting points already included, which is definitely a step in the right direction as most coolers require backplates these days and not many people I'd imagine will use the stock cooler. Below those we can see a X bracket space just begging for a replacement to the EVGA chipset cooler. 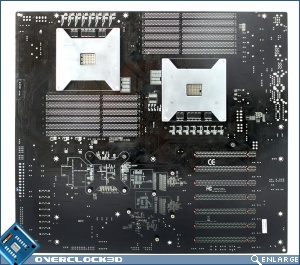 Of course, until we get one in our hands we wont know how well this all blends together, but in pure lust terms it's up there with anything we've seen recently. It's hugely over-the-top and will have a very niché audience. For the rest of us our dream PC spec has just changed, and might never be the same again.

Thanks to EVGA for tempting us with some pictures of this beast. Discuss it in our forums.

JN
That board looks totally drool-worthy. I wants (even tho I don't needs)Quote

cl0ck_ed
Wow, that looks nice. The cooler looks like its the same as the old evga 8600gts cards. lol

suenstar
I'm dreading the price, but I want it regardless!Quote
Reply