EVGA has long been known for its Nvidia graphics cards and Intel-based motherboards, but things are changing at the American hardware company. With the rise of AMD's Ryzen CPU family, it looks like EVGA has been forced to diversify, teasing their first AMD-based DARK series motherboard.

In a post titled "The Red Pill", EVGA's Vince Lucido, also known as KINGPIN, has released the first image of EVGA's AM4-based DARK motherboard. This motherboard presumably utilises AMD's X570 chipset, which is surprising given the age of AMD's 500-series motherboard platform.

Based on the image below, EVGA's X570 DARK motherboard appears to feature support for dual-channel memory and sport a design that's similar to their Intel-based Z590 DARK motherboard, offering two PCIe 16x slots that are four slots apart. This PCIe configuration makes this motherboard perfect for use with two triple-slot graphics cards.

We can see below that EVGA's AM4-based DARK motherboard uses an angled AM4 socket that has been re-oriented to allow EVGA to be more creative with its CPU power design.

At this time, EVGA has only teased AMD-based motherboards, though it is possible that EVGA may also be planning to create AMD-based graphics cards in the future. If EVGA is now working with AMD, why should EVGA limit itself to just motherboards? Speculation, sure, but if AMD can create strong enough graphics cards, why wouldn't EVGA want to work with them? 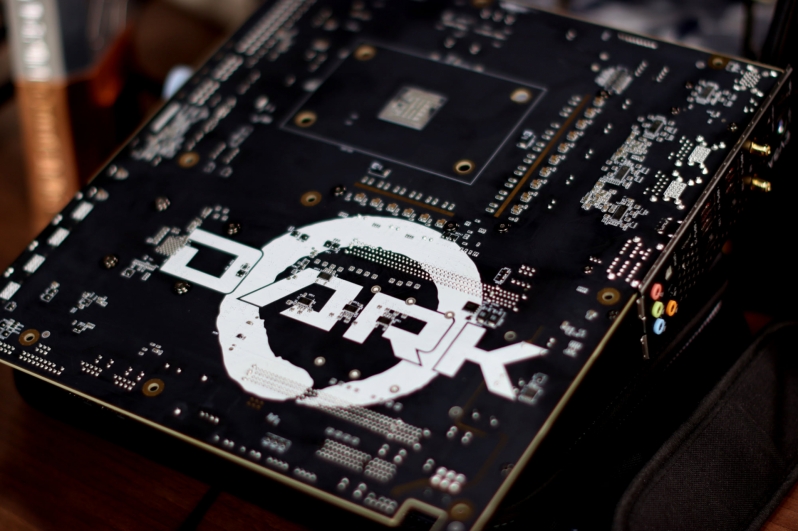 Why not wait for AM5?

AMD's 500-series motherboards have been AMD's core Ryzen motherboard platform for their Ryzen 3000 series and Ryzen 5000 series desktop CPUs. While now is a little late for EVGA to start supporting AM4, AMD has already confirmed that they plan to launch V-Cache enhanced Ryzen processors in early 2022.

EVGA is diversifying, and it will be interesting to see how their first batch of AMD motherboards compete with their existing rivals. Will EVGA be able to best their rivals with their AM4 DARK motherboard?

You can join the discussion on EVGA's plans to create an AM4-based DARK motherboard on the OC3D Forums.

Tom Sunday
The Z690 MB are out in 2-months or less. Maby the "Red Pill" by then will be half the price?Quote

WYP
AMD has new AM4 CPUs on the horizon. The AM4 socket is not a dead-end socket.

Also, how does a new Intel socket replace an AMD socket?Quote
Reply