EVGA has two Z590 motherboards in the work, and they are 'jam-packed with the latest features'

If there is one thing that EVGA is serious about, it's gaming, and Intel's 11th Generation desktop processors have them excited. With their new Z590 motherboards, EVGA will support faster processors, faster NVMe SSDs, and utilise PCIe 4.0 on their graphics cards. Z590 is a platform upgrade in every respect, and to celebrate that, EVGA has designed two new motherboards.

Meet the EVGA Z590 DARK and the EVGA Z590 FTW WIFI, motherboards designed for gaming and overclocking. Even by looking at these motherboards, we know that their gaming pedigree is strong, with EVGA being the only manufacturer to create SLI-ready motherboards with adequate PCIe lane spacing for optimal performance with multiple triple-slot RTX 30 series graphics cards. EVGA clearly considers its GPUs when designing new motherboards.

EVGA Z590 motherboards paired with 11th Gen Intel Core processors bring unprecedented speed and bandwidth to the latest graphics cards and M.2 NVMe SSDs, along with improved performance across the board. Built with the Intel Z590 Chipset, these motherboards are PCIe Gen4 ready with a data transfer rate up to 16 GT/s, doubling the previous generation. As befitting this milestone, EVGA designed and engineered these new motherboards from scratch, resulting in a pair of sleek-looking motherboards jam-packed with the latest features. Introducing the EVGA Z590 DARK and Z590 FTW WIFI motherboards – the first of a new generation of EVGA motherboard excellence. 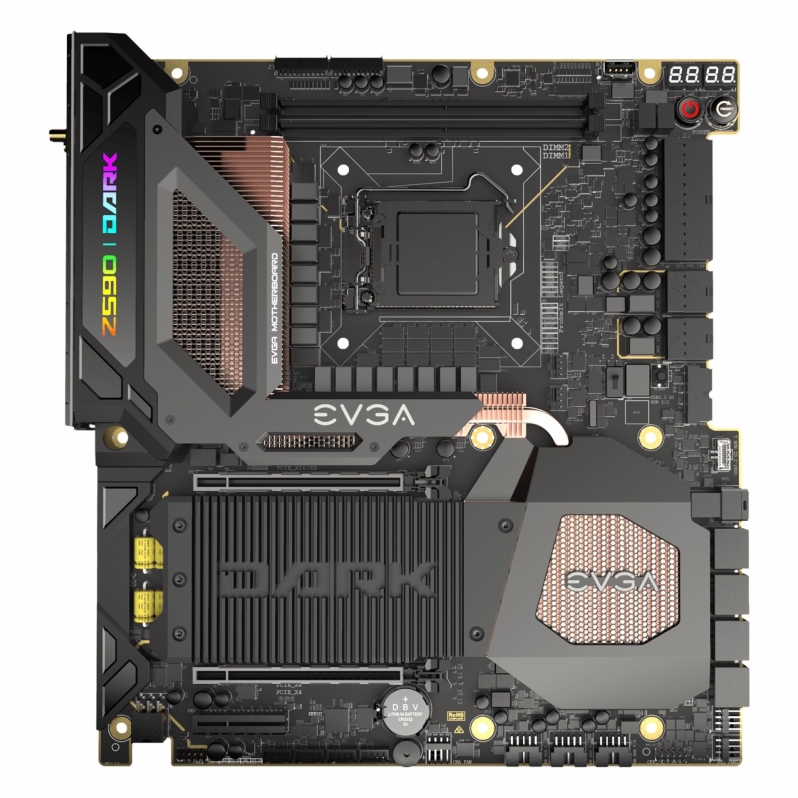 The Z590 DARK its at the top of EVGA's motherboard lineup, offering users a 22-phase VRM, a 10-layer PCB and a multitude of connectivity options. With this motherboard's rotated CPU socket design, EVGA claims to offer its users a design that offers "ever once of power available" from Intel's 11th Generation processors and that they have been "fine-tuning it to perfection."

If you want the best motherboard that EVGA can offer you, it's the Z590 DARK.

The EVGA Z590 DARK once again strikes fear into the hearts of other Z590 motherboards by combining every ounce of power available to the Intel® Z590 chipset and fine-tuning it to perfection. This armed and fully-operational motherboard is born from a 10-layer PCB and powered by a 22-Phase VRM. With support for PCIe Gen4 graphics cards and M.2 NVMe SSDs, overclockers have nothing to fear when shooting for the highest scores in any benchmark. For everyone else demanding the ultimate in performance, the Z590 DARK is loaded with over a dozen USB options, eight SATA ports, two 2.5Gbps NICs + WiFi 6/BT 5.1, 7.1 Channel HD Audio, three M.2 Key-M slots, and two fan headers dedicated to AIO CPU Coolers. We’ve even included a nightlight with the DARK’s first-ever ARGB cover for those times when you might need to see what you’re doing. As a wise overclocker once said, “Once you start down the DARK path, forever will it dominate your destiny.” and with the EVGA Z590 DARK, that destiny is sure to be filled with shattered records and countless victories on the battlefield. 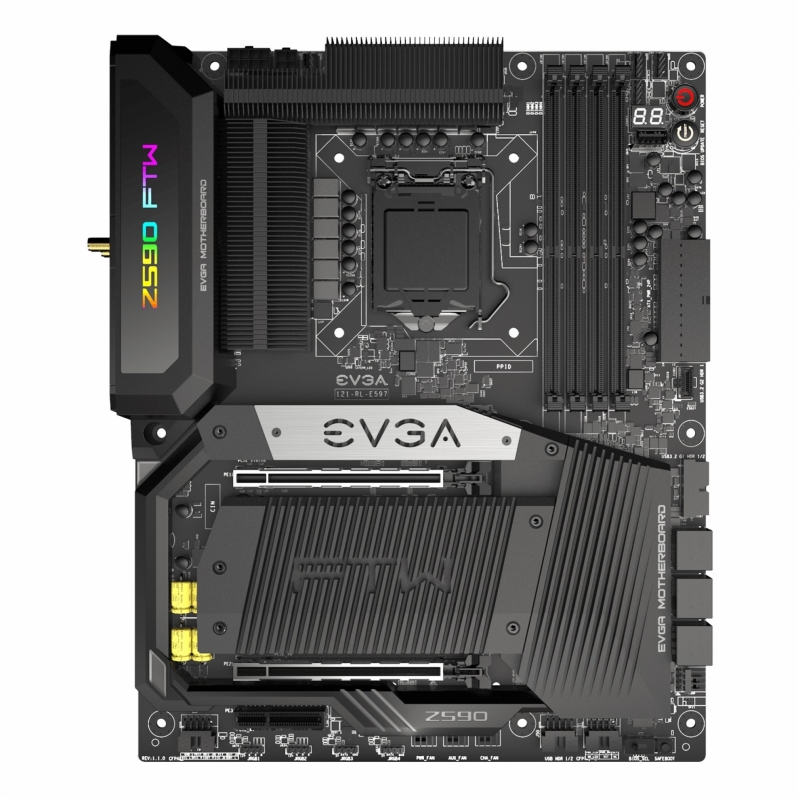 While the Z590 DARK is the best that EVGA can offer, the FTW WIFI is the board that delivers next-generation performance without going overkill. The law of diminishing returns always applies to motherboards, and the highest-end models always sell for a premium. With that in mind, the Z590 FTW WIFI offers more value while still delivering an advanced feature set.

It would be underselling the Z590 FTW to call it a lower-end model. The board features am 8-layer PCB, a 17-phase VRM, support for 4800MHz+ memory overclocking and advanced features like WIFI 6, Bluetooth 5.1, and 7.1 HD audio. This is not a low-end motherboard; it's a next-generation motherboard.

The EVGA Z590 FTW WIFI is what you’ve been waiting for to bring out the best of the 11th Gen Intel® Core™ i9 processors, which now feature support for PCIe Gen4 graphics cards and NVMe SSDs. This motherboard redefines what it means to be For The Win with a completely updated aesthetic, a rededication to maximizing the features on an ATX form factor, and an unrelenting desire to give enthusiasts all the power, performance, and stability they can handle with a 17-Phase VRM and 8-layer PCB. In addition to blazing-fast 4800MHz+ memory support, WiFi 6/BT 5.1, DisplayPort 1.4 and HDMI 2.0, and an excessive number of USB options, the EVGA Z590 WIFI also features multiple ARGB headers to customize your system lighting, a gigabit NIC, and 7.1 Channel HD Audio. The EVGA Z590 FTW WIFI is truly the next generation of FTW motherboards.

Z590 offers many new features to Intel users, from PCIe 4.0 support for increased connectivity options with support for the latest USB standards and features like Thunderbolt 4. We will learn more about EVGA's Z590 motherboard lineup as these designs come closer to launch, but for now, it seems clear that EVGA is only looking at the high-end market.

You can join the discussion on EVGA's Intel Z590 motherboard lineup on the OC3D Forums.
«Prev 1 Next»