A true successor to the Classified SR-2?

Longtime PC enthusiasts will have heard of EVGA's Classified SR-2, a monstrous motherboard which at the time was the best of the best when it came to the consumer market. The board supported up to two LGA 1366 CPUs to offer up to a total of 12 cores and 24 threads, as well as support for overclocking.

The Classified SR-2 was an iconic piece of hardware, coming from an era when Intel's Xeon processors were overclockable using higher QPI frequencies. Later Xeon processors were fully locked, making it practically impossible for EVGA to make newer Classified SR series motherboards, leading to the unsuccessful launch of the LGA 2011 EVGA SRX. EVGA built what could have been a nice overclocking motherboard, but Intel wouldn't allow their new Xeons to be overclocked, making the motherboard pretty pointless in some regards.

C621 motherboards are already available from both ASUS and Gigabyte in the form of the C621 AORUS Extreme and the ASUS ROG Dominus Extreme, already offering support for Intel's overclockable Xeon processor. With EVGA planning to release their own LGA 3647 overclocking motherboard, it looks like the company plans to retake the high-end market, offering a radically different design from its competitors.

For starters, EVGA plans to utilise a right-angled CPU socket design, tilting the board's CPU socket and memory slots in its side. This change gives EVGA more space to optimally place the board's VRMs, positioning them close to what appears to be a single right angled 24-pin connection and four angled 8-pin EPS/CPU power connectors. This design change limits the processor to a total of six DIMM slots, but with 16GB DIMMs this is enough for 96GB of DDR4 memory. 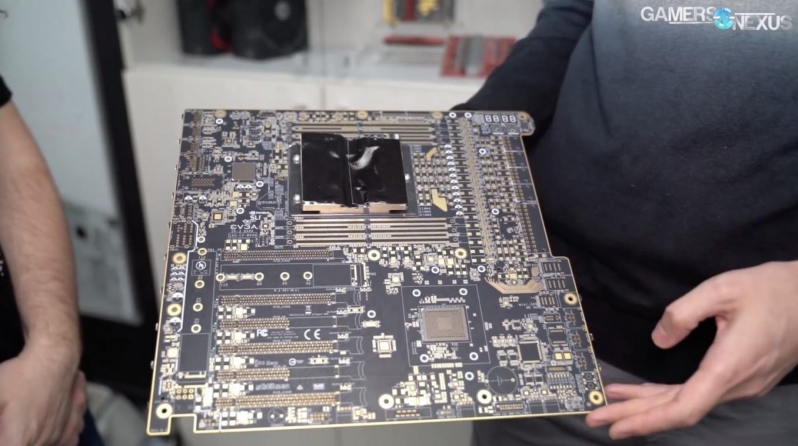 Looking closer at the motherboard we can see what appears to be two M.2 slots, three U.2 connectors and space for at least six SATA connectors. The motherboard sits within the enormous E-ATX form factor, which means that only the industry's largest cases will support this mainboard.

While EVGA did not mention when this motherboard will release, it is likely that the board will be showcased at Computex 2019 in some form. The prospect of a true successor to the Classified SR-2 is a tantalising one, especially thanks to the return of overclocking-ready Xeon processors.

You can join the discussion on EVGA's SR-3 Dark series motherboard on the OC3D Forums.

AlienALX
Hopefully this one won't be salmon

I still remember that SRX review I was creasing with laughter.Quote

Warchild
Quote:
was that the one that come out as looking "pink"?

EVGA has great hardware, but their bios always lets them down. Dont get why they dont listen to the knowledged community and take heed from the suggested changes.Quote

AlienALX
Quote:
Yeah haha. It was supposed to be red but Tom pointed out pretty much every shade of pink other than red

WYP
The new board should be all black. That seems to be EVGA's thing these days.Quote

tgrech
If there's one saving grace of the proliferation of excessive RGB it's the fact we no longer have those garish colours embedded as weird plastic & metal structures in our hardware quite as much. It's hard to go wrong with all black nowadays and not really limiting in any sense of the word, now quite the opposite.Quote
Reply