Want to water cool your CPU and VRMs? MSI has a product for you

Want a fully liquid cooled motherboard for AMD's new Ryzen 7000 series processors? EK and MSI may have the product for you?

EK and MSI have just revealed their MPG X670E Carbon EK-X, a limited run AM5 motherboard that features a custom designed EK Quantum monoblock that cools the VRM section of the motherboard and the Ryzen 7000 series processor that you have installed onto the motherboard.

EK and MSI teamed up to create this custom liquid cooled motherboard to help their customers to achieve "boost clocks that are unreachable with lower-end cooling", maximising overclocking headroom by delivering strong CPU and VRM cooling to MSI's X670E Carbon design.

At launch, this custom cooled motherboard will cost €849.90. Below is what EK had to say about their product. 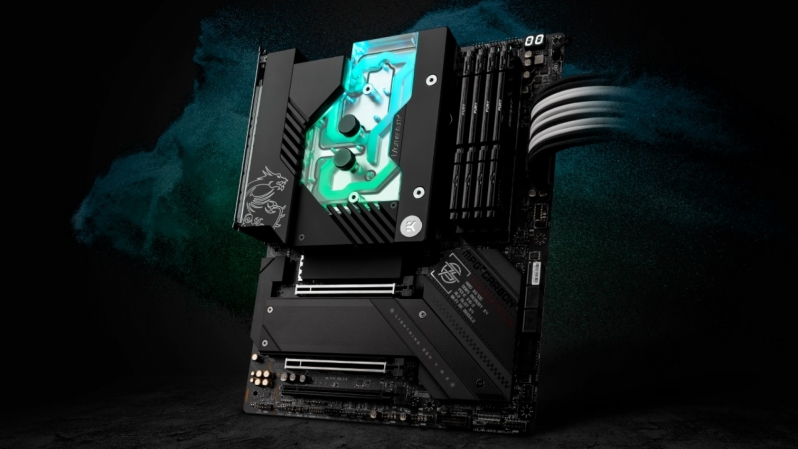 EK, the European manufacturer of premium liquid cooling gear, and MSI, a world-leading gaming brand, have traditionally partnered up to launch an X670E-based motherboard that comes packaged with a Quantum-design monoblock. This time, it will come in a Limited Edition run. The monoblock offers unparalleled cooling for the VRM section and the AMD Ryzen 7000 series CPUs, as well as a plethora of other nifty features, like the integrated flow meter and temperature sensor, allowing users to have precise checks on their loop status.

Cooling the Ryzen 7000 CPUs is no small feat, and air coolers struggle to get the most out of them. The new Ryzen 7000 series CPUs don't have a fixed frequency as CPUs used to. Instead, the boost clock is primarily contingent on thermals and, secondarily, power. Here's where liquid-cooled EK-Quantum Momentum² Monoblock comes into play. Not only does it make sure that your CPU is properly cooled, but it also ensures the power delivery system is as cool as possible. This allows the user to push performance to the limits while having a quiet system that stays as cool as possible. 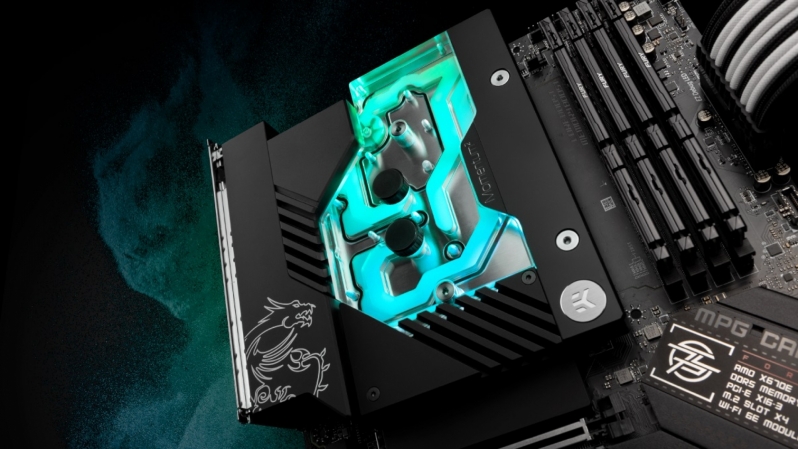 With its Momentum Monoblock, this motherboard sports a sleek, stealthy look in a modern monochrome pattern. A powerful 18+2+1 Power delivery System provides ample and stable power to the Ryzen 7000-series CPUs. The massive power delivery system allows for high overclocks and, by proxy, a significant boost in performance. The 7000 series Ryzen CPUs benefit greatly from low thermals, and boost clocks are primarily based on the temperature of the CPU. This is where the EK monoblock kicks in - to cool down both the CPU and the power delivery system, ensuring boost clocks that are unreachable with lower-end cooling.

This high-end gaming motherboard and Momentum² monoblock cooling solution are packaged separately. The cooling solution is tailor-made for the EK-Quantum MSI MPG X670E CARBON only, and this bundle takes out all the guesswork from finding the right monoblock for your motherboard. With the monoblock come a few treats and features that are so far unseen on Carbon motherboards. The integrated temperature sensor allows you to monitor your coolant temperature and (in an ideal scenario) make fan curves based on coolant temperature. This will make sure the fans spin faster only when the coolant is actually warmed up and not when the CPU has a high peak load that spikes its temperature up for a brief time.

The EK-Quantum Momemtum² MPG X670E monoblock also features an integrated flow meter. This great little tool allows the user to monitor the flow of the loop and get ideal pump speeds dialed in for optimal performance-to-noise ratio. In case of a low or diminishing flow, it can also point out any potential clogs or issues in the system.

With the rising power requirements and heat output of the PCIe gen 5.0 SSDs, cooling the M.2 drives is now more critical than ever. The monoblock cools two front-mounted M.2 drives. An additional feature is that the monoblock part that cools these solid-state drives is removable, so you don't have to empty the system or remove the entire monoblock when replacing or adding new drives, allowing for a quick, easy, and very user-friendly process. 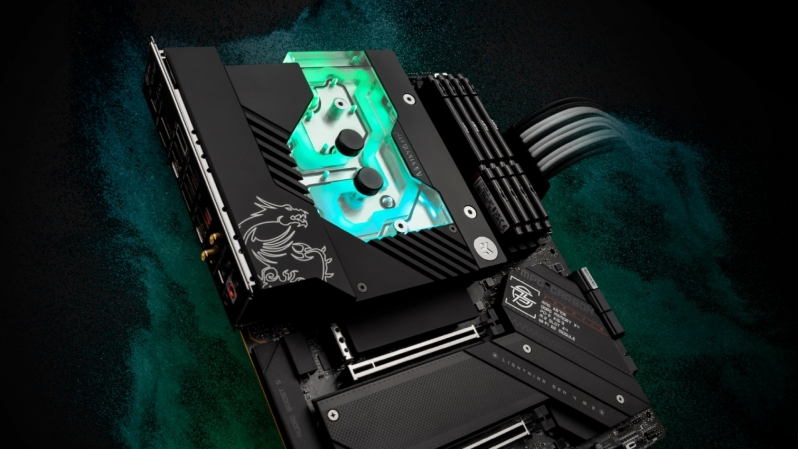 The monoblock base is made of nickel-plated electrolytic copper, while the top is made of high-quality CNC-machined cast acrylic glass material. The nickel-plated brass screw-in standoffs are pre-installed and allow for easy installation.

All EK-Quantum MSI MPG X670E CARBON EK X owners are entitled to the premium service EK provides for all its customers worldwide. If you have any questions or problems, or simply want to get in touch, reach out to us through our dedicated support channel. Even if you are new to custom loop liquid cooling, our kind customer support staff will gladly help with your initial steps to resolve any uncertainties.

The EK-Quantum MSI MPG X670E CARBON EK X motherboard is available for pre-order through the EK Webshop and worldwide retailers. This product is expected to ship out in mid-November 2022. The table below shows the manufacturer's suggested retail price (MSRP).

You can join the discussion on EK and MSI's Limited Edition MPG X670E Carbon EK-X AM5 motherboard on the OC3D Forums.