Why use two RGB apps when you could use one?

Corsair and ASUS have teamed up to bring Aura Sync into the iCUE software ecosystem. For too long, RGB software has clashed and fought for dominance within the consumer PC market, and now, two industry giants have started to deliver inter-compatibility.

With the latest release of Corsair's iCUE software, support for ASUS' RGB compatible motherboards is now available, allowing users of ASUS and Corsair hardware to control their RGB lighting setup from a single application. This support requires ASUS Aura Sync to be installed, but the software doesn't need to be running for iCUE to deliver Aura Sync support. 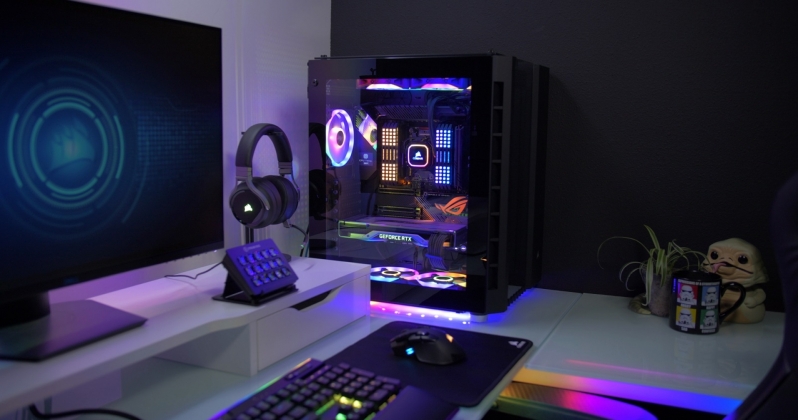 Corsair iCUE version 3.26 and ASUS Aura Sync Utility version 1.07.79, or newer, are required to bring ASUS motherboard support to iCUE. ASUS' Aura Sync software needs to be installed, but it doesn't need to be running to allow iCUE to control ASUS' hardware.

It looks like Corsair's iCUE software uses some of the files within ASUS' Aura Sync installation folder to control compatible motherboards.

This release of iCUE represents a major step forward for Corsair and acts as a call to action for all other creators of RGB lighting software. Inter-compatibility matters, and we hope that other manufacturers will follow Corsair's lead by working to make multi-manufacturer RGB lighting setups easier to control on PC.

You can join the discussion on Corsair bringing ASUS Aura Sync motherboard support to its iCUE software on the OC3D Forums.

NeverBackDown
To bad Aura Sync is so bad it crashes your system on install...

Truly awful software. I've tried installing it since it's released and never has worked.Quote

Darkdayzzz
Quote:
._. and here I sit using it each day to mess with my fan lighting cuz I like swapping it up.


Not a single problem with it...except the fact that it isn't Aura Sync anymore.


Give the ASUS Armory Crate a try, it's the new version that houses Aura and that was what worked immediately for my build. Aura Sync did not play nice, but Crate does.


They are one and the same.Quote

NeverBackDown
Just because it worked for you doesn't mean its good software. other people here have also had issues. Also, why bother saying it works for you then go on to say it's explicitly didn't, then further talk about how the completely different application works?

Thanks for the new version but I don't care to install any software from a hardware company. They all suck in my experience. Rather just avoid it. I have the RGB turned off anyway and I have a NCase M1 v6 so not like I could see it anyway.Quote

Darkdayzzz
Quote:
1 - I never said it was good software. It works as the Armory Crate version not Aura Sync. That's what I was getting at, jesus - they are the same software as Armory Crate is the updated version that now houses Aura Sync within it, Aura Sync itself doesn't exist as a download anymore (not officially from ASUS that is). Hence my comment about that, again jesus.


2 - Why did you bother to blast the software in the comment area if you aren't even using it? why bother to comment at all if all your going to do is be negative.


3 - Just cuz it doesn't work for you doesn't mean someone else who "can't get it to work" wouldn't possibly see this, see my explanation that it works as Armory Crate rather then Aura Sync, gives that a try and it works for them.

Have a good day / evening; I'm off to work on more broken stuff that should've been fixed forever ago.Quote

RobM
Don't have any issues with Aura, had to remove icue because it was so badQuote
Reply