Clock speeds and pricing have been leaked for AMD's entire Ryzen lineup, from high-end 8-core processors all the way low-end quad-cores.
These new Chinese prices and CPU clock speeds are included below, though it is worth noting that the previously leaked R7 1800 model was missing from the list.
We have converted the prices included in this leak to USD, taking into account the current exchange rate and China's 15% sales tax. Wh have compared these prices to previously leaked US prices, with end prices being very similar. These prices should not be considered final US prices, but as a ballpark figure which showcases Ryzen as a highly competitive product.
While these prices are not the same as previously leaked Ryzen pricing, though these prices are within the same ball park. It is especially interesting to see these new prices for AMD's lower-end Ryzen CPUs, with AMD's R3 1200X and R3 1100 costing than Intel's i3 7350K?
One thing that also must be remembered is that all of AMD's Ryzen SKUs are overclockable, giving enthusiasts a great opportunity to achieve great performance/$ out of their Ryzen CPUs, especially when using lower-end CPUs.

These priced will likely force Intel to reconsider the pricing of their Kaby Lake CPU lineup, as it seems like AMD will greatly upset the status-Quo. 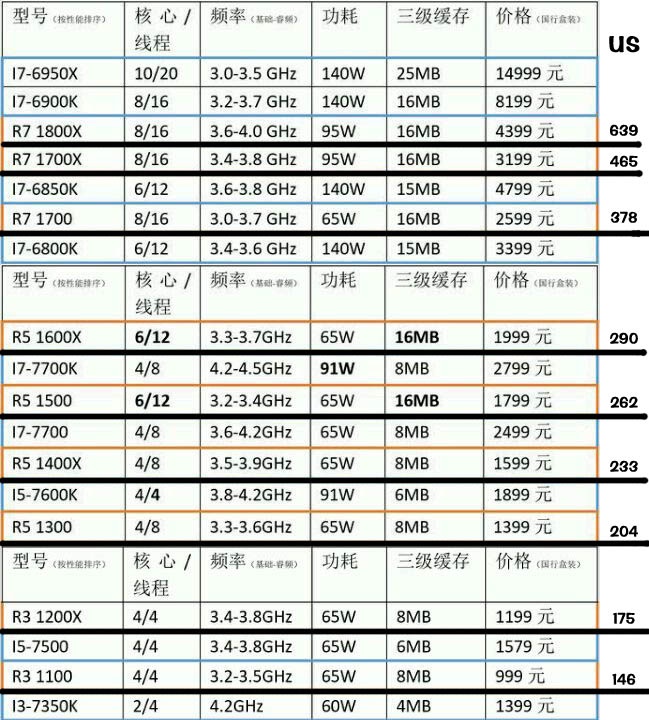 During their Q4 earnings call, AMD has confirmed that their new Ryzen CPUs and AM4 series motherboards will be launching in early March, which means that we should be learning more about AMD's new Ryzen series CPUs soon.

You can join the discussion on AMD's Ryzen CPUs prices on the OC3D Forums.

Asen
If these are the prices, soon I'm going to have a Ryzen PC!Quote

BloodOfKingu
This is exactly what the CPU business needs: competition.Quote

AlienALX
Awesome stuff. So happy, and I don't even need a CPU. Just happy for others, and hopeful about seeing a crap load more PC gamers because of this.

ImprovizoR
That 6 core seems like a sweetspot. Priced like an i5 but 6c/12t and unlocked multiplier. And only 65W TDP. Damn!Quote
Reply