PC builders will know what we mean when we talk about the Silicon lottery. Like most things, not all CPUs are created equal, some are faster, some are slower, others are more power-hungry, and others require minimal power. Typically, getting a better-than-average processor is the pure luck of the draw, but websites like siliconlottery.com can take the chance out of the equation.

Like their logo suggests, Silicon lottery cherry-picks the best processors from both AMD and Intel to sell on their site. But what happens when you cherry-pick an already cherry-picked processor? The simple answer is that you get the best of the best.

Silicon Lottery has tested Intel's i9-9900K processors to bin the best of the best chips for its customers. So far, they have found that 100% of Intel's chips can achieve 5GHz, 31% of chips can make it to 5.1GHz, and 3% can hit 5.2GHz. For these magical 5.2GHz chips, Silicon Lottery is asking for $1,199.99, revealing the cost of such silicon rarity.

Silicon Lottery's testing uses relatively low voltages for its silicon binning, with its 5.2GHz chip achieving its amazing clock speed feats at 1.325V. Higher voltages to enable higher clock speeds, or perhaps a lower AVX offset, but 5.2GHz at 1.325 volts is an incredible balance between power consumption and raw performance. 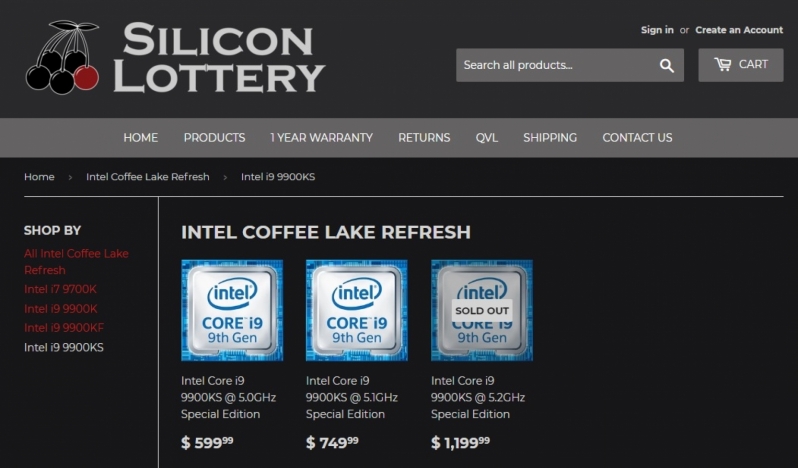 Thanks to the aggressive binning of modern processors, the margin between stock and overclocked processors has been decreasing with every passing year. With competition as it is today, CPU manufacturers cannot afford to keep much performance on the table anymore, limiting the impact of overclocking on today's high-end CPUs.

Dark NighT
1200 dollar for a bit more mhz.. not much value in that insanity if you ask me :PQuote

Warchild
Quote:
Nope but you know they will sell. the VVIP of CPU enthusiasts always purchase from sellers like this. They want the best regardless.Quote

Avet
They test with AIO. You need insanely low voltages for that. Many more 9900KS would easily reach 5.2 GHz with delid, direct die and custom water. Buildzoid stated that anything up top 1.45V is safe for everyday OC on this chips if you can cool them.

Either way it costs a lot. You can go with binned CPU and cool it with AIO, or for the same money by stock CPU delid and go custom water.Quote
Reply