When we wrote a few days ago on Intel's upcoming Broadwell-E CPUs we were amazed by the ultra high core count, bringing 10-cores to the Ultra-enthusiast market at very respectable clock speeds.

Moving to the server side of the equation we see Intel make the same leap when moving from Haswell to Broadwell on the Xeon side, increasing their CPU core count to 22 from 18 and up to 55MB of cache. 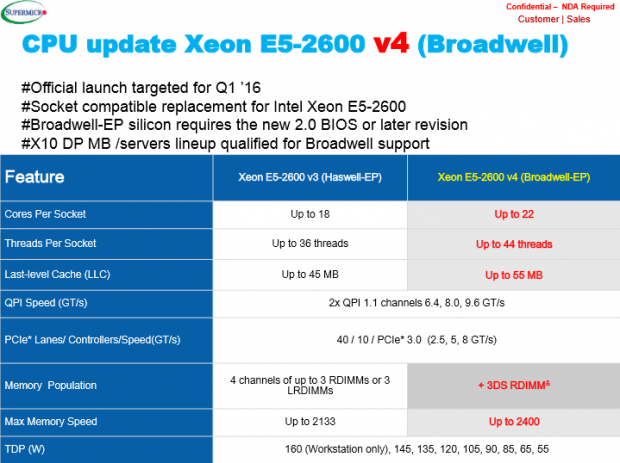 This gives Intel's flagship Xeon CPUs a total of 44 threads per socket, which is simply amazing given that most gamers only use around 4 cores or threads right now.

Right now we do not know what clock speed these new Intel Xeon CPUs have, but we don't expect it to be as High as the 3GHz 10-core Broadwell-E i7 6950X. Remember that more cores means more heat, so clock speeds will be low to compensate,  though I imagine that it will take a decent amount of cooling to make full use of 22 CPU cores.

You can join the discussion on Intel's upcoming 22-core Broadwell Xeon CPUs on the OC3D Forums.

BigDaddyKong
I love overkill, and have dreamed about building a dual socket board. I can't wait to see the tests.Quote

I have no need for such things but it is exciting stuff.Quote

NeverBackDown
Q1 16' launch date? Nice way to start the year with a CPU having 44 threads